And there's the problem with Dublin, not that anyone needed any further evidence at this point.

Kerry would've known they'd have a hell of a chance of beating the champions if they could somehow keep a lid on O'Callaghan and Mannion, and if they could stop Brian Fenton from running the show at the same time. And they actually did that.

Then Jack McCaffrey pops up with 1-3 from play.

1-3 in an All-Ireland final from a targeted wing back and it wasn't just a goal that saw him run from his own 45' to the opposition 13-metre line in 10 seconds flat, but he lit up Croke Park with the perfect hat-trick of points - a right foot, a left foot, and a fist over the bar.

McCaffrey is irrepressible when he's half in the mood and, when he's on it like he was in the drawn decider on Sunday, he proves beyond reasonable doubt that he's one of the greatest to ever play football. 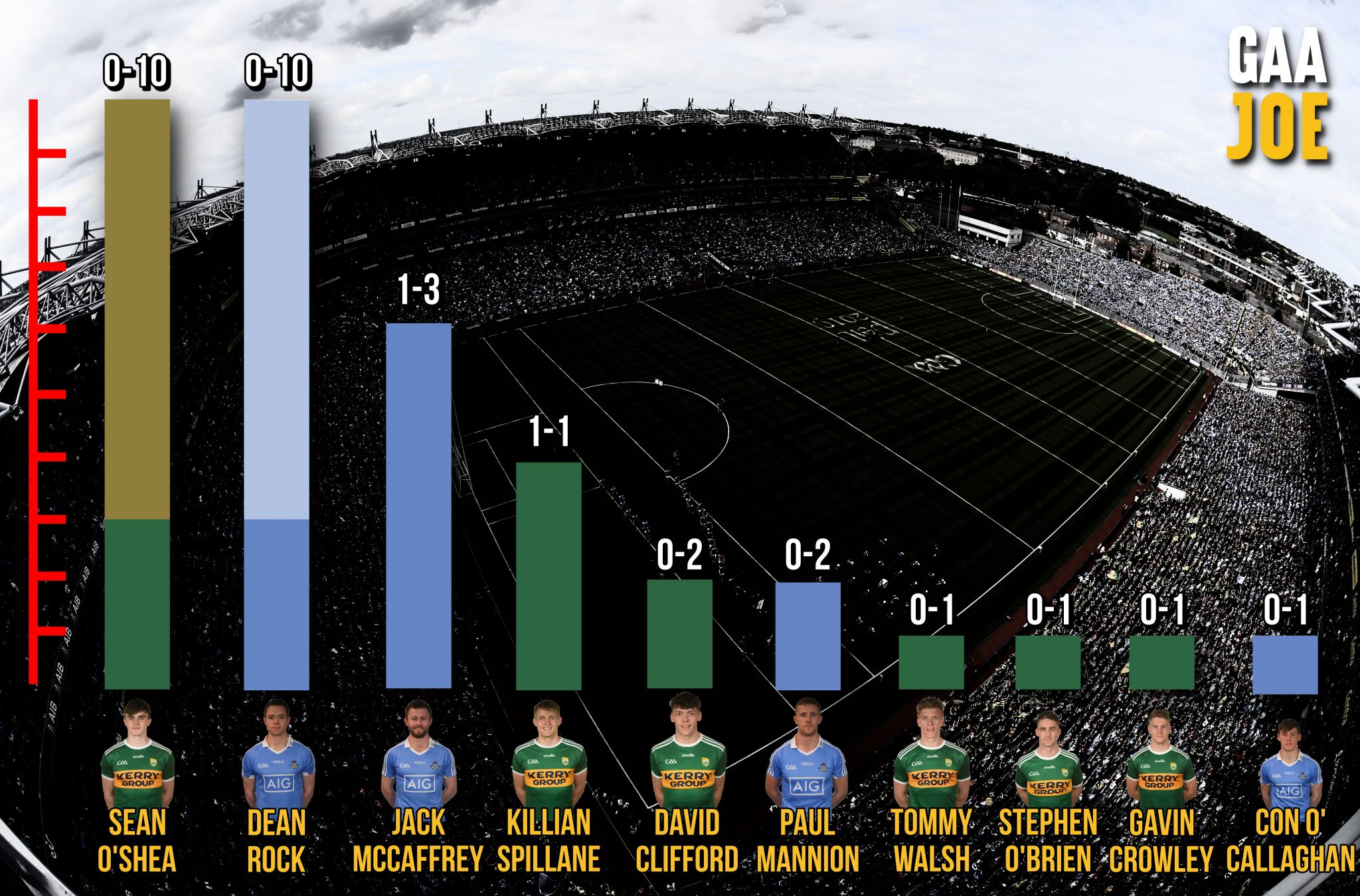 So Kerry prepare for it. They put Gavin White back in the number 10 jersey and they make a calculated decision that his pace and discipline and defensive qualities are the best bet they have to cope with the man in question.

But it's not a direct match-up, not like Paddy Durcan's semi-final job. It's Kerry trying to keep their unit together and knowing that they have the right man in place to chase if it comes to that. They don't want to risk loose one v ones all over the pitch because that's where McCaffrey causes most of the imbalances in most of the games.

And yet, in the space of one late afternoon's work, the same boy obliterated the best laid plans for him and he'd have left Peter Keane and co feeling a little hopeless with that one particular problem area.

END_OF_DOCUMENT_TOKEN_TO_BE_REPLACED

Despite the Kingdom coming into the game with a very clear strategy to bolster their rearguard and let Dublin's danger men in the engine room play in quarantined zones, McCaffrey ran through the Kerry defenders for fun.

In the first half, he had possession of the ball 10 times and only twice did he have it in his own half.

By full time, he had 22 touches of the thing with the defender taking just five of those touches in defence. 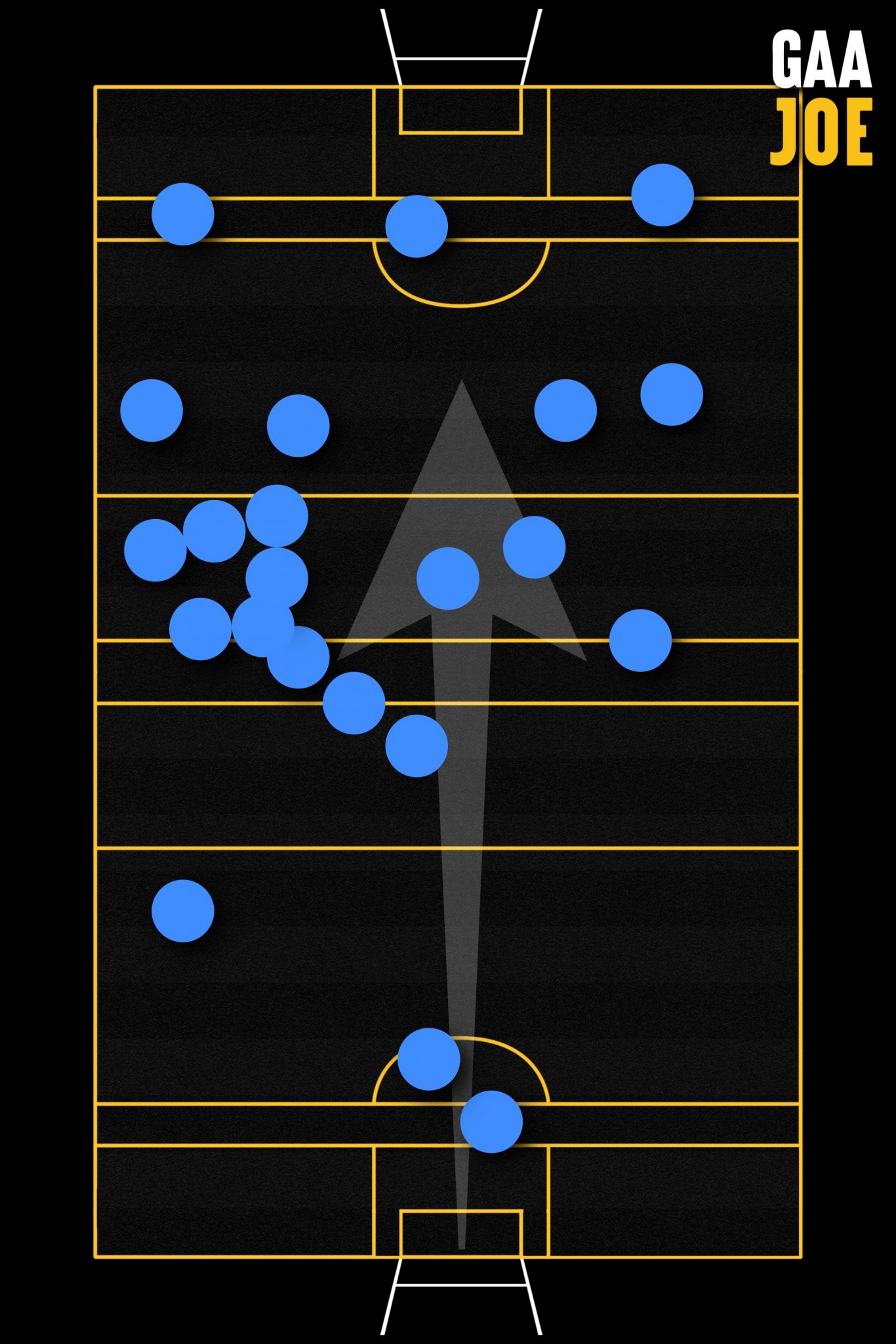 He was free to go forward because of Kerry's set-up and with Howard and Kilkenny dropping into quarterback roles in possession, McCaffrey was taking up receiver positions and doing his damage from there.

END_OF_DOCUMENT_TOKEN_TO_BE_REPLACED

The Kerry thought process was understandable. Rather than commit to a foot race with the like of McCaffrey and McCarthy, they named Gavin White and Adrian Spillane in the forward line to begin with, leaving just four in attack with the aim of not being counter-attacked by the best counter-attacking team in the game.

Jack McCaffrey doesn't need a counter-attack to come into proceedings though and even with Kerry's extra bodies in front of him, he was able to torment them and constantly get into areas to score (highlighted here where he picked up the ball for his each of his 1-3). 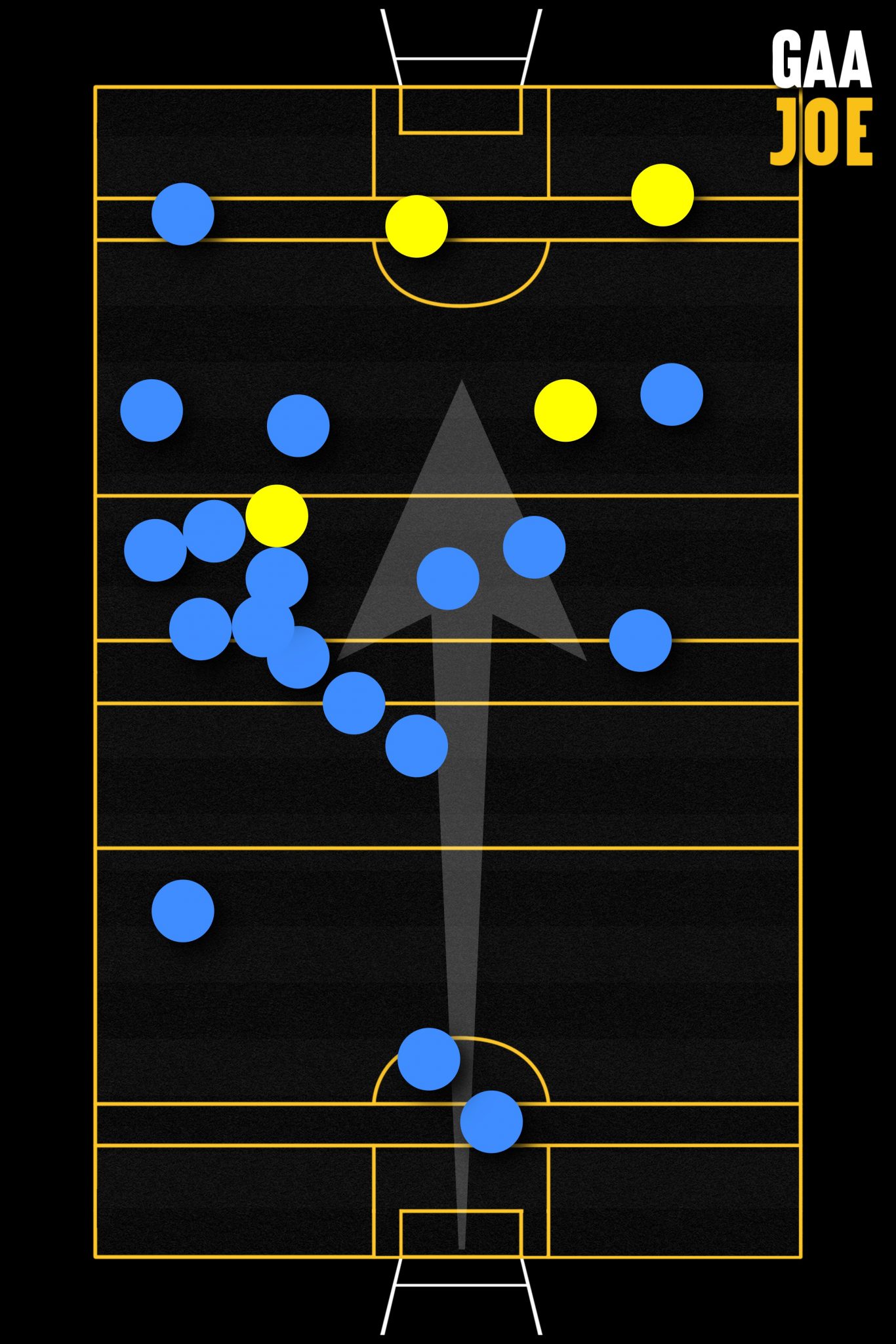 The Kerry tactic of withdrawing half forwards just liberates McCaffrey to play the game on his terms entirely.

You could see with 10 minutes to go, he was in the full forward line chasing ball with no responsibility or anxiety about his own 45'.

Spillane and White dropped, McCaffrey had the time of his life.

You see, it wasn't just a man-marking job that Paddy Durcan did so well in that semi-final. He went at Dublin in attack and was one of Mayo's most dangerous forwards. When he wasn't making incisive drives and laying in team mates, he was kicking two scores and leaving another two shots behind. He gave McCaffrey something to think about and put him on the back foot.

Kerry gave McCaffrey nothing to deliberate over. All he had to decide was which way he was going to beat one of the men standing in front of him on their heels.

Jack McCaffrey one v one

Even with deep-lying players, he still has the best ability in the sport to burn anyone and he was successful with nine one-on-one take-ons. 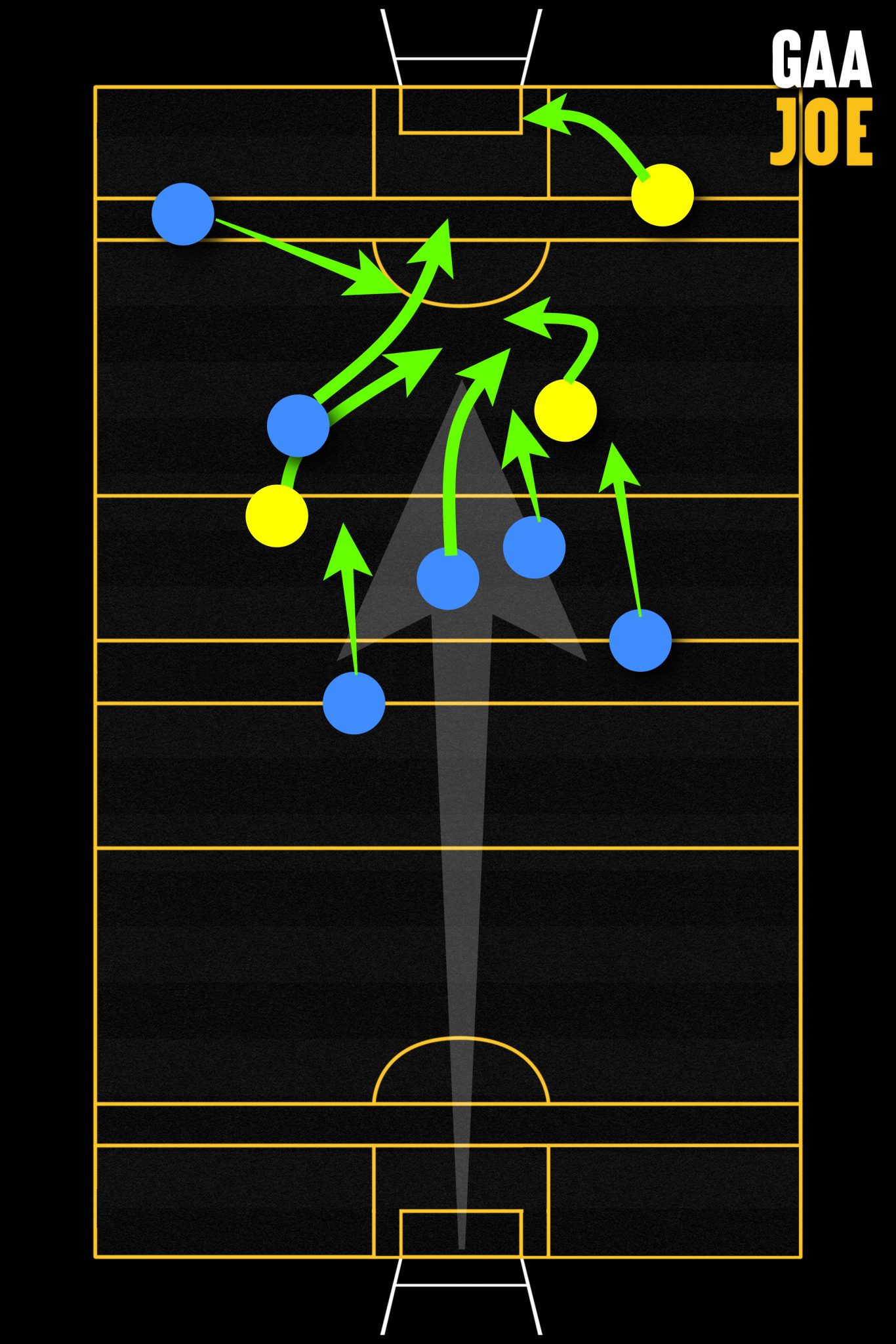 All three of his points were carved out by taking a man on and you can see the position every single one of his forays left Dublin in. He goes for the posts and he turns defenders around.

At the other end, he was beaten once himself when he was left one-on-one with Clifford and conceded a score.

But, for the most part, his defensive work was invaluable. 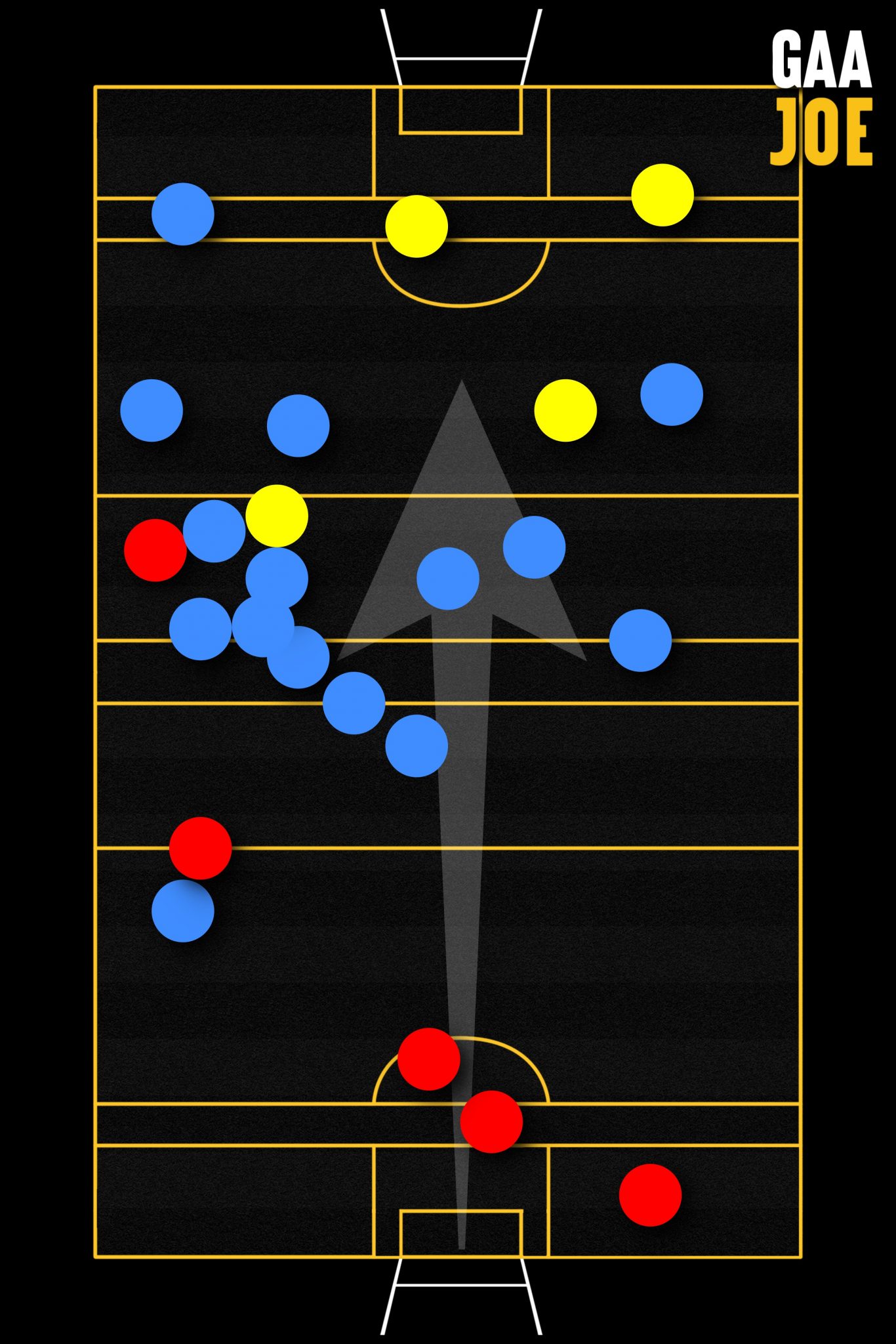 McCaffrey turned the ball over twice in the tackle - once late on with an inspiring strip of Sean O'Shea and another early on when he dispossessed Gavin Crowley in a play that led to Dublin's second score.

He won a high ball that landed in the heart of his side's backline and he forced two errors - one was Killian Spillane over-carrying under pressure and another was a Paul Geaney pass over the end line as McCaffrey tackled.

Five times he won it back for Dublin. 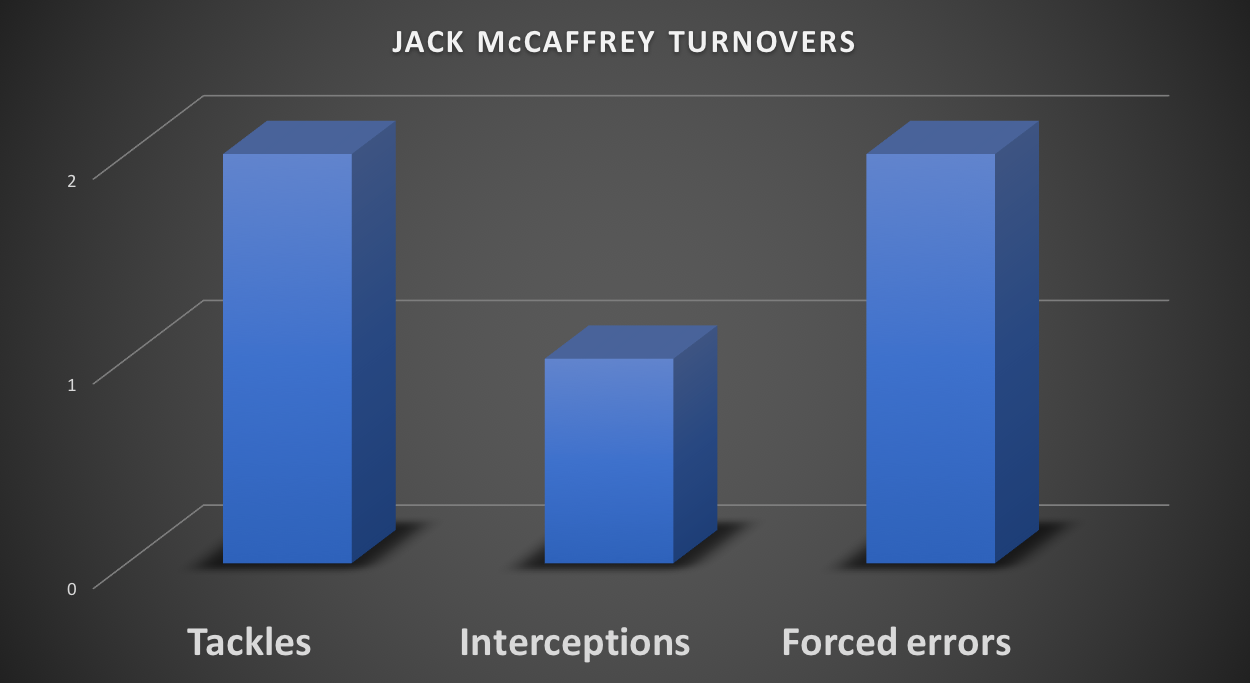 Again, without a direct opponent to worry about, he was free to roam, to put Spillane, Geaney and O'Shea under pressure in different plays and he was put under no intense scrutiny himself when he picked up the ball.

That meant he could prepare to attack himself and beat green jerseys from positions he was free to go and pick up, and it meant he never gave the ball away once in the whole game. 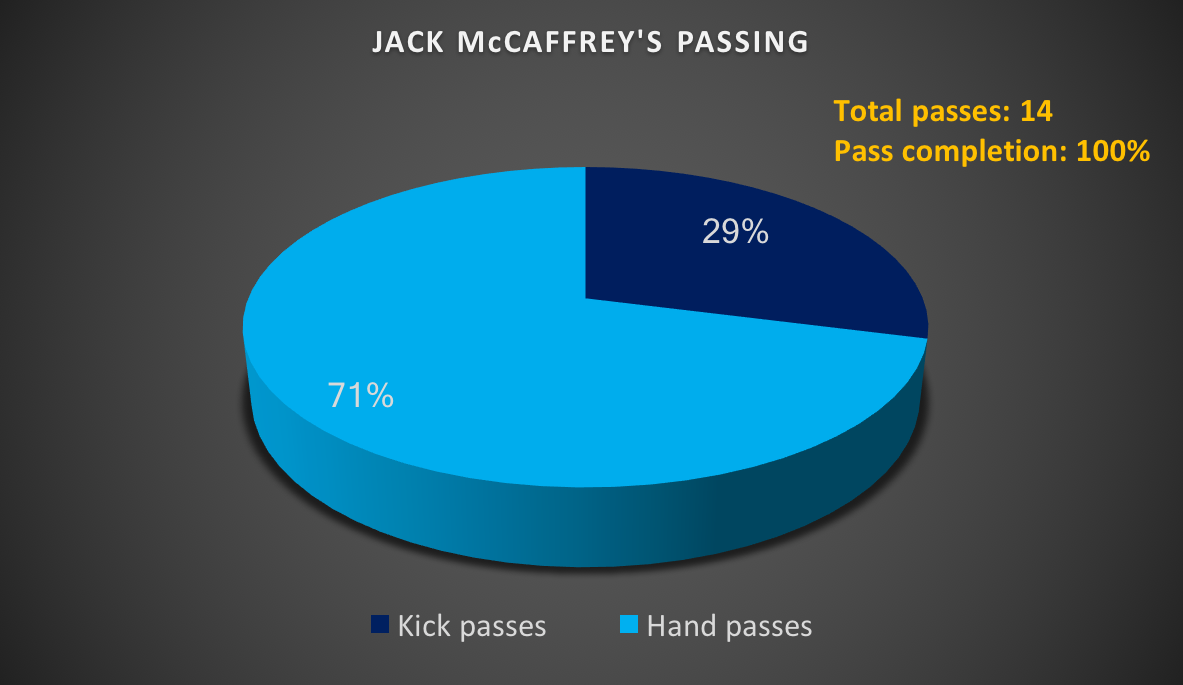 The one time he looked to be dispossessed after a run right down the middle ended at the Kerry 13', the ball broke out for Dean Rock to kick over from play anyway.

The reason Dublin are the best is that Paddy Durcan's success in nullifying McCaffrey came in a 10-point defeat, in a game where Mannion, O'Callaghan and Fenton lorded it instead.

Kerry limited those three but McCaffrey, on his own, was enough to do sufficient damage. If Kerry worry too much about restricting him the next day, they start losing something from their other plans.


popular
Carragher pushes all the right buttons and Keane delivers in gold
Jermaine Jenas' reaction to Eamon Dunphy punditry is absolutely hilarious
Ireland name team to play England
Conor McGregor's next fight narrowed down to two options
"At the end of it, you're just saying, 'thank God I didn't block that ball down'"
Rovers to continue Direct Provision initiative for 2020 season
The Tony Kelly show in the storm as forgotten man Shanagher shows his worth
You may also like
3 weeks ago
Tipperary make statement of intent with battling draw against Dublin
3 weeks ago
"I was thinking, 'Oh my God, how am I supposed to play beside them?'"
3 weeks ago
Two giants rise above the fray
3 weeks ago
Kerry vs. Dublin ends in meleé, and a draw
3 weeks ago
David Clifford leaves Dublin for dead to score sublime goal
1 month ago
The 5 best wall-ball drills for hurlers to get sharp in the off-season
Next Page