"He had to pull, you couldn't give a red for that"

Whatever way you look at it, John O'Dwyer can consider himself a lucky man.

Referees have given red cards for similar incidents with barely an eyelid batted.

Colm Parkinson would have sent the Killenuale club man for an early shower.

"I thought number one, he got him in the face and he was a mile away from the ball," said Parkinson on Monday's GAA Hour Hurling Show.

Many would agree, but both Brian Carroll and JJ Delaney had very different takes on the 38th minute incident from Sunday's Munster final.

With Ronan Maher setting Bubbles up for a fall with a proverbial hospital pass, Diarmuid Byrnes sniffed the opportunity. The Patrickswell man stood tall and let fly, driving the sliotar down the line with a swing of the hurl. 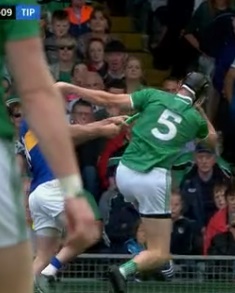 The RTÉ cameras didn't catch a great glimpse of the incident

END_OF_DOCUMENT_TOKEN_TO_BE_REPLACED

Bubbles was in the line of fire though. Byrnes follow through was coming and so, a second or two late, the Tipperary forward swings his hurl to protect himself.

He does that, but connects smack bang on the Limerick man's faceguard, leaving him panned out.

"Ah now come on now Wooly, no way, Jesus Christ you couldn't give a red for that. Like a ball popped up down the line, he had to pull, like it was the perfect ball for Diarmuid Byrnes...

"But the ball, he's a left handed hurler like JJ so it was lovely on his right hand side so he was going to let fly which he did and drove the ball thirty, forty meters down the field. So Bubbles knew he was going to get a smack of the hurl as well as probably not get to the ball in time so he had to pull. Like it was as much protecting himself as having to pull so no way that would be a red card. Jesus like what could Bubbles do, pull out of that altogether, sure that would be worse he'd be taken off straight after..."

JJ gave the Tipp man the benefit of the doubt.

"Ah now come on now Wooly, no way! Jesus Christ, you couldn't give a red for that..."

Hurling people, @jjdel82 and @BrianCarroll13, round on @Woolberto for suggesting Bubbles should have been red-carded 🤔

"Right, Ok listen, I'll take your words for it lads, I never pulled a Hurley in my life so I don't know what I'm talking about..."


popular
"Conor Murray was hung out to dry"
Kilkenny youngster pulls off the no-look hand-pass once more
"Ireland don't ever do anything different and that's the worry" - Mike Tindall
One point people keep making about Khabib Nurmagomedov is hugely debatable
Joe Rogan reveals the diet and training plan that keeps him so shredded
Former champion Mike Tyson has paid the biggest compliment there is to Tyson Fury
Conor McGregor vs Nate Diaz part 3 has a date and place, if John Kavanagh calls are taken into account
You may also like
1 week ago
The GAA Hour | Hurling | Numb hands, black cards and Kilkenny V Wexford
1 week ago
The GAA Hour | Football | Jonny Cooper interview and David Gough clarifies
2 weeks ago
Shane Walsh is ready to rule for Galway
3 weeks ago
The GAA Hour | Football | Dublin's third gear, division two bloodbath & Andy Moran positivity
3 weeks ago
The GAA Hour | Hurling | Limerick dominate Galway, Clare reshuffle & the art of hooking
3 weeks ago
The GAA Hour | Davy v Lohan, Cork workrate and mic'd up hurley carriers
Next Page