Limerick's gesture to injured Paul Browne did not go unnoticed

Ahead of the All-Ireland Hurling Final, Paul Browne described himself as being like a supporter 'with the best seat in the house'.

After Sunday's tense, thrilling finalé at Croke Park, it was hard to argue with the Limerick midfielder.

Browne was named vice captain by John Kiely as Limerick headed into the championship summer in hope more than expectation. He featured in the county's Allianz Leagues campaign but badly injured his knee (Anterior Cruciate Ligament) to miss out on the championship.

Such is the close nature of this Limerick panel that Browne has been kept within the circle and made to feel as part of a squad he has been with for nigh on a decade. The Bruff clubman was first called into the senior squad back in 2009 and has a Munster winners' medal to his name, won back in 2013.

At 28, he would have been one of the veterans of a very young squad and many players still turned to him for advice and guidance as Limerick overcame foe after foe to reach the final.

When the Treaty County defeated Cork to reach their first final in 13 years, Kiely told Browne that he wanted him at Croke Park. He didn't have to ask even once. Browne was not going to miss this for the world.

So, when Limerick were running out to the pitch to have their official team photo taken, some TV viewers were surprised to see a lad emerge from a door near the dressing room and join the match-day squad.

Who have we got here 🤔#27 pic.twitter.com/Br5ZMmqw3s

Cork's Eoin Cadogan was not the only one to spot No.27 joining the Limerick team as they left the dressing room.

You be to admire the lad casually joining the team for the run out and then strolls across for the photo #GALvLIM #AllIrelandHurlingFinal #gaa #number27 #Limericksextraman #hurling pic.twitter.com/TWWRlXgIto 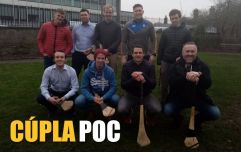 END_OF_DOCUMENT_TOKEN_TO_BE_REPLACED

That man, as it was soon pointed out, was Browne.

Walking gingerly, due to the injury that blighted his summer, Browne made his way up the tunnel and onto the pitch. There was no way the lads were letting this moment pass without acknowledging one of their longest serving foot soldiers.

Browne was not the only one. All 36 members of the panel lined up for the team snap, with their vice captain over on the right-had side:

It was a nice move from the Limerick management and summed up the collective mindset in the panel. Indeed, Kiely had campaigned for all members of his panel to be named as subs for the final and he wanted more than the starting 15 allowed to take part in the pre-match parade.

Following Limerick's 3-16 to 2-18 victory over Galway, forward Tom Morrissey paid tribute to the entire panel, saying it was not just about those that were fortunate enough to get out on the pitch for the final.

Browne also got his chance to lift the Liam MacCarthy trophy and soak in the roar of the Croker crowd.

Special moments and well deserved too.

popular
The SportsJOE 12 o'clock quiz | Day 113
Jack Charlton's role in getting Roy Keane to Manchester United has been revealed
"Never back against the Irish" - How the BBC covered our USA 94 win over Italy
Roy Keane on the experience of being managed by Jack Charlton at USA 94
Can you name every English football league club that begins with 'S'?
QUIZ: Can you name the first professional teams of these footballers?
The SportsJOE 12 o'clock quiz | Jack Charlton special (Day 112)
You may also like
6 months ago
Don't pack it all in
9 months ago
Noel McGrath overlooked for hurler of the year as 2019 All-Star nominations announced
10 months ago
WATCH: The people of Faughs GAA on what the club means to them
10 months ago
Bubbles O'Dwyer delivers when it matters to put himself on legendary track
10 months ago
Sunday Game panel split on Hurler of the Year decision
10 months ago
Tipperary bury Cats as Seamus Callanan seals Player of the Year crown
Next Page