Imagine where Mayo would be without that man Paddy Durcan

They can tell you possessions, create heat maps of action areas, point out flaws and mistakes and prove which players are most effective and most economical in attack.

They can be used in training, for progression, for monitoring, for clarity. They can support your viewpoint and they can offer something you originally had no idea about - not that you would admit it, like.

Stats can measure a whole load of things but stats can't measure heart. 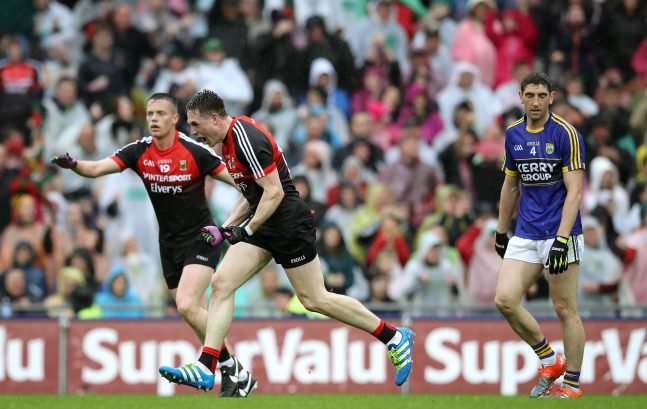 Paddy Durcan is just in his second season with Mayo and you'd swear that he was just like the rest of them, there through all the hurt and heartache and oh so near misses down through the years. He plays like a man driven by the pain of what's went before him even though he, personally, has tasted that bitterness just once.

It's not like he's weighed down by the sob stories - not yet anyway - but it's like he's fearful of them. He's heard about it, he's seen it with his own eyes and he plays like a man so terrified of slipping into those doldrums he was warned of that he'd do anything to stay out of them, even when that means putting his balls on the line.

Injury time arrived at a miserably drenched Croke Park on Sunday and Durcan waltzed up the field like he does so often and chanced his arm. He pulled the trigger, his aim disowned him, an opportunity went begging. 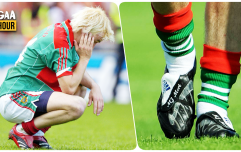 "It kind of adds to the ammunition for the people you're playing against."

END_OF_DOCUMENT_TOKEN_TO_BE_REPLACED

Three minutes later, the stakes were higher, the margins for error smaller but Durcan? He just waltzed up the field like he does so often and chanced his arm. He backed himself again, from further out this time. He pulled the trigger again. He came good this time. Again.

In the 74th minute, Paddy Durcan launched a missile from downtown and rescued another draw for Mayo to force another replay for Mayo. 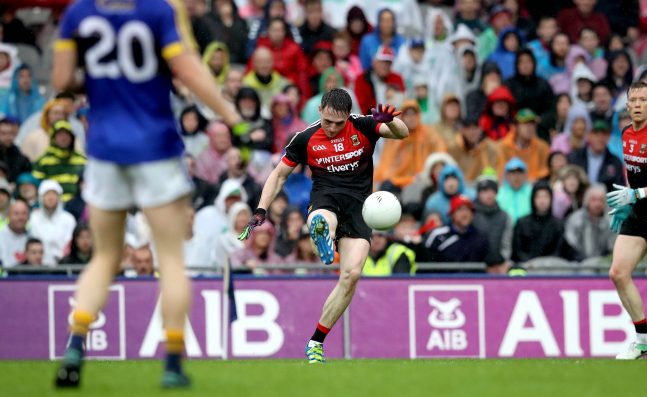 And he just loves a second half, he does.

He thrives when a game is in the melting pot and when his county is crying out for a hero.

Look at what he's done this season alone against different opposition.

Derry: Scored in the 67th minute to put a point between the teams and to end a 17-minute scoreless run for Mayo.

Cork: Put Mayo ahead in the 75th minute but it was cancelled out in the 78th minute.

Roscommon: Tied the game in the 46th minute, put Mayo ahead in 68th minute but it was cancelled out in the 73rd.

Kerry: Scored the equalising point in the 74th minute.

He also struck when shit hit the fan against Galway earlier this summer. In the 54th minute, he helped rally the county and brought them to two behind but to no avail.

Against Dublin in the replayed final last year, he hit a monstrous point in the 55th minute to put them one behind - his second of the day.

They're never just run of the mill scores either. They're always with massive distance with bigger importance. When the hour arrives, so too does Paddy Durcan time after time and it doesn't matter if Stephen Rochford plays him from the start or from the bench, he'll deliver with whatever minutes he's given.

Mayo are headed for their ninth game of this championship campaign and they're alive and kicking because of Paddy Durcan. If it wasn't for him and his nerves of steel and his fearlessness in hanging his balls out there for the whole country to see, they might not have even made it this far in the first place.

But he doesn't allow them to go under. He inspires. He delivers.


popular
Bill Shankly’s grandson asks for statue to be removed from Anfield
'War-scene' in Tyrone dressing room before 2005 final sums up an iconic team
We knew Sean O'Brien wouldn't let us down with his Lions XV
Solskjaer chats with protesting United fans who broke into club's training ground
Dream on hold for Munster fans as O'Gara agrees to new deal at La Rochelle
Keith Earls backed for Lions XV by one of the best in the game
The SportsJOE 12 o'clock quiz | Day 335
You may also like
1 month ago
"It certainly limited me, I was not at near full capacity" - Durcan's first half of steel and desire
1 month ago
"People that get All-Stars aren't just a cog in the wheel. These are the special, outstanding players"
2 months ago
25 years after her Mayo debut, 39-year-old Cora Staunton is still scoring for fun
2 months ago
De Búrca keeping positive as Fenton and Hegarty are the top dogs
2 months ago
Cavan make history as Dubs dominate the 2020 Football All-Stars XV
2 months ago
Rowe and Sheridan make the magic happen as Irish impact continues Down Under
Next Page