Ever since he made his debut as a fresh faced 19-year-old in the Connacht championship, Cillian O'Connor has been chasing down history.

He's still fresh-faced nine years on but on Sunday, another record is set to be surpassed. Some things never change.

Colm Cooper, a Kingdom genius and the finest and most prolific scorer Gaelic football has ever seen. He was out on his own, well ahead of Mikey Sheehy, Padraig Joyce, Bernard Brogan and other legends on the all-time charts but after retiring in 2017, he must have known he wasn't going to last long there.

Because Cillian O'Connor, that Ballintubber boomer was on the charge at a heavenly pace. His scoring rates haven't dipped since, he still has an unbelievable average of just under seven points a game and this weekend he should take pole position.

Down in Killarney in Gooch's back garden. What better way to do it.

On Thursday's GAA Hour Show, the lads paid tribute to a 27-year-old who has plenty of scores still left in those razor sharp boots.

"His stats are off the charts. He's just 27, which is beyond belief," says Colm Parkinson. 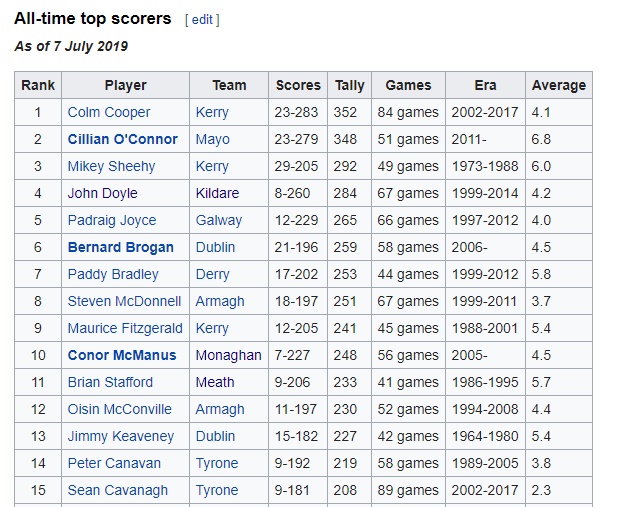 Kildare legend Johnny Doyle is fourth on the above list and he feels O'Connors' famed levels of practice and commitment are taking him to these uncharted territories.

END_OF_DOCUMENT_TOKEN_TO_BE_REPLACED

"For someone so young. He's just an unbelievable striker of the ball. You'll have the cynical people arguing that a lot of it was frees but it's still some going. It's phenomenal, by the time his playing career is finished, you'd imagine that nobody will ever break the record," says the Lilywhite.

"He could have five or six years left if he wants, credit to him...

"The hours and hours of practice he has done on his own and you can see that in his technique - his kicking technique is exactly the same every single time. He's obviously very meticulous in his preparation, it's all about his routine. He deserves some credit..."

Some of the pot-shots taken at O'Connor include the weak Connacht championship and all the frees. These don't stand up, according to Parkinson, Doyle and Doherty.

"A criticism of him is that he's in a weak Connacht championship - but which province isn't weak aside from potentially Ulster? Gooch was having easy matches against Waterford, Tipp and hammering Clare! That's not an argument against him," said Wooly.

"You have to be very strong-minded to take frees, the pressure is on. I know when I was taking frees, the thing that was going through my head was 'don't miss this' and that's the last thing you should be thinking," said Doyle.

"You never appreciate a free-taker fully until you're actually taking frees yourself," added Derry man Doherty.

Wooly Parkinson found out all about that on his travels in America.

Wooly recalls his one and only time taking frees.🤣

You can listen to the Cillian O'Connor praise, and much more from Thursday's GAA Hour Show here.


popular
Two giants rise above the fray
Conor McGregor demands apology from ESPN pundit over Cerrone comments
Kerry vs. Dublin ends in meleé, and a draw
"I want to be myself... Imitation's not a great thing, you know?"
David Clifford leaves Dublin for dead to score sublime goal
Wexford trailblazers go down but father and son show why club GAA is best
Charlton want Troy Parrott on loan until end of the season
You may also like
2 weeks ago
"Growing up, I would always have been naturally fit"
1 month ago
Mayo confirm cult hero Ciaran McDonald has joined their coaching staff
3 months ago
"I was slow, I was never a David Clifford finisher" - Moran's modesty a genuine thing
3 months ago
"You've to work, pay bills, you've to deal with these massive changes" - former AFL star driving his club on
4 months ago
GAA JOE club team of the weekend
4 months ago
Dublin City traffic is bad, but the motorways don't get any shorter
Next Page