We are three weekends away from the beginning of the National Leagues.

The best teams and the established players are out on their holidays while the rising stars and the fringe men are trying hard to make an impression.

For January, the weather here is not bad at all and the pitches are playing like they normally would in the month of April.

And so off they went, there was an eye-catching scorelines and finish in Páirc Sean Mac Diarmada and in Clones, all your football results rounded up here.

Gary Brennan looked majestic from the word go down in Waterford and the big man's relocation to the edge of the square proved effective and looks an option for Colm Collins for the rest of the year.

A majestic road running Gary Brennan leading the Clare lads out down in the Gold Coast Resort pitch in the sunny south east of Waterford #Scenic #JanuaryGAA pic.twitter.com/vWGZTC1Fs5

Paul Walsh and Ian Maguire scored early goals for the Rebels who had way too much for the Treaty in Rathkeale. 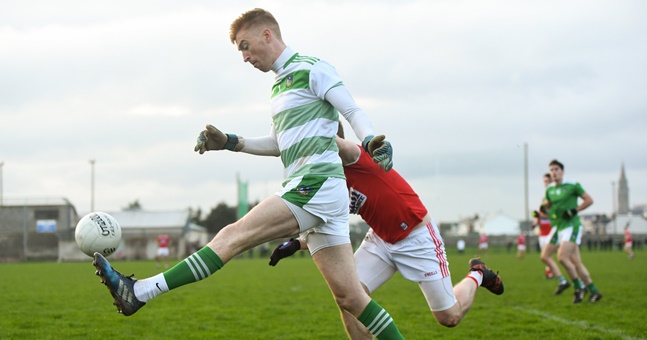 Donegal are a rising force and even without the Gaoth Dobhair lads, their young guns Ciaran Thompson, Michael Langan and Jamie Brennan led the way in their comfortable victory over Down in Páirc Esler

Cavan had it all too easy against Queen's but they will take plenty of positives from the Ballyconnell clash, especially the man of the match performance of Conor Rehill on his debut.

Bank of Ireland Man of the Match from todays #BoIMcKennaCup game against Queens University was Cavan’s Conor Rehill @CCrosserlough on his debut. 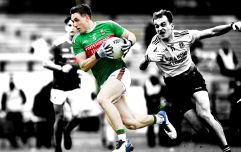 "It certainly limited me, I was not at near full capacity" - Durcan's first half of steel and desire

END_OF_DOCUMENT_TOKEN_TO_BE_REPLACED

Only two years ago, the teacher training college made history to win their first Sigerson Cup in 28 years and on Sunday they were punching high and punching hard again.

Shane McGuigan and Aaron Boyle were the heroes this time around, the pair hitting late points for the students who salvaged a draw late on.

The Slaughtneil man McGuigan hit five points, four from play on a day Monaghan struggled to contain him. 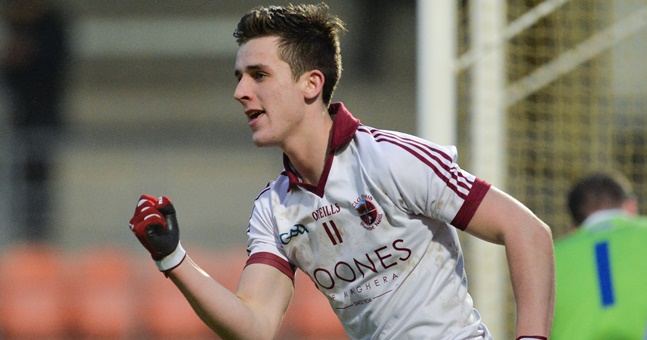 Armagh fans will be excited for 2019 already, the sight of Jamie Clarke and Stefan Campbell in the full forward line enough to get Orchard men and women dreaming.

Clarke scored a penalty on his return while Campbell was man of the match.

Derry have struggled in recent times - that's why they're preparing for Division Four - but they will take solace from this victory over last year's Ulster finalists Fermanagh. 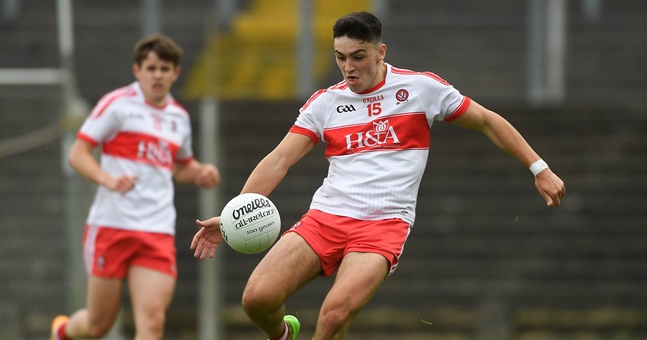 Young Ben McCarron (pictured above), a minor in 2017, was a hat trick hero off the bench for them and contributions like that one from exciting youngsters like him will have them believing again.

Man of the Match goes to Derry attacker, Ben McCarron, came on as a sub and scored 3-1

The students made Tyrone work hard but when the going got tough, Mickey Harte's men pulled away. Conan Grugan was influential in midfield and the All-Ireland minor winning captain in 2010 ended his day as the man of the match.

Peter Harte was also typically class for them, scoring 1-2.

In front of a packed Leitrim crowd, Terry Hyland's men put on a show for the diehards present in Páirc Sean Mac Diarmada.

The Mayo team was undoubtedly, an experimental one with a whole host of young guns and unestablished players given their chance but they still had Doherty, Coen, O'Shea, Harrisson and Doherty lining out.

WATCH: The Scenes in Carrick on Shannon as Mayo Leitrim goes to penalties accompanied with some sound effects and commentary from Leitrim lads behind the goals 🤣 https://t.co/Cr79A4NiJA pic.twitter.com/Kc5hkRmtoB

Leitrim deserve huge credit for their comeback in the second half and they would have won it only for the cross-bar denying Ryan O'Rourke late on.

So on they went to a penalty shootout, which Mayo won by 4-1 and you can watch all of the drama from that here.

A red card for Kildare midfielder Paschal Connell  on the stroke of half time gave Westmeath a helping hand and they took off from there. At the break, the Lillies held a one point advantage but Ger Egan took over in the second as the Lake County powered away.


popular
Six minutes was all Alan Connolly needed to score two goals and set up another
'Jesus Christ! How am I going to put up with this lad for nine weeks?!'
Sensational scenes in Belfast as Antrim edge out Clare in a thriller
"Of the 37, Bundee Aki would be my 37th most expected selection and my worst rated"
Gatland comments give insight as to why CJ Stander missed Lions call
Peter Queally vaults into Bellator title picture with stunning win over Pitbull
'Johnny Sexton completely outplayed Farrell and Russell in the Six Nations'

You may also like
2 months ago
25 years after her Mayo debut, 39-year-old Cora Staunton is still scoring for fun
2 months ago
De Búrca keeping positive as Fenton and Hegarty are the top dogs
2 months ago
Cavan make history as Dubs dominate the 2020 Football All-Stars XV
3 months ago
Rowe and Sheridan make the magic happen as Irish impact continues Down Under
3 months ago
He'll be remembered as a footballer but Keith Higgins has always been a hurler
4 months ago
Parsons bows out having left everything on the field
Next Page