Even in his final game, gifted Watson was still the danger-man

Though Dunloy pulled clear in the end, the Antrim final was gripping for large parts.

The crowd, obviously, added to the occasion but the skill, entertainment and intensity were as good as you'll find anywhere in the country. Ballycastle, that tight, daunting pitch on Antrim's sensational north coast is like a hurling hinterland, with the wind howling, the crowd hysterical and the goals shadowed by a steel railing, which clacks for emphasis every time a point is scored.

It was a six point breeze up in the Glens on Sunday and playing into it in the first half certainly did an athletic Dunloy side no harm. Gregory O'Kane's lads were clever enough to run with the ball in the opening stages, and they only shot when the score was on. The brilliant Sean Elliott epitomised this industry in possession from corner forward while Keelan and Kevin Molloy also had their radars on and eyes in.

Keelan Molloy with a clinic of point-taking in the Antrim hurling final, and this the score of the day 🏹pic.twitter.com/D7XGk8CQWW

Little separated the sides in terms of hurling ability but as Dunloy took their chances against the breeze, Loughgiel began to panic as they realised they weren't cashing in with the elements behind them. Two men who didn't panic were James McNaughton, their skilful and economical half forward, and their man for all seasons, Antrim's star turn Liam Watson.

If only the Shamrocks had gotten enough ball into their danger-man, this game would have followed a very different plot-line indeed.

But Dunloy, to their credit, didn't sleepwalk into the game and they regularly crowded the 38-year-old out with two and sometimes three men. But still, a measured sideline and a peach from play gave the Shamrocks hope. Get the ball into Watson.

Behind the goals, the kids were tearing after sliotars like calves let out to pasture. The sun was shining, the nearby beach was glistening. We had a game in the Glens.

The two-time All-Ireland champions started the second half well with Watson nailing another from play but the game turned eight minutes into the second half. A Loughgiel midfielder broke through the Dunloy cover and with only one man back, they were in serious bother. The pass was onto Watson, but with the midfielder going solo only to be blocked down, Dunloy were bouyed and the four point turnaround was complete when Conal Cunning caught the clearance and took care of the rest. 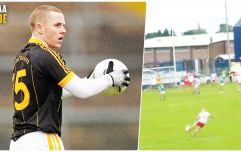 END_OF_DOCUMENT_TOKEN_TO_BE_REPLACED

It was game, set and match Dunloy by this stage. The Cuchullains have now won three of the last four championships and in a relatively young team, they won't be slowing down any time soon.

So the fairytale wasn't to be for Watson, who'd earmarked this as his final season but a late goal past ten men showed his class endures.

They'll never forget his 3-7 in the All-Ireland club final, or the day he took Cork for 0-6 from play in the championship. Liam Watson will go down as one of Antrim's finest ever hurlers, and he fittingly bowed out as the man that needed watching.

"I had a smile on my face all day. You can't win them all. Over and out, take care."

Well congratulations dunloy better team on the day. I would just like to thank everyone who has helped me play/learn the game. To all my teammates i love use all. I had a smile on my face all day. Ye cant win them all😜 over and out. Take care #allonthepitch

And with that, a legend had passed.

popular
The SportsJOE 12 o'clock quiz | Day 186
Rio Ferdinand story about Dwight Yorke conversation shows Alex Ferguson's ruthless streak
Only old-school fans will get 20/20 in this 1990s footballers quiz | Part 2
QUIZ: Identify the football club from these 12 crests
"He's found a way to do it. Whether that's good or bad for the game, I don't know"
The SportsJOE 12 o'clock quiz | Day 185
Back-up plan for Khabib vs. Gaethje title fight has pissed a lot of people off
You may also like
3 weeks ago
Match restarts after waterbreak with one team as St. Gall's are punished
3 months ago
"I don't think it's going anywhere. It's a non-runner" - McManus quenches Team Ulster idea
6 months ago
Remembering Liam Watson's 3-7 on All-Ireland club final day
7 months ago
The GAA Hour | Paddy Cunningham interview, Mayo's youth and rolling subs
9 months ago
Chrissy McKaigue and Neil McManus sleeping rough for the homeless
9 months ago
Antrim star scores 2-6 but still comes out on wrong side of All-Ireland club final
Next Page