You can sense the nerves, all around Croke Park, and no matter where you look, you can see the jitters. Tommy Walsh has slipped into trouble, Conor Browne has fumbled a ball and then, with the red lights flashing like crazy, Cian Kenny has just thrown another one away.

On the sideline, Brian Cody looks surprisingly calm but on the field, and from a Kilkenny perspective, this has been a grand old welcome to shit's creek. Hegarty, Gillane and Byrnes have all scored and you wouldn't have to be a genius to see that, right throughout their team, Limerick are on fire.

END_OF_DOCUMENT_TOKEN_TO_BE_REPLACED

So where do Kilkenny go? How do they get out of this one? Well Brendan Cummins said it on The Sunday Game and Eoin Murphy didn't even try to hide it with his puck-outs. Whenever it's going to pot and whenever Kilkenny are up against it - this is the secret - there is only one man they look for and that man is TJ Reid.

And they'll stay looking for him.

TJ failed to win the first two puck-outs that came his way but Murphy and anybody getting short puck-outs seemed to know that, regardless of if he's winning them or if he's not, you just keep on hitting TJ.

TJ won his first puck-out of the day after 11 minutes and seconds later, having been fouled by William O'Donoghue, he scored his second free of the day. From then to half-time, the Ballyhale miracle man put on a proverbial masterclass.

END_OF_DOCUMENT_TOKEN_TO_BE_REPLACED

Kilkenny scored eleven points in that 25 minute window of revival and, as he out-smarted the smartest backs in the game, TJ had a hand in eight of them. Three of them were direct assists, perfect passes that he gave to Deegan, Carey and then Mullen having gone through the mill to win the ball himself. Two more of them were frees that, again, he went through the mill to win. The remaining three were frees that he slotted over with the typical and trademarked accuracy of an assasin.

That man deserved a full tray of Jaffa Cakes at half-time but, unbelievably, he had even more to give in the second half. 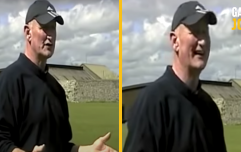 END_OF_DOCUMENT_TOKEN_TO_BE_REPLACED

The magic show restarted five minutes in, when TJ won his fourth puck-out of the day before setting Mullen up again. Mullen finished sublimely and looking back, you couldn't but notice that, from early doors to now, TJ had inspired those around him.

Mikey Carey had one of his best games of the year at half back and in front of him, buoyed by those scores, Mullen became a man on a mission. You could only laugh after about 20 minutes, with Kyle Hayes trying to get the straps right on his helmet, when Mullen just ran through him and smashed his helmet into the ground. John Kiely wasn't happy but Mullen wasn't here to make friends.

Neither was Wally Walsh, and it was a signal of Kilkenny's defence, a few minutes after coming on, when he threw Darragh O'Donovan onto the ground like a rag-doll and then threw the ball over the bar.

Wally gave the Cats a new dimension but TJ just kept on doing what he was doing.

He was at it again - it was the most breath-taking of all his breath-taking moments - after 45 minutes when he beat no lesser than Sean Finn and Declan Hannon in the air before setting up Mossy Keoghan's goal. He then went onto score frees from his own 45 yard line and from everywhere else in a display that, as good as it was, would have beaten most teams single-handedly.

Martin Keoghan narrows the gap to one thanks to a brilliant goal for @KilkennyCLG. pic.twitter.com/yWgk4y5yJF

And that was why Donal Óg Cusack's comment on The Sunday Game hit home.

"When I think of him, I think of all the great Kilkenny players," said the Cork-man.

And that's why he's one of the greatest ever.


popular
Antonio Conte 'banishes' four Tottenham players from first-team
"He can add something to our attacking line up" - Jamie Clarke signs for Northern Irish soccer club
Ranking the best county GAA songs of all-time (32-1)
"I’ve never heard someone say something as stupid” - Katie Taylor blasts Jake Paul's rematch comments
Barcelona allowed to register four new signings, but Jules Kounde misses out
Roy Keane makes three surprise picks in Man United's greatest Premier League team
"It was unfair on the Galway backs” - Tomás Ó Sé admits that Kerry benefitted from unfair rule
You may also like
2 weeks ago
Henry Shefflin's classy tribute to Brian Cody has a lovely ring to it
2 weeks ago
Kilkenny set up All-Ireland Camogie Final with Cork after seeing off Galway
2 weeks ago
JJ Delaney on how Brian Cody kept him grounded after Hurler of the Year honour
3 weeks ago
Brian Cody's final moments as manager showed the respect the Kilkenny players had for him
3 weeks ago
GAA JOE 2022 All-Star hurling team
3 weeks ago
Gearoid Hegarty sets the tone for legendary Limerick performance with a moment of utter defiance
Next Page