Daniel Flynn was absolutely crestfallen but he did himself no favours.

It was only last weekend that we were gushing about the Kildare forward's performance and goal against Monaghan at Croke Park. One week on and the Lilywhites star will be cursing himself after a silly red card at Newbridge.

Kildare and Galway played out a cracking Super 8s contest at St Conleth's Park, with the Connacht champions taking in a one-point lead into the second half.

Flynn, who had played well up to that point, let his frustrations get the better of him after 44 minutes.

Looking to get up the pitch in support of an attack, the 23-year-old lost his cool when Seán Andy Ó Ceallaigh blocked his path. Only Flynn could tell you what was going through his head, at this point, but he lashed out an arm and Ó Ceallaigh hit the deck. 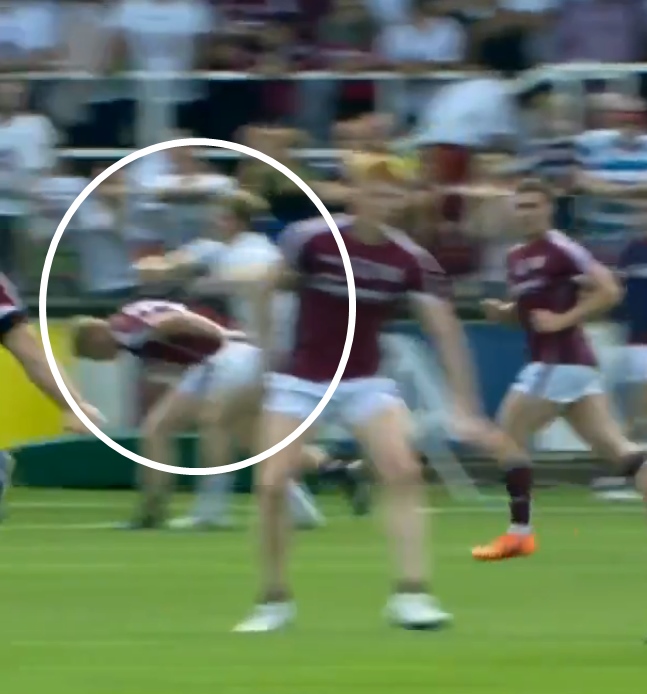 The referee did not hesitate in sending the Kildare forward off and Flynn did not protest too much.

As the game raged on, TV cameras cut to a distraught Flynn with his boots flung off and surrounded by Kildare subs. He will be only too aware of his costly actions.

Here's the incident that led to the red card for Daniel Flynn at St Conleth's Park.

Over on The Sunday Game, former Dublin star Ciarán Whelan said, "Flynn took a swing at him and you can't be doing that."

Kildare trailed 0-14 to 0-11 at the time but rallied to get to within one point (0-17 to 0-16) with two minutes to play before the Tribesmen pulled away in the closing stages.

popular
The SportsJOE 12 o'clock quiz | Day 143
Three teams Leinster can pit against each other to prepare for Munster
SportsJOE 2000s Football Quiz | Round 12
Rory McIlroy defends Dustin Johnson after Brooks Koepka comments
Collin Morikawa makes huge world rankings leap as Lowry drops back
Only a Champions League fanatic would get full marks in this quiz
The SportsJOE 12 o'clock quiz | Day 142
You may also like
2 months ago
“Talent wise he’s as good as there has ever been in Gaelic football"
3 months ago
"The bigger the challenge, the more Fitzy would want to keep them scoreless"
3 months ago
"He had no interest in the trappings of success, he just wanted to achieve it"
4 months ago
St Patrick's day memories: Rural Caltra with one of the great underdog triumphs
5 months ago
Corofin clean up in club team of the year awards
6 months ago
Shane Walsh is ready to rule for Galway
Next Page