Colm Parkinson: The handpass restriction will force managers to evolve

“You’ve got a situation now where everyone is roaring third ball you’ve to kick it. It was supposed to make the game more attractive, I think it’s doing the direct opposite. It is playing into the hands of packed defences; they back off because they know at some stage the kick has to come.”

Colm Collins was the latest manager to give his opinion on the handpass restriction in Gaelic football.

He, like many others, believe the restriction suits defensive teams. Considering this supposed advantage defensive teams will receive, surely they’re celebrating these new rules.

END_OF_DOCUMENT_TOKEN_TO_BE_REPLACED

Rory Gallagher said: “It does in no way help the game. And I know the players don't enjoy it. We don't enjoy it and I think officials, off the record, will tell you they don't like it. Everyone is entitled to their opinion; the game doesn't belong to anybody but all I can say from a playing point of view is the boys don't want to play under those circumstances.”

That’s weird, let's see what Turlough O’Brien has to say: "Everyone gets frustrated and the standard of the game goes down. I don't think today added anything to it. If you are looking at that game today you wouldn't say these rules are making a fantastic change to the game for the positive, I didn't see that."

To understand Rory and Turlough’s opposition to the news rules let’s go back to the start.

END_OF_DOCUMENT_TOKEN_TO_BE_REPLACED

There is great motivation for teams to play defensive football, especially after seeing Donegal win an All-Ireland from nowhere using the tactics in 2012. Now every team in the country gets at least 11, 12 or 13 men behind the ball when defending. Obviously getting men back behind the ball will reduce your scores conceded, but defending is only half the battle - they still have to score themselves to win the game.

The bonus for defensive teams, under the current rules in Gaelic football, is that their attacking gameplan didn’t suffer. We know defensive teams have used the counter attack to great effect and if that isn’t on they can still slowly work the ball up the field using the handpass and hope for an overload or a free and get a score. 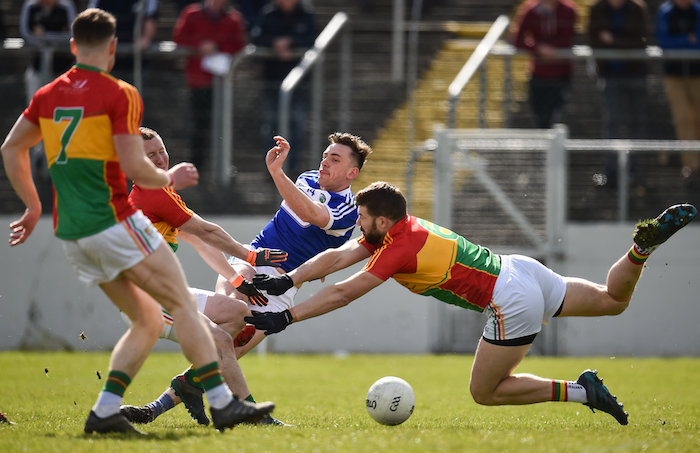 END_OF_DOCUMENT_TOKEN_TO_BE_REPLACED

Under the new rules they still have their defensive solidity. In fact, the defensive part of the gameplan is even stronger, considering the attacking team has to kick, at the latest on the third handpass. This is obviously what Colm Collins and other managers are referring to.

However what is being forgotten is that their attacking gameplan, which had been very effective, becomes useless. The attacking team can just pen them in inside their 45' and you could make a strong argument that they might struggle to get out of their own half if the press is aggressive enough. It is difficult enough to work the ball out of your half against an aggressive press using the handpass but if you’re required to kick on the third handpass it would be impossible.

Again, we need to remind ourselves of something: Jim McGuinness chose his gameplan because he could both defend and attack effectively. Would McGuinness play that system under the new rules? Not in a million years, because he’s an innovator. He would think of another way to maximise his defensive and attacking gameplans.

For me, it’s difficult to comprehend why any manager would chose to play that way under the new rules when they have no attacking gameplan.

Wooly is not one bit happy with Declan Bonner's comments on the new rules 😡@paddypower pic.twitter.com/bRxaJZo9MJ

The problem with most of the analysis of the handpass rule is that everyone is trying to plug it into systems that are currently being used in Gaelic football. However, defensive teams will have to change their systems and leave more men ahead of the ball or they will have no way out of their half. They know that too and that’s why they are opposing the new rules.

It will take time, especially with the reluctance to change we’re seeing now. We will need the entire league and maybe even a championship season before it evolves.

We know the majority of managers around the country are copycat managers. They are waiting to follow a leader like McGuinness on this. The systems they use are systems they have seen Donegal, Dublin or Mayo using on television. I’m not criticising that but it is a fact, we see it every year.

Managers around the country will need to see a team like Dublin or Mayo using an aggressive press on a defensive team on television, in a league final for example, to see how it works. Then, after the game is analysed, the penny will drop and we will see the game move back to a more orthodox formation with four or five forwards staying ahead of the ball as options for kickpasses. 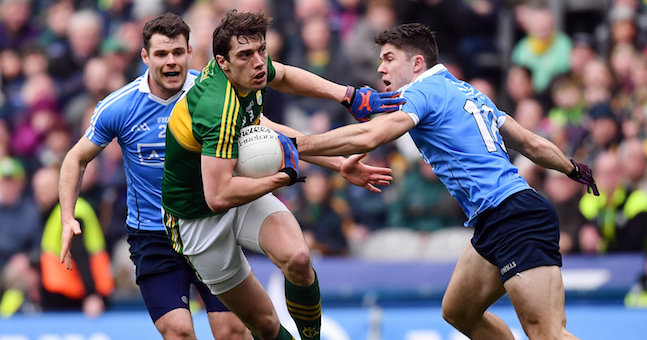 Of course sweepers will not go out of fashion and that’s not a bad thing, they’re around a long time. The increased kicking will make a good sweeper like Mark McHugh hugely valuable. His role went out of fashion in recent years of course, admitting to me once ‘they just stopped kicking it to me’.

The handpass restriction has been criticised by almost every manager I’ve read. They don’t want to rip up the work they have done with their teams and I understand that, but unfortunately they will have to. They have been programmed a certain way for the last seven years.

I understand the reluctance to change. Mick O’Dwyer loved to play ‘no hop, no solo’ games in training with Laois. He wanted us to move the ball on fast and thought too many of us were taking the hop and solo for no reason and slowing attacks down. We hated the games because they moved us out of our comfort zones and made us think immediately about a pass. Some balls were kicked away but Micko knew what he was doing.

But it’s not like we’re changing to a game alien to us. An incredible stat from David Hassan, chairman of the Standing Committee on the Playing Rules, is that in 2011 almost nine out of 10 handpass sequences ended after three handpasses.

Think about that. We’re not going to go back to the 1970s catch and kick football like some would have you believe.

We’re just going to go back to 2011, even though it does feel like a very long time ago.


popular
Sean Dyche set to be named Everton manager after Marcelo Bielsa talks break down
Roy Keane flatly rejects longstanding perception of ex-Man United midfielder Paul Ince
Allianz National Football League Round 1: All the action and talking points
Roy Keane leaves ITV pundits in stitches after Pep Guardiola's pre-match interview
Conor McGregor hit by car ‘at full speed’ while cycling
Quiz: Identify these 15 football clubs that are not named after a place
"I don't like to fill my time that way" - O'Hora going his own way in an era of obsessives and covering all bases
You may also like
1 year ago
"He's still following this soccer dream but for me he should be coming back to GAA"
1 year ago
"Football has to be about risks" - The GAA Hour discuss the issues with the Donegal club football final
1 year ago
Drama in Antrim as semi-final may have to be replayed due to error with extra time
1 year ago
Mickey Graham admits that he was "disappointed" that Proposal B was defeated
1 year ago
GPA CEO Tom Parsons believes that the league-based championship is the future of Gaelic football
1 year ago
Darran O'Sullivan says that Kerry fans are "50/50" about Jack O'Connor appointment
Next Page