Ciara Trant: From giving up on football to All Star goalkeeper

Ciara Trant had given up on football.

She played for her club St Brigid's, she came up through the underage and minor ranks but she couldn't find a way on to the Dublin senior panel, at least, not as a player.

She first infiltrated the senior side as a water carrier in 2014 and eventually got her break in the team when former goalkeeper Hannah Tyrell left the panel for rugby.

Trant deputised behind Cliodhna O'Connor and took on the new position of goalkeeper but as far as she was concerned she was essentially playing with house money.

"My initial thought was you're not a goalkeeper, they're not expecting anything of you so just go in and do whatever comes natural," Trant said at the launch of AIG’s exclusive insurance offers to LGFA members.

She was in awe of O'Connor when she first joined the senior team but eventually succeeded her in goals and now has carved out her own path with an All Star award serving as the shining light in an intercounty career that was almost over before it had even begun.

"Seeing girls I played minor football with that went straight on to the senior panel straight away, I would have been of the opinion that you can tell people that you grew up with them, you played with them, you know them, that was my take and I'd completely given up on football," added Trant.

"I'd two games in goal, that was it. I wasn't on the senior team straight away. I was water girl in 2014. We lost but to me it was such a big deal to be there and to have won an All-Ireland.

"An All Star on top was really nice for my family and I. When I take a step back and look at it I did give up and said that it was never going to happen. I got one opportunity and took it and it's been head down from there.

"It's nice to have a fancy, emotional story to tell at the end of things but I just enjoy playing football and it's probably the reason why I've managed to get a jersey and win an All-Ireland."

Trant entered the Dublin panel at a time when the Jacks were falling agonisingly short of All-Ireland success but eventually they knocked that particular door down and now their closing in on a third successive All-Ireland title. 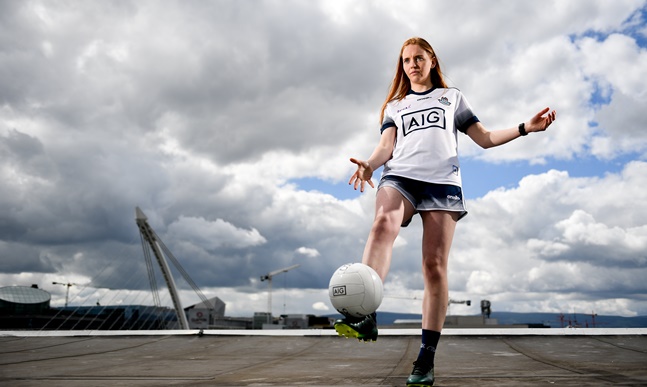 The team has changed over the years but Trant insists that it's one of the best and least confrontational groups she's ever been involved in.

"It’s definitely intimidating at first and if I were in their shoes walking into a dressing room with Sinead Aherne sitting there, I wouldn’t know what to do or where to look!

"Having All Irelands under our belt now, of course, it’s going to be intimidating but I think the girls settle in fairly quickly and we’ve great camaraderie in our team. We’ve great craic, even with management we’ve a huge rapport there.

"Football aside, we’re all really good friends and our personalities don’t really clash and it’s probably one of the few teams I’ve been on where there isn’t a personality clash.

"When the new girls come into the team, they see everyone getting along together. It’s easy then to settle in."


popular
The SportsJOE 12 o'clock quiz | Day 117
QUIZ: See if you can identify these retro football kit sponsors
Diarmuid Connolly's Boston heroics captured in stunning, evocative video
Clubs set for ticket mayhem with no more than 50 supporters per club
SportsJOE 2000s Football Quiz | Round 10
How many of the 49 Premier League clubs can you name?
The SportsJOE 12 o'clock quiz | Day 116
You may also like
8 months ago
Five key players which helped Dublin secure their historic Five-In-A Row
10 months ago
Assault, the GAA's Saipan and two winning teams – the first All-Ireland Final replay
10 months ago
QUIZ: Can you guess which club each Dublin player plays for?
10 months ago
Pillar, Gilroy and the culture change that shaped Dublin
10 months ago
How David Clifford has compared to Con O'Callaghan this year
10 months ago
Lord Mayor of Dublin teases Kerry Mayor over drive for five
Next Page