Maynooth were underdogs coming into the game but got off to a flying start and, despite being clawed back by UCD, they came good again at the death.

Darragh Warnock was the man of the moment for Maynooth as, deep into injury time, he took on the responsibility and kicked a beauty. The game was brimming with tension at that stage - UCD had scored three points in a row to level things up - but Maynooth were patient, and Warnock was the man. 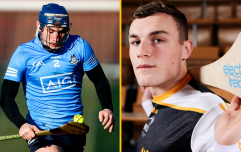 END_OF_DOCUMENT_TOKEN_TO_BE_REPLACED

It was a great win for Maynooth, a team managed by new Roscommon senior football manager Davy Burke, and it will give them plenty of confidence ahead of their upcoming Sigerson Cup campaign.

Darragh Walsh had put them in the driving seat with a cracking goal in the first half while Naas duo Darragh Kirwan and Paddy McDermott also played their part. 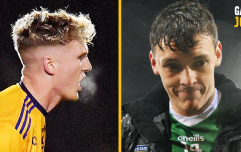 END_OF_DOCUMENT_TOKEN_TO_BE_REPLACED

UCD, managed by John Divilly, did come back but that was when Warnock, who plays for Castleknock, took centre stage. Some UCD players were protesting that the ball had gone wide but when asked about this by videographer and journalist Jerome Quinn, Warnock was quick to set things straight.

"We were working the ball across, a lot of pressure, a lot of roaring and shouting, but I just found myself in a bit of space and decided to swing a leg at it," said Warnock.

"You say it went over the bar," replied Quinn, "A few of the UCD lads weren't too sure now." 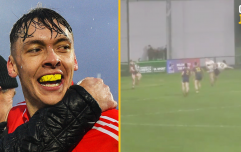 On a wet November night, David Clifford lights up the Ryan Cup with an absolute rocket

END_OF_DOCUMENT_TOKEN_TO_BE_REPLACED

"Yeah it was tight enough, but it curled over on the near post so, I'll take them all.

"We were being hassled, UCD are a great team and we knew coming into this that they would do that. I just found myself in a bit of space, I had the time, so I just had to take a breath and then swing it over."


popular
Ireland vs Wales: All the big talking points, moments and player ratings
Conor McGregor offers solution to Croke Park fiasco that should suit all parties
Conor McGregor hit by car ‘at full speed’ while cycling
Everton release brutal 59-word statement to confirm Anthony Gordon departure
Ireland team to play Wales: Andy Farrell's XV, the big calls and bold cuts
Allianz National League Round 2: All the action and talking points
WATCH: Ireland v Wales - Live stream of Women's Six Nations opener
You may also like
2 years ago
Wind, rain, pressure and all, Mark Coleman slots the most glorious line ball
2 years ago
Dream team and fact file of the final four in Fitzgibbon Cup
2 years ago
The three Kildare men putting their county on hurling map on Fitzgibbon weekend
3 years ago
Sigerson Cup Team of the weekend
3 years ago
Dublin's Ciaran Archer taking the biscuit with the cheekiest panenka penalty
3 years ago
O'Connor's wonder score from sideline the highlight as DCU's ridiculous squad march on
Next Page