Near everyone was moved to express their sadness at the loss of a true icon.

In one way or another Muhammad Ali touched all of our lives, whether it was through his sporting prowess, his charismatic charm, his incredible generosity, or his strong political beliefs. Ali transcended boxing and inspired so many people in so many different ways.

It was clear from the outpouring of tributes on Saturday that stars of all sports were hugely affected by the great man's passing. It is a testament to his legacy that so many athletes of all descriptions cite him as their ultimate hero. And most weren't even born when he was in his stupendous prime.

RIP. The Greatest Of All Time. #MuhammedAli pic.twitter.com/m3zKroLHK7

Nobody will ever come close to this mans greatness.
And if they do, they better wake up and apologise. #RIPAli pic.twitter.com/ED2wgignB2

"Float like a butterfly, sting like a bee, the hands can't hit, what the eyes can't see" RIP Muhammad Ali 👊🏾

He who is not courageous enough to take risks will accomplish nothing in life-- Muhammad Ali. #RIPAli 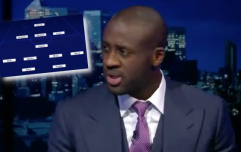 END_OF_DOCUMENT_TOKEN_TO_BE_REPLACED

Yaya Toure was one of the many to pay tribute to the Greatest. The Manchester City striker was keen to stress the impact that Ali had on African children growing up. The boxer was a regular visitor during his illustrious career, and fought some of his most memorable bouts on the continent.

His tweet, showing young Kinshasans running by the side of Ali's jeep in 1974, expressed a message that was both personal and universal in sentiment: 'RIP Muhammad Ali. You will always mean something special to me, Africa and the world. Thank you for all you did.'

RIP Muhammad Ali. You will always mean something special to me, Africa and the world. Thank you for all you did. 🙏🏿 pic.twitter.com/HFKfmi17Pq 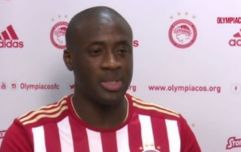 END_OF_DOCUMENT_TOKEN_TO_BE_REPLACED

If Yaya is the deep thinker of the Toure family, his slightly older brother Kolo is definitely the joker. The popular Liverpool defender also took to Twitter to mark the Champ's passing, and did so in his own unique way, which was a far cry from that of his more serious sibling.

Instead of using one of the many iconic images of Ali through the years, Kolo Toure instead posted a smiling image of himself - a shades-wearing selfie no less. His message read: 'Very sad day for all the sport world. The legend of all of sport is gone. Mr Mohammed Ali the greatest of the greatest.'

Very sad day for all the sport world.The legend of all of sport is gone.Mr Mohammed Ali the greatest of the greatest pic.twitter.com/GZI4IijrDq

The spelling of the name may have been incorrect, and the image rather incongruous, but it raised a giggle amongst many of his followers, and there was no mistaking the genuine nature of his words.

this is an excellent tribute


popular
Galway fans' frosty reception for Davy Fitz doesn't make any sense
The most Stone Age tackle you've ever seen gets South African lock straight red card
Ryan Manning hacked to the ground by Henri Lansbury in ruthless assault
'Brian was a genius... he would've killed you to even win a game of touch'
Wallabies star bounces off Duane Vermeulen like a brick wall, gets yellow-carded
"Some of the generals wanted me executed" - Irish rugby legend on flag caper that went wrong
Final question of Ryder Cup press conference has Team USA in all sorts of trouble
You may also like
3 years ago
Yaya Toure's agent takes needlessly brutal swipe at West Ham
3 years ago
11 free agents Premier League teams can still sign up
3 years ago
WATCH: Clive Tyldesley sings Yaya Toure song while commentating on Soccer Aid
3 years ago
Pep Guardiola dismisses Yaya Toure's racism allegations as 'lies'
3 years ago
Yaya Touré launches scathing attack on Pep Guardiola
3 years ago
Yaya Touré likely to stay in the Premier League after leaving Manchester City
Next Page