It is time for a United Ireland team

The Republic of Ireland play Northern Ireland in a friendly on Thursday night in the Dublin.

The match will only serve to further emphasise how having two national teams on the island is holding football back. It's time to start working towards a United Ireland team, otherwise Irish football could be consigned to the wilderness.

Reasons why there are two national teams in Ireland

END_OF_DOCUMENT_TOKEN_TO_BE_REPLACED

The separation of Ireland's football associations occurred in 1921. It happened because of a dispute that has long been forgotten.

As documented in The Irish Soccer Split, a book by Cormac Moore, the break essentially stems from a power struggle.

The island was heading towards partition and the wider tensions within the country adversely affected football more than any other sport. 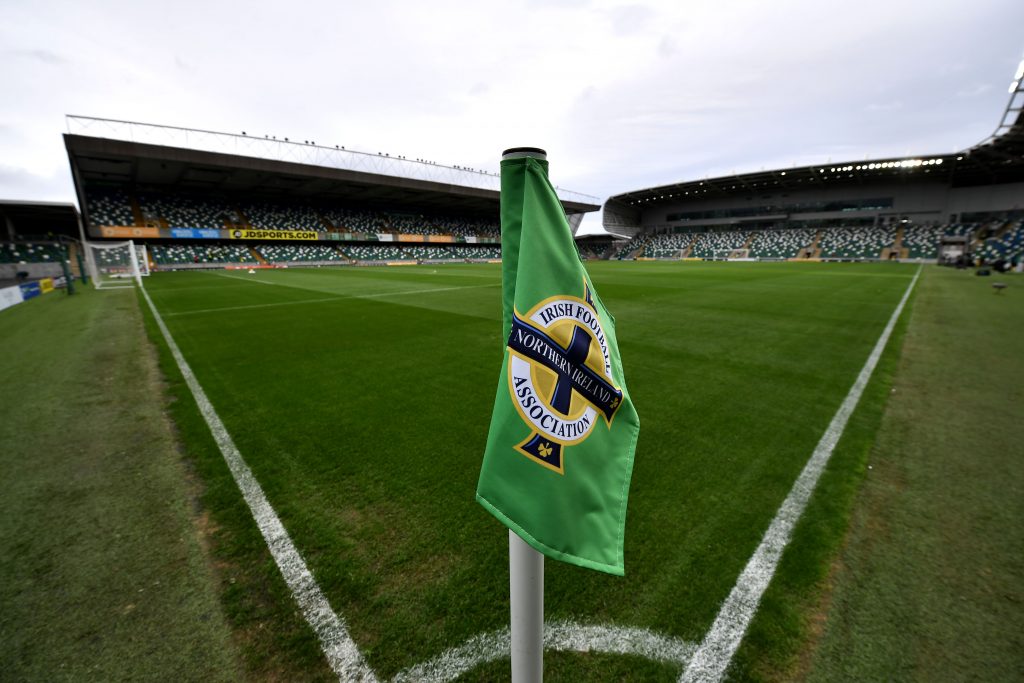 END_OF_DOCUMENT_TOKEN_TO_BE_REPLACED

The football alliance between north and south was a tenuous one over the previous 40 years. Belfast was the stronghold of Irish football at the time and teams from the north had been dominant.

The Leinster Football Association felt that the Irish Football Association was biased towards clubs and players in the north-east of the country. The final straw for them came when the association arranged an Irish Cup semi-final replay between Glenavon and Shelbourne to be played in Belfast rather than Dublin.

They said they did so because of security concerns, as this was during the War of Independence. Down south, Leinster were furious and broke away to form their own association - the Football Association of Ireland. 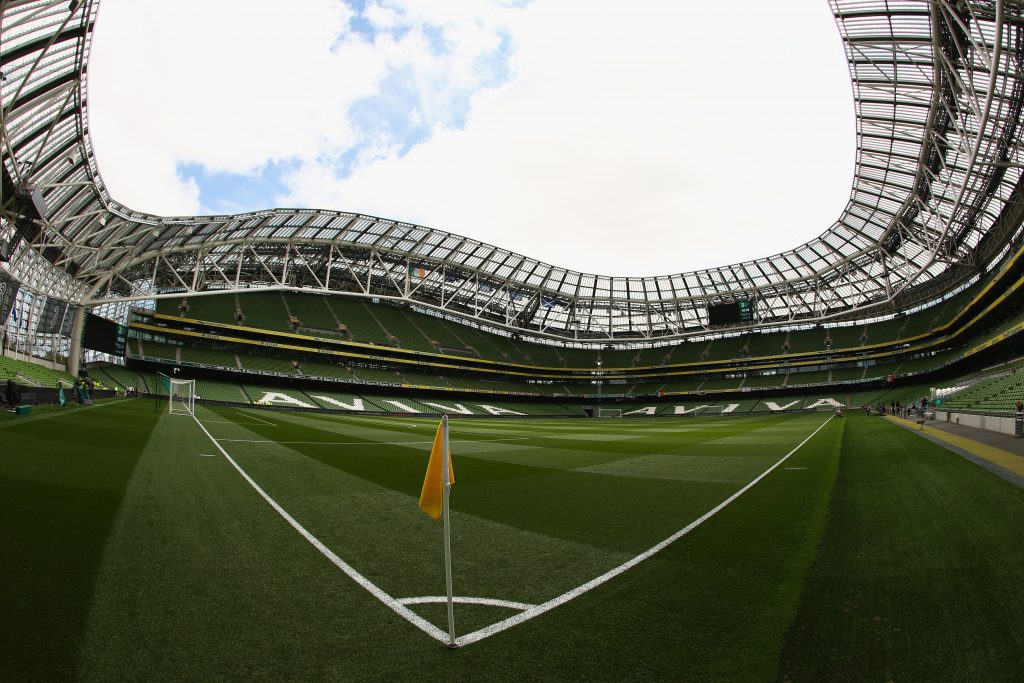 END_OF_DOCUMENT_TOKEN_TO_BE_REPLACED

Almost 100 years later, this small island is no longer capable of hosting two competitive international teams. It is time to pool resources, to create a single international team to represent the island of Ireland. There are more reasons to do so than there are arguments against it.

Declining number of Irish players at the top level

Just as the wider context on the island has shifted immeasurably since 1921, the conditions that enabled Ireland to have two competitive international teams have long changed.

Irish players once populated every top team in England. Of the Irish footballers, from north and south of the border, that migrated to play in England between 1946 and 1955, 95 played in the English First Division. 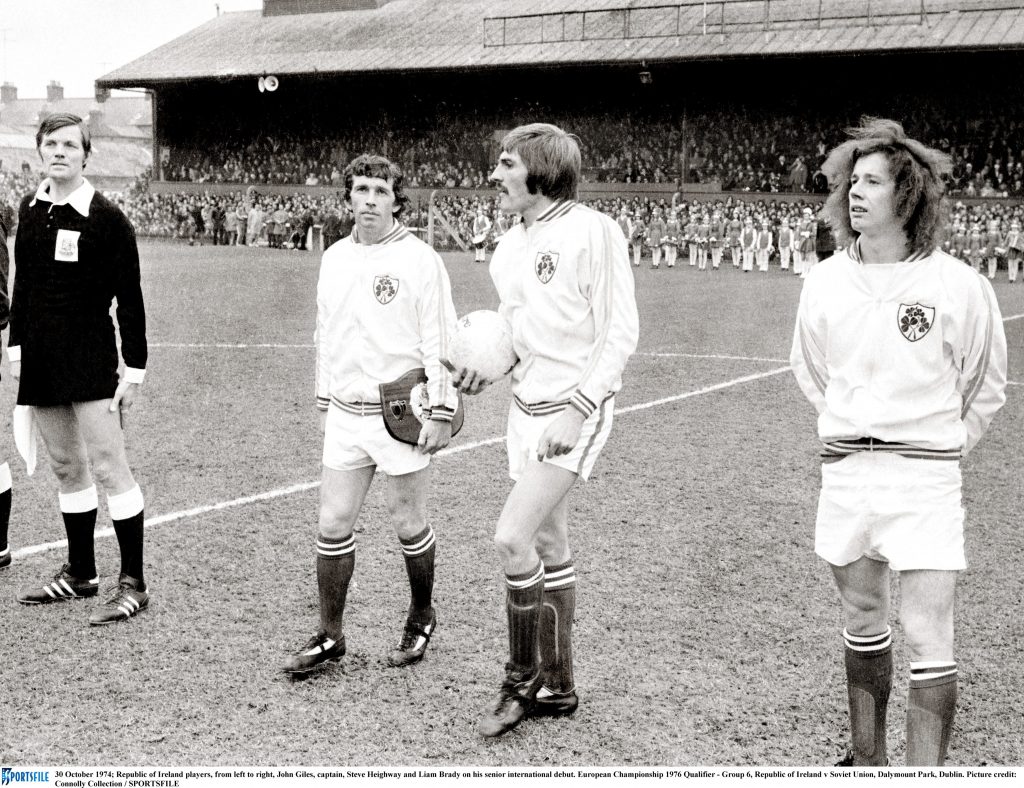 Of the Irish footballers that migrated to play in England between 1976 and 1985, 50 played in the top-flight. Between 2006 and 2010, just nine of the 67 Irish players who went to make a career in England made an appearance in the top flight.

At this declining rate, how many Irish-born players will be featuring regularly in the Premier League in 10 or 20 years' time? 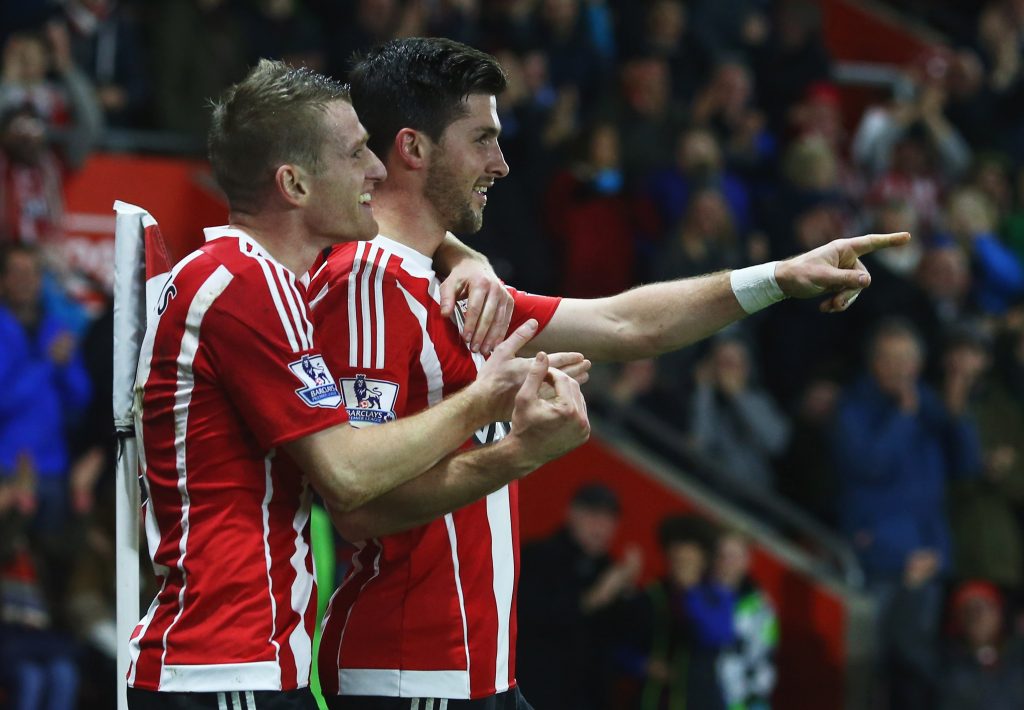 The national teams aren't as successful as they once were

The context at international level has also changed significantly over the last few decades. Between 1982 and 1994, the Ireland national teams experienced unprecedented success on the global stage.

Northern Ireland reached the 1982 World Cup in Spain, where they beat the hosts, and qualified again in 1986.

The Republic qualified for Euro '88, they reached the quarter-finals of 1990 World Cup, where they lost to hosts Italy, and got to the last-16 of the 1994 World Cup.

During this period, neither side needed the other to be competitive. 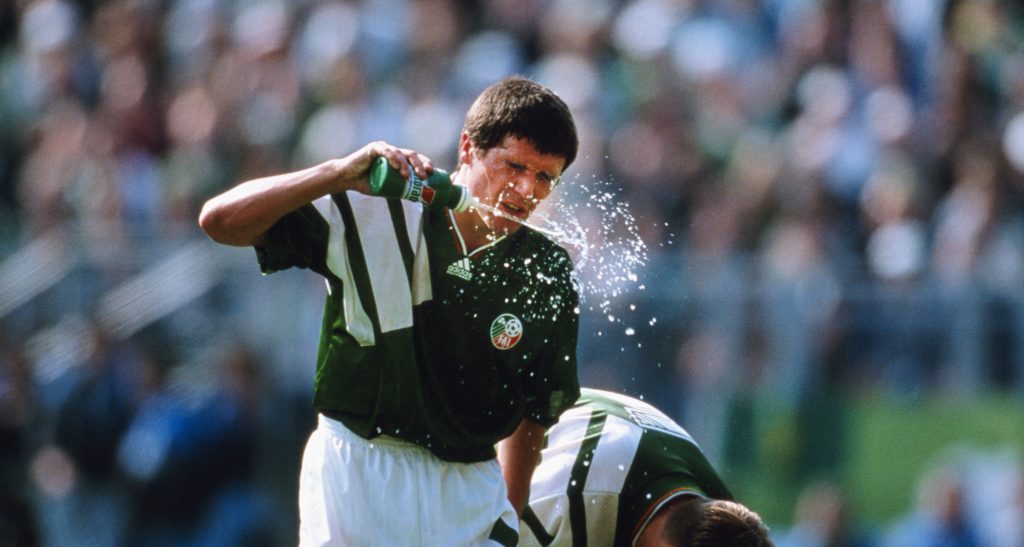 However, in the 24-years since the Republic qualified for the 1994 World Cup, their success has nosedived.

The island of Ireland has had a team reach the World Cup just once in this period - when the Republic qualified for the 2002 World Cup.

They qualified for Euro 2012, where they were hammered by Croatia, Spain and Italy and scored just one goal.

Both teams reached the last-16 of Euro 2016, the largest European Championships in history featuring 24 countries. 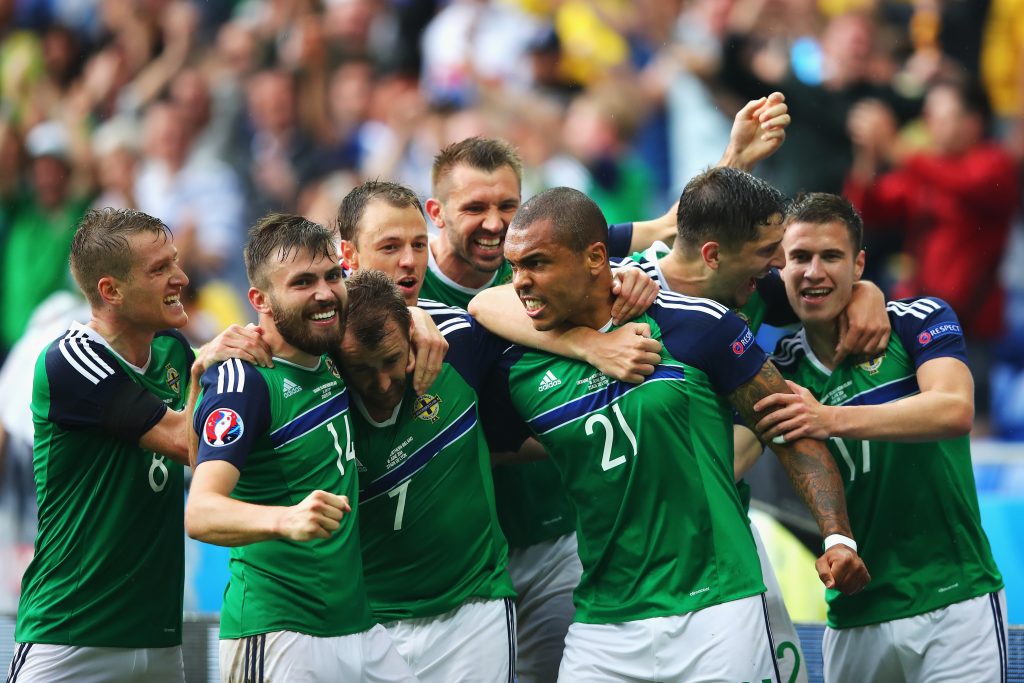 Both teams lost in the World Cup playoffs last November, albeit in contrasting circumstances.

Both teams are on course to relegated from their Uefa Nations League group when the campaign concludes over the coming days. Both face tough times in the years ahead.

Support for a United Ireland team

Moore writes that there were attempts to form a United Ireland team in the 1970s, and there was support for the idea from both sides. But the violence and bitterness of the Troubles meant it never got off the ground.

A United Ireland side, under the guise of a "Shamrock Rovers XI", played against Brazil in a friendly at Lansdowne Road in 1973, at the height of the Troubles. There were 12 players from the Republic and seven from the North in the squad.

John Giles, Pat Jennings and Martin O'Neill were among those to take part in the 4-3 defeat to the then-world champions. 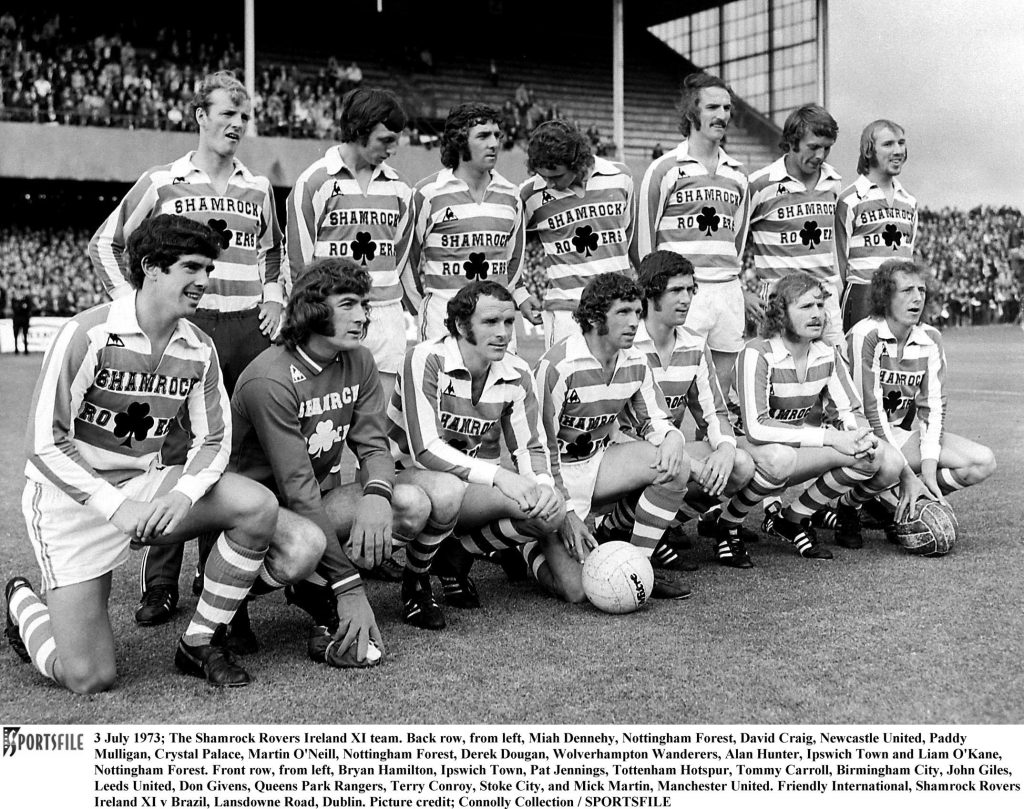 "The two associations didn't agree with the match being played," Giles said.

"Or they didn’t support it, but we were footballers. People like Pat Jennings, Martin O'Neill – I felt similar to them, that it was an honour to play with them."

The players have always generally been in favour of a United Ireland team, particularly George Best, one of the greatest footballers to come from the island.

Norman Whiteside, a Protestant from the Shankill Road in Belfast, a loyalist stronghold, was best friends with Paul McGrath, a Catholic from Crumlin in Dublin, when the pair played for Manchester United in the 1980s.

If there was United Ireland team, the players would probably be the last to object to it. When it comes down to it, they're all Irish, despite coming from different backgrounds. 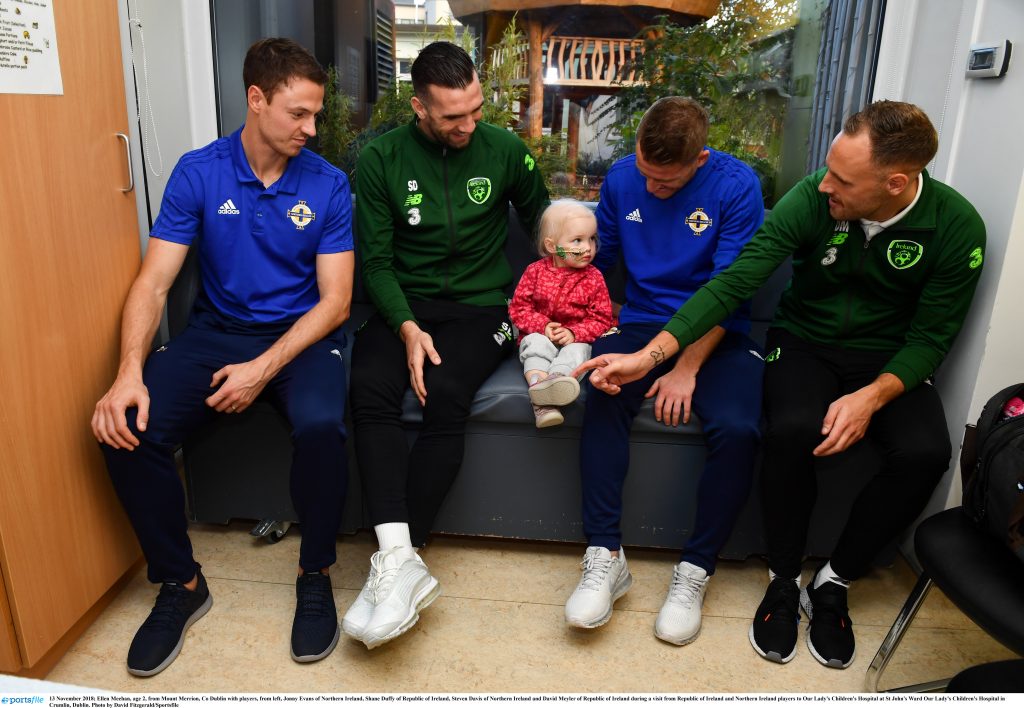 Compromise for the greater good

For a United Ireland team to happen, it would require compromise on both sides regarding cultural symbols - such as flags and anthems. And some self-interest would have to be set aside. But this compromise would be a small price to pay to gain a national team that represents the entire island.

The two associations could also continue to operate. They would possibly form a federation to oversee the governance of the national team. They would also work together and share the responsibility to develop players, instead of trying to poach young players from the other side.

A national domestic league would also be beneficial to clubs from north and south of the border. 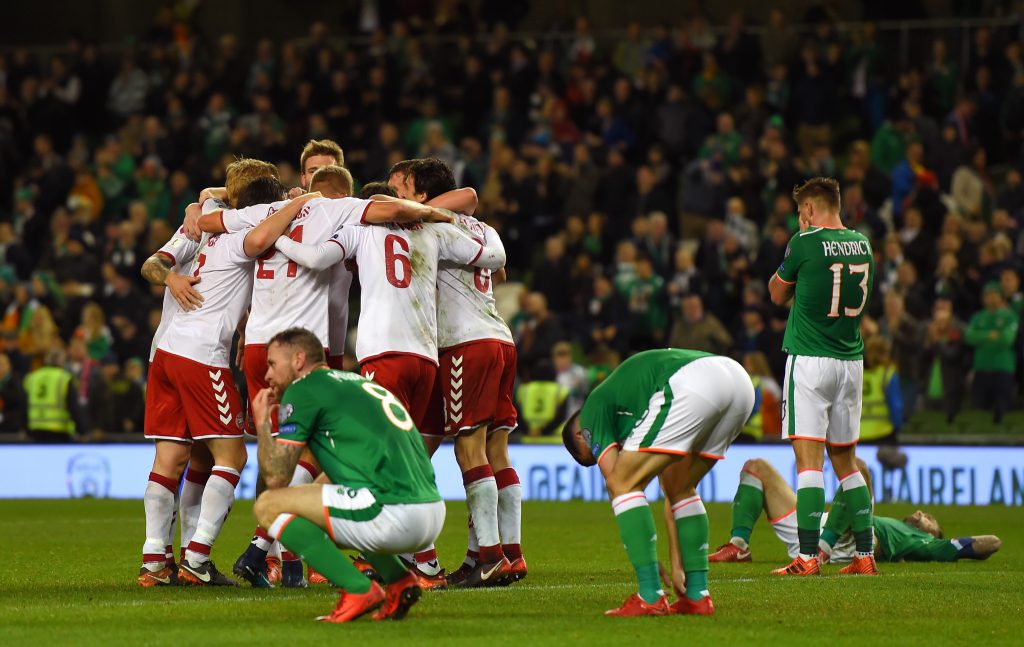 Ireland could be set to bid for the 2030 World Cup as co-hosts with England, Wales, Scotland and Northern Ireland. Imagine a United Ireland team representing the country on home soil in a World Cup.

But the case for a United Ireland team isn't based on sentimental reasons. It's about practical concerns.

The fortunes of Irish football have declined since the game became globalised in the 1990s, as it has for several small and medium-sized countries.

The signs suggest it will only get worse unless a proactive approach is taken. Holding on to the past will consign Irish football to the past. Some radical change is needed if the island is to be competitive again on the international stage.


popular
Kilmacud Crokes to counter Glen's objection over extra players in All-Ireland final
"He's a serious specimen, 6 ft 3 as well, so he's an incredible athlete" - Geaney hails O'Connor's impact
January transfer window 2023: Follow the latest updates live in our hub
"It's very clear how I felt about it. I had a very definite view on it" - McEntee on Dunboyne's 2005 semi-final saga
"He didn't give me that jersey back!" - Johnny Sexton on new rival Jack Crowley
Roy Keane on Man United's two most improved players since Ronaldo left
Roy Keane's threat to Cesc Fabregas about 'pizza incident' has panel in stitches
You may also like
1 month ago
Roy Keane cracks ice cold Ireland joke after France lose World Cup final to Argentina
1 month ago
Ireland reportedly line up Lee Carsley as next national team manager
1 month ago
Talksport presenter puts Martin O'Neill to the pin of his collar over Declan Rice and Jack Grealish
1 month ago
UEFA fine FAI €20,000 for Ireland dressing room song
1 month ago
The 10 England World Cup footballers who could have played for Ireland
1 month ago
Shay Given on how far Ireland could've gone at the 2002 World Cup with Roy Keane in the team
Next Page