Tottenham boss Mauricio Pochettino confronted referee Mike Dean after his side lost 2-1 at Burnley on Saturday - a result which all but ends their hopes of winning the Premier League title.

Spurs had fallen behind twice at Turf Moor in the second half, the first time via a Chris Wood header which came from a corner which appeared to have been wrongly awarded.

The ball went out of play after a sliding challenge between Burnley's Jeff Hendrick and Spurs' Jan Vertonghen - replays showing the final touch had appeared to come off the Irish international.

apparently this a corner to burnley which led to them scoring fuck this officiating pic.twitter.com/eAApi3yVUl

Though Harry Kane later equalised on his first game back from injury, Ashley Barnes was able to score his side's winner from close range with seven minutes of normal time remaining.

At full-time, Pochettino, flanked by some members of his coaching staff, made a point of seeking out Dean and his officials.

The former Southampton boss appeared to repeatedly be saying “you know very well," to Dean before he was eventually pulled away from the referee and making his way to the dressing room.

Mauricio Pochettino was NOT happy with Mike Dean at full time! 🤯 pic.twitter.com/w0r0FTRUiI 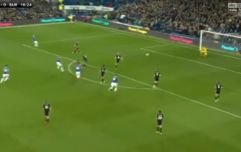 END_OF_DOCUMENT_TOKEN_TO_BE_REPLACED

Pochettino was asked about the incident with Dean during a post-match interview with Sky Sports but declined to go into details. He did, however, admit that his reaction was out of character.

The defeat leaves Spurs five points behind Premier League leaders Manchester City and Liverpool, who play their game in hand against Manchester United at Old Trafford on Sunday afternoon.

Burnley, meanwhile, are temporarily up to 13th with their victory.


popular
The SportsJOE 12 o'clock quiz | Day 136
The diet of a modern day rugby player compared with a top jockey
The daily diet of Manchester United midfielder Jesse Lingard
James Ryan's misfortune opens Leinster and Ireland doors for Ryan Baird
COMPETITION: Answer this survey for a chance to win a fabulous stay at the Trident Hotel in Kinsale
"It's not about winning at underage. It's about building players and building people"
Jadon Sancho to earn eye-watering salary at Manchester United
You may also like
1 year ago
Jon Walters was one of the most likable Irish internationals we've had
1 year ago
Jonathan Walters announces retirement from professional football
1 year ago
Peter Crouch eyed-up in swap deal to bring him back to the Premier League
1 year ago
Goals on Sunday panel outraged that Jeff Hendrick wasn't given Burnley's equaliser
1 year ago
Watch VAR overrule Burnley penalty just as Vydra runs up to the ball
1 year ago
Robbie Brady receives late red card in return from injury
Next Page