The Irish football team: Do we expect too much, too little or just enough?

It was Big Mick Energy. It was a chance to see Matt Doherty. A chance for Sean Maguire to lead the line. A chance for Conor Hourihane to show that he could replicate his performances for Aston Villa in an Ireland jersey.

A chance for David McGoldrick. A chance for Jack Byrne. A chance for Jeff Hendrick, Robbie Brady and all of them to finally shake the stink that lingered around the Irish national football team ever since that faithful night were they were smashed, beaten and hit over the head by Christian Eriksen and Denmark.

And it was a disaster. An ugly, windy, rock facing, all too familiar disaster.

This was Ireland's chance to show that they could be something different under Mick McCarthy and they scraped by Gibraltar thanks to a second-half goal from Hendrick in a game where McCarthy hailed goalkeeper Darren Randolph as the best player on the pitch.

For some context, Gibraltar are the 194th ranked team in world football, just behind American Samoa, Guam and Bangladesh and just ahead of Brunei Darussalem, Timor Leste and Samoa. For the record, American Samoa still hold the record for the biggest defeat in international football history when they lost 31-0 to Australia in 2001.

Also for the record, they're ranked ahead of Gibraltar.

A team, that even Ireland, could experiment against. Could be expressive against. Could actually score against. A team that scored twice and conceded 56 times when they finished bottom of Ireland's Euro 2016 qualifying group.

Adam Sandler had an example for teams like Gibraltar in his 2005 movie The Longest Yard when his character Paul Crewe was asked about the prison's football team by Warden Hazen.

Crewe: You need a tune up game!

END_OF_DOCUMENT_TOKEN_TO_BE_REPLACED

Hazen: A tune up game?

Crewe: Yeah in college we started every season against Appalachian State or some slack Division 2 team. Kick the living shit out of them. Get your confidence up.

Gibraltar are UEFA's Appalachian State but for Ireland, a team that had won just one game from 11 entering the McCarthy reign and had scored just one goal from their last five games under O'Neill, they were a worthy foe, a team that limited the Boys in Green to just four shots on target.

The Irish Rugby team were largely harangued by the public for repeatedly harping on about an open roof after their spectacular capitulation against Wales in the Six Nations earlier this month and yet here's the manager of the Ireland squad and his players after they had just four shots on target against a team that has conceded on average 5.15 goals per game during their last two qualification campaigns.

Shane Duffy: "Obviously [it was] a difficult game and difficult circumstances," he told RTE. "It was a tough night out there and they made it difficult for us, we get there in the end but there’s a lot to improve on."

Seamus Coleman: "We would have liked to have won by a couple more, and I think if we scored in the first-half we possibly could have, but they made it difficult for us, and the conditions were tough, but it's the same for both teams and three points is all that matters."

Mick McCarthy:  "I pretty much hated every minute of that. I knew what it would be like. We were never going to complain about the pitch. The wind was blowing a gale. We didn't play particularly well. We had chance, one or two in the first half. Darren Randolph was probably man of the match. 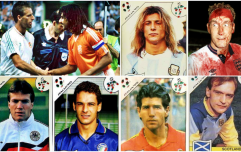 END_OF_DOCUMENT_TOKEN_TO_BE_REPLACED

"I was asked earlier on about gaining momentum and I can only gain momentum by winning games. I would have taken 1-0. I wanted to score more and play better but we have three points."

If you're debating the two it tells you everything you need to know about the state of Irish football at present. I mean after all, this is a team that won away against Bosnia in the fog. They can't do it on a windy day in Gibraltar?

And it's interesting because international football has shown us that you don't actually have to have good players to have a good team.

There's one train of thought that suggests that this is an Irish team made up largely of championship players and managed by a manager with largely championship experience, so why expect Premier League quality, the likes that the Keane's, the Duff's, the Dunne's and the Given's regularly provided to Irish teams of years past.

Given that Ireland still have a selection of Premier League players in Seamus Coleman, Shane Duffy, Matt Doherty, Robbie Brady and Jeff Hendrick, and a great complement of Championship players to form the spine of the team, there should be great scope and pieces to work with, even if it's not the same as previous decades, there's enough there and maybe that's all you need in international football.

Doherty and others have already mentioned that McCarthy has made his ideas clear to the players, and while he will not be judged on one game away, even if it is Appalachian State, there will be pressure on him to get things right but is that fair?

The players crumbled with a blank slate against a team that has done nothing but leak goals. Richard Dunne noted in punditry that this was a chance for players to express themselves and they conjured up only four shots on target.

There's reason to think Ireland should do a lot better with the players they have.

There's reason to think this is exactly how they should perform given their last 11 games together.

What they do with it is almost anyone's guess, and although things may have changed somewhat, they're still very much the same.


popular
Can you name every English football club that begins with 'W'?
James Haskell on text exchange with Peter O'Mahony after Ireland's victory over Scotland
The SportsJOE 12 o'clock quiz | Day 105
The SportsJOE 12 o'clock quiz | Day 103
Ronan O'Gara shares class Johnny Sexton story ahead of World Rugby awards
"Shane was just gifted. He could play centre back, centre forward, he had everything"
Fines and suspensions in Tipperary after stewards enquiry
You may also like
16 hours ago
Peter O'Mahony on the Paul O'Connell conversations that shaped his captaincy
19 hours ago
"He just walked out the door without saying goodbye or anything. It was just so Axel. It was so perfect."
3 days ago
"The academy boys have turned into small monsters over the past few weeks" - Peter O'Mahony
3 days ago
Baz & Andrew's House of Rugby - Keith Earls joins us for Season Two finalé
6 days ago
"Having one of the best in the world to emulate has been really good"
1 week ago
"I'm so proud of the opportunities Ireland gave me and of the woman I am today" - Linda Djougang
Next Page