Since the 4-1 defeat to Wales on Thursday night, there has been a lot of soul searching for Irish football.

This is the case any time the Republic of Ireland team suffers a disappointing result. Within a couple of sentences, it's possible to go from lamenting the limitations of a certain player to despairing over the failure to produce the next generation of players.

What begins as a discussion about the micro issues can soon morph into a conversation about the macro problems affecting the sport in the country. It's easy to see why this happens. The problems afflicting Irish football are so deeply embedded that the micro and the macro bleed into one another. However, it is also important to try to separate the two, particularly in light of Thursday's result.

"The Ireland players desperately need some basic organisation and a tactical plan to make them greater than the sum of their parts.

"Instead, they have their manager telling them to "just deal with it" as they're left exposed and overrun again" https://t.co/L8NXUeyseH

END_OF_DOCUMENT_TOKEN_TO_BE_REPLACED

Yes, the current squad is possibly the weakest available in recent memory and depleted further by injuries to players. But it's the job of the manager and his coaching staff to make the players at his disposal greater than the sum of their parts. That is the primary task of a coach, regardless of the wider issues.

Against a talented, aggressive and motivated Wales team, Ireland were significantly less than the sum of their parts. Martin O'Neill mourned the absence of players, and understandably so. But he didn't make the most of the players he had to select from.

Shay Given once said that the former Celtic manager didn't work on team shape or how to counteract the opposition in training. It looked like that against Denmark last November and against Wales last week.

Did something on why Ireland need to move on from MON and Keane, two men happily stuck in the past - https://t.co/OM5GUHfWJi

Playing a 4-4-2 formation away to a team such as Wales - with forwards that interchange positions and three creative midfielders - left Ireland exposed. O'Neill had used a back-three with wing-backs in friendlies earlier this year. But, in the team's first competitive game since last November, that experiment was ditched, despite the presence of two wing-backs in the squad - Seamus Coleman and Matt Doherty.

END_OF_DOCUMENT_TOKEN_TO_BE_REPLACED

Ireland desperately needed a third midfielder to try to break Wales' grip on the game and to protect the back four. Yet David Meyler, who has performed this role in the past, sat on the bench.

Meyler has gone from stand-in captain a year ago to the back of the midfield pecking order. 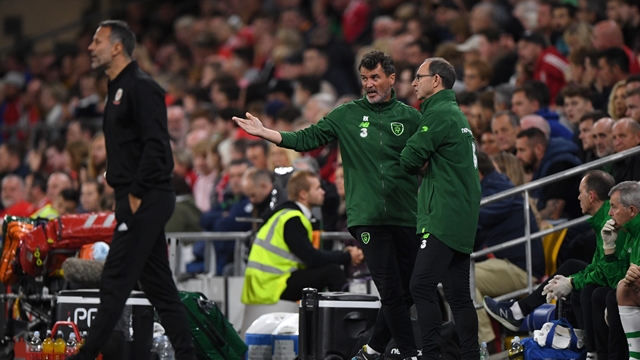 Just look at the gap between Ireland's midfield for Wales' first goal.

There is an ocean of space between Conor Hourihane and Jeff Hendrick, and Ciaran Clark and Stephen Ward behind them. Joe Allen is about to expose it with a pass into Tom Lawrence, who then opened the scoring.

This is where Meyler could have been if he was on the pitch. 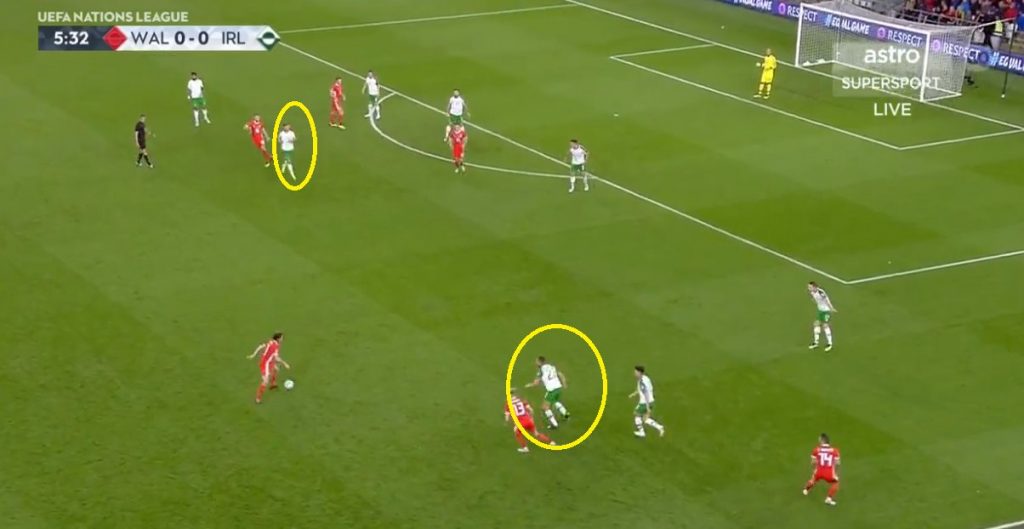 It's still possible to play a 4-4-2 formation and be competitive. However, the team needs to be compact. There can't be large gaps between the defence, the midfield and the forwards. Ireland were a rabble against Wales. There was space everywhere you looked and it was easy for the home side.

To achieve this compactness and understanding between the players, the manager and his coaching staff need to work on it in training, regardless of how little time they have. Michael O'Neill has created a superior side with Northern Ireland with significantly fewer resources. Somehow, he has also achieved this without winning the European Cup four decades ago or having any Brian Clough anecdotes.

Ireland appear to play off the cuff. They look muddled and unsure of what they're supposed to be doing. A lack of collective cohesion leads to individual errors.

"It's not good enough for the manager to say, 'Brian Clough, he didn't do it, he just let us go out and play'. That was 40 years ago" https://t.co/RBt30efait

One of the most worrying aspects of Ireland's performance was just how passive they were without the ball. O'Neill even mentioned this following the game.

"One of the things when you don't have the ball - and we didn't have the ball greatly - is that we have to close down in a pack, not just one or two of you," the Ireland manager told The Irish Independent's Daniel McDonnell following the loss.

But even working hard on the pitch requires hard work on the training pitch. Ireland appeared confused about what they should do without the ball.

For example, in this image, Cyrus Christie is rushing forward to apply pressure on Ben Davies. But ultimately, it was a complete waste of energy. No Irish player followed him, and Davies had a simple pass into Allen. 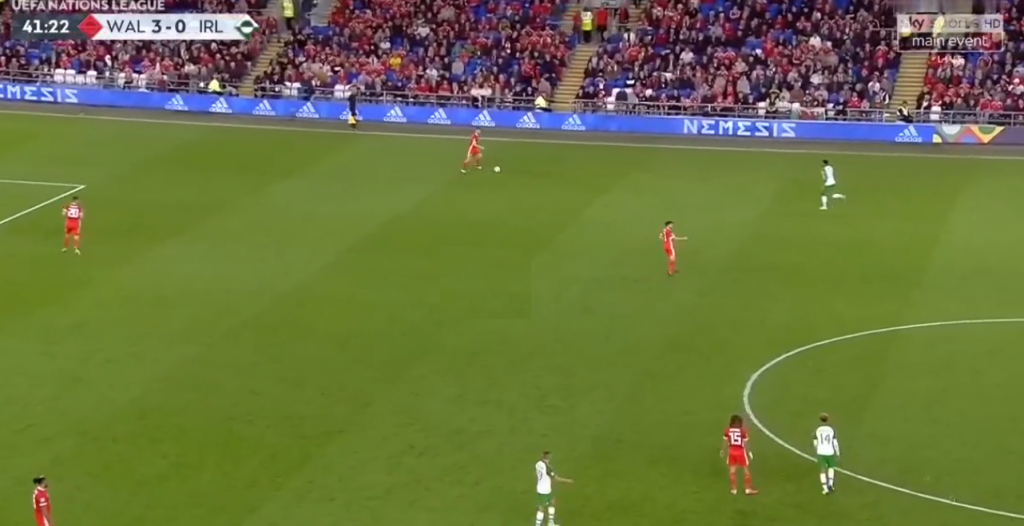 By pressing on his own, Christie has just left space for Wales to play into. 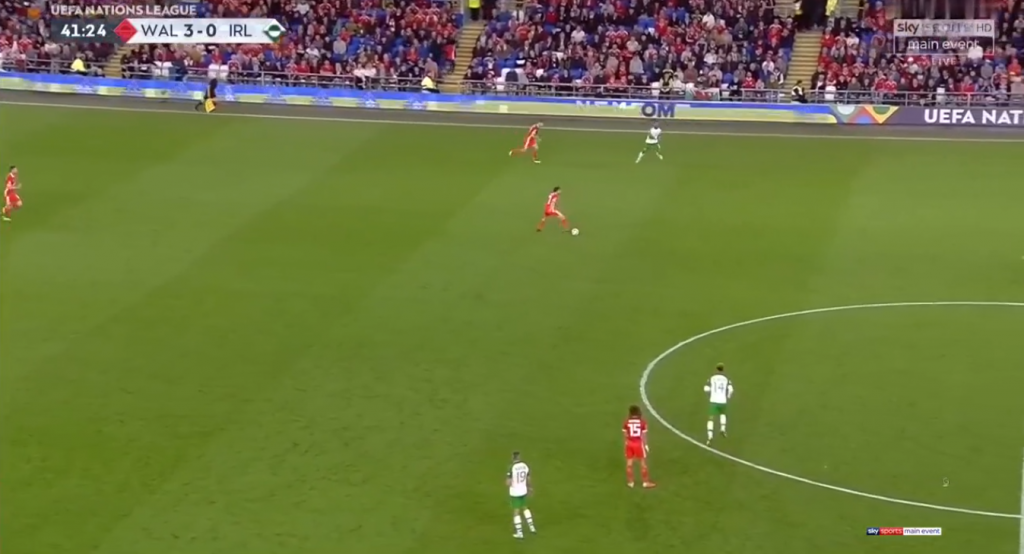 He retreated and Ireland stood off as Allen picked out a pass yet again given time and space to do so. 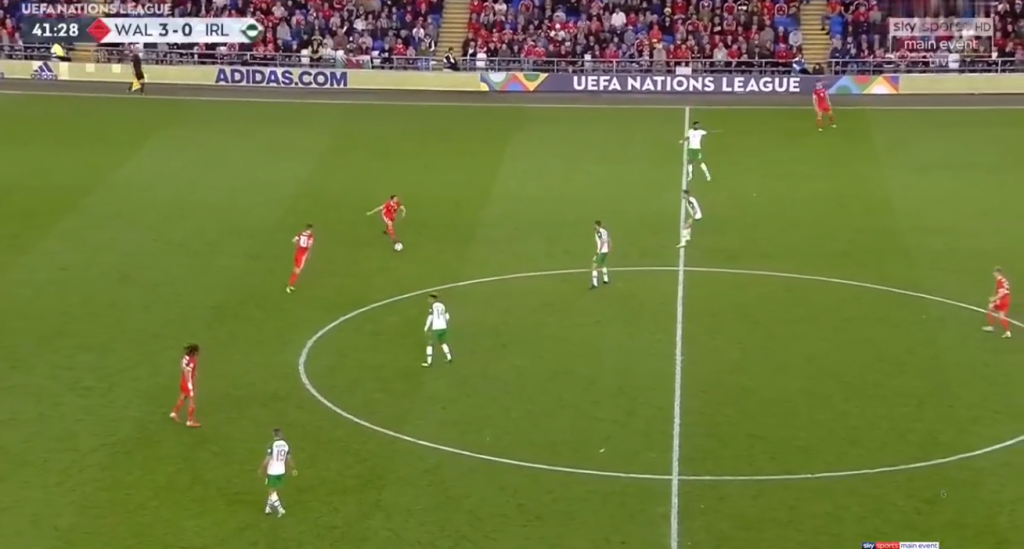 Christie's sprint forward to Davies should have been the trigger for others to follow. But it was just one player running aimlessly because it clearly had not been worked on beforehand. This occurred throughout the match. Ireland didn't know whether to press or stand-off their opponents and were repeatedly cut open by Wales.

O'Neill also rued his team's lack of quality when on the ball, saying they need to "just deal with it" and to be positive in possession.

But in both phases of play, it's not enough just to expect your players to "deal with it." It requires coaching and a clear game plan to press effectively, it's not something that can just be left to the players.

Maybe O'Neill and his coaching staff are instructing the team on how to press and what to do with the ball. Maybe the message just isn't registering with the players. Or maybe they haven't worked on it as well as they could have. Former players have attested in the past that the manager does little work on the training ground, that the team weren't told the starting lineup until an hour before kick-off and that they didn't scout their opponents.

Either way, the end result on Thursday reflected extremely poorly on the management team. 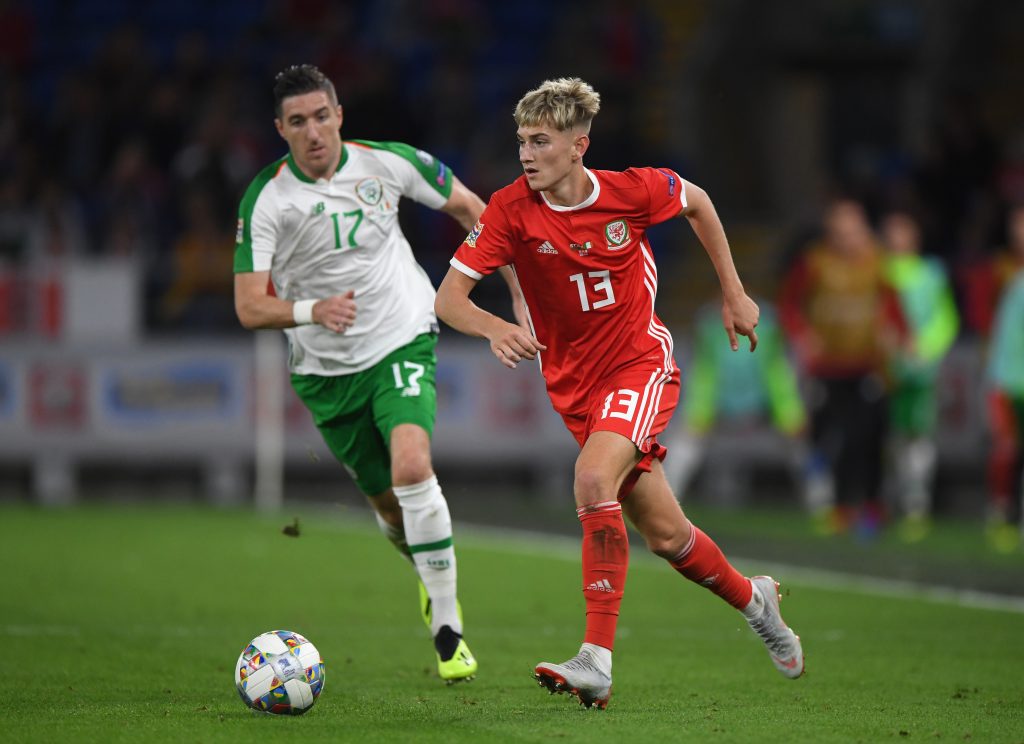 It doesn't look organised when the team are out of possession and there doesn't seem to be any discernible pattern of play when the team have the ball.

In this passage of play, Shane Duffy has the ball at his feet but very few options for a pass. Eventually, Hourihane drops back from midfield and plays an instant pass back to the central defender.

Duffy, starved of options, plays a long pass towards Christie, which the Fulham full-back fails to control and Wales win the ball back.

The lack of options for the player in possession is precisely why Ireland repeatedly hoof the ball away. Wales knew that and pressed them high from the first whistle. O'Neill knows that and decried Ireland's poor play in the post-match press conference.

"We have to be more positive," he said.

"Be stronger on the ball, deal with it. When it comes into you, don’t start panicking, play. Try and get on the half-turn, to get ourselves going forward."

But, once again, this can only be achieved through coaching the players. Almost five years after he became manager of the national team, it should now be obvious that Ireland team simply can't just "deal with it." Yet, he seems incapable of changing his approach. 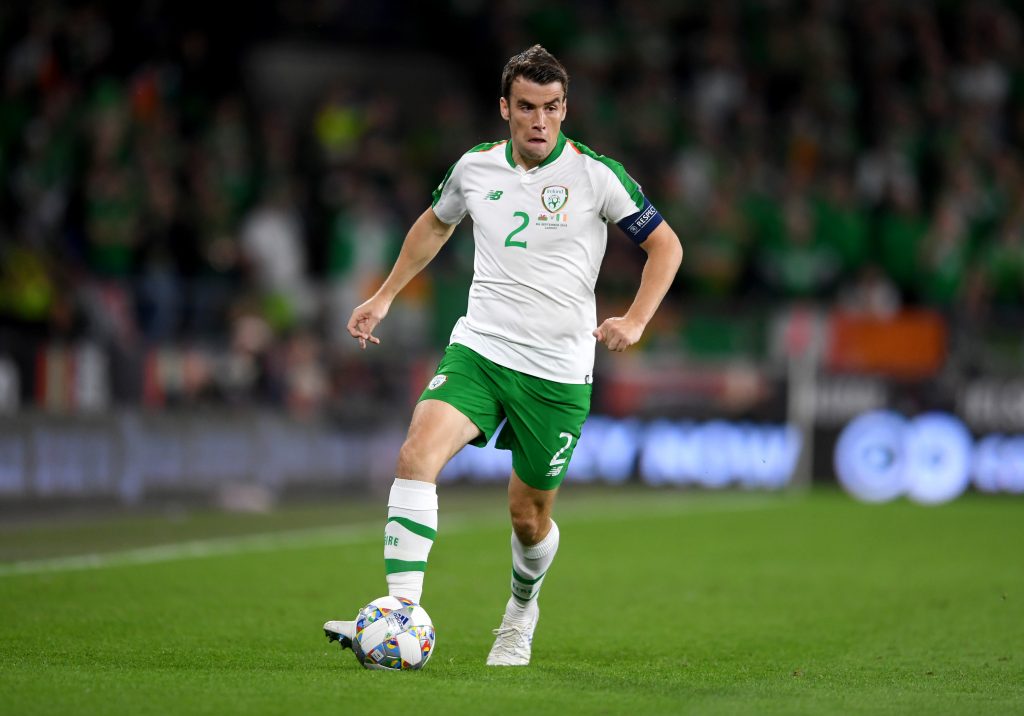 If O'Neill and Keane won't change, then they should be replaced. If you get a reputation as an early riser, you can lay in bed all day. O'Neill has had a reputation as a brilliant motivator and an intelligent person who left his law studies to become a professional footballer. Where have his famed powers of motivation gone? And was it wise to leave his midfield outnumbered and overrun away from home? He said he expected Callum Robinson to drop into midfield. Why not select a midfielder to start in midfield instead? The same midfielder he previously made captain.

The squad certainly isn't the most talented there has been. That's exactly why they need more than to be told: "just deal with it."

After the disappointing final campaign under Giovanni Trapattoni, the Ireland team needed a lift and the Derryman provided it. The basic defensive structure remained from his predecessor and O'Neill infused his team with an emotional energy that had been lacking. They beat Germany in Dublin and defeated Bosnia in the Euro 2016 play-off - the second-leg remains the team's best display under him - and reached the last-16 of the tournament in France, beating Italy along the way. 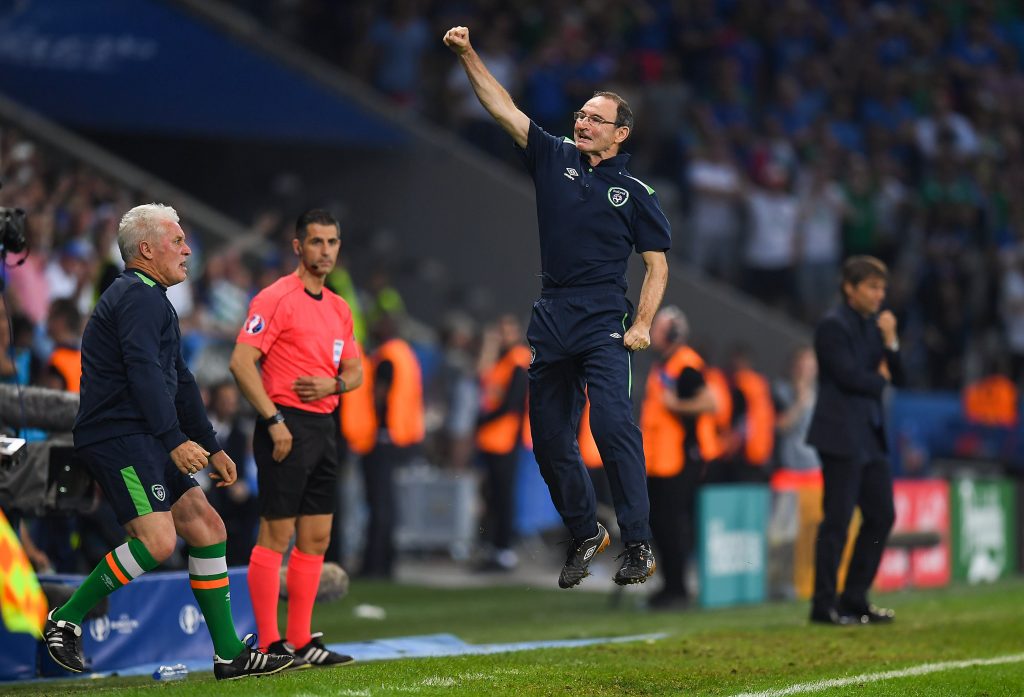 These were all great results and great nights for the players and supporters. But O'Neill's approach has run its course. The 5-1 defeat to Denmark wasn't a freak result. Ireland now look like conceding from every passage of play. The team now need what Trapattoni brought - structure, organisation and something that resembles an idea of play.

If you're contemplating arguing that Ireland simply do not have enough good players, and therefore we can't expect anything more from a manager, please, just don't bother. Ireland's lack of quality players is just another argument in favour of replacing O'Neill.

The fact that there are not top-class players available means that the team needs someone to prevent their lack of individual talent from being exposed.

With such a low success rate, the focus on exporting young players can't be considered successful

Ultimately, O'Neill's effect has worn off, just as it did with Sunderland when his tenure started well, dipped in the middle and crashed into nothingness. He was dismissed with the team winless in eight games. O'Neill's way may have worked in the past but maybe it belongs in the past.

There are many problems within Irish football that won't be solved by simply replacing the manager. But that shouldn't distract from the problems that directly stem from the current management team. The focus on the macro issues will become sharper when the inevitable happens, and there certainly are enough of them too.