Fair play to Edison Cavani for telling PSG where to go

It sounds like a complete mess behind the scenes at Paris Saint-Germain.

Last week, Neymar and Edinson Cavani were involved in two separate on-field disputes during PSG's win over Lyon. As Cavani was preparing to take a penalty, his new Brazilian teammate argued with him, before shaking his head and walking away when he didn't get his way to take the penalty.

Cavani missed the subsequent spot-kick, but he has been PSG's designated penalty-taker since Zlatan Ibrahimovic left in 2016, so he was well within his rights to tell Neymar where to go.

Neymar also embarrassed himself earlier in the game.

The world's most expensive player recruited Dani Alves for this attempt to foil Cavani. The Uruguayan wanted to take a free-kick, but Alves wouldn't let him, guarding the ball before handing it over to Neymar.

Cavani looked and hurt by the actions of his teammates, and the incident seemed pre-arranged between the Brazilian pair. It was embarrassing.

See what Dani Alves did today, fighting to take the ball from Cavani to Neymar, very soon Cavani may loose his position in the PSG team pic.twitter.com/L28oPhWmcd

The situation didn't get much better following the match. According to L'Equipe, the pair continued their argument in the dressing room, and had to separated before they fought. Neymar allegedly unfollowed Cavani on Instagram and demanded that the Qatari-owned club sell his teammate at the first available opportunity. 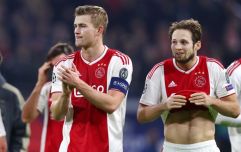 END_OF_DOCUMENT_TOKEN_TO_BE_REPLACED

A new report suggests that the situation has deteriorated further. According to Spanish journalist Diego Torres, there is a very serious rift in the dressing room, caused by Neymar's arrival and attitude, and Cavani has rejected €1m from the club's Qatari owners to allow Neymar to take penalties. Torres is the author of The Special One: The Secret World of Jose Mourinho, a book detailing Jose Mourinho's time as Real Madrid manager.

This just isn't going away, is it? https://t.co/WNrZGaQ6WD

The Spanish journalist had several sources at Madrid, and seemingly has a line to the PSG dressing room. He writes in El Pais newspaper that:

PSG might need to do more than sell Cavani to resolve this situation and keep Neymar happy.

Neymar may be a brilliant footballer who makes £600,000 a week, but he has to hang around with Lewis Hamilton and is disliked by about 70 percent of his colleagues, so it's not all rosey for the Brazilian.

popular
The SportsJOE 12 o'clock quiz | Day 146
After a bonkers final frame, a shaken Kyren Wilson makes it to the world final
Leinster star Hugo Keenan has beaten Beauden Barrett's 'Bronco' time
"No doubt he'll say he played shit like he normally does, but I thought it was a good game."
The SportsJOE 12 o'clock quiz | Day 145
QUIZ: Beat the clock to name the Premier League assist kings
300/1 winner makes history at Leopardstown
You may also like
1 year ago
David De Gea could leave Man Utd for Paris Saint-Germain
1 year ago
PSG's Qatari owners reportedly holding talks with Leeds United over takeover
1 year ago
Neymar receives three match ban for hitting fan after PSG cup final defeat
1 year ago
Neymar facing lengthy ban after striking fan after PSG defeat
1 year ago
Neymar accused of punching Rennes fan after cup final defeat
1 year ago
Ander Herrera turned down offer from Manchester United to almost double his wages
Next Page