The Russian oligarchs have had better weeks.

Russia’s super rich have lost an absolute fortune recently thanks to the oil price crash. The oligarchs are down more than $11 billion (€10 billion) in the space 10 trading days as the price oil has fallen to below $30 (€27.50) a barrel, according to the Telegraph.

Roman Abramovich, who made his billions from the sale of oil behemoth Sibneft and now owns Chelsea football club, is reportedly down $820m (€751m). 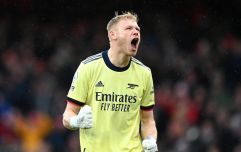 Why Aaron Ramsdale wore Arsenal away jersey against Newcastle

END_OF_DOCUMENT_TOKEN_TO_BE_REPLACED

Arsenal's second biggest shareholder, steel tycoon Alisher Usmanov, is also thought to have lost $910m (€834m) since the start of the year.

However, don't expect to see either pawning their yachts in order to pay for a lunch from Dealz. These guys still have a hell of a lot of money to play with.

It is estimated that Abramovich is still sitting on a whopping $6 billion in savings while Usmanov came in at 71st position in the 2015 Forbes rich list with a personal value of $14.4 billion.