A journey through Brendan Rodgers' greatest ever quotes

The Messiah returns to English football

Brendan Rodgers has become Leicester City's new manager and they can look forward to many memorable quotes from the Northern Irish tactical genius. Here's some of his best yet.

“The problem with being a manager is it’s like trying to build an aircraft while it is flying.”

END_OF_DOCUMENT_TOKEN_TO_BE_REPLACED

We'll start here because this quote gives off the vivid image of Brendan Rodgers frantically building his squad like the train chase scene in Wallace and Gromit: The Wrong Trousers. It would explain how Jose Enrique got in there.

"When you’ve got the ball 65-70 percent of the time, it’s a football death for the other team. We’re not at that stage yet, but that’s what we will get to. It’s death by football. You just suck the life out of them."

You know, for all the impressions of football's flowing, beautiful nature that he gives off, there is something delightfully brutalistic about Brendan Rodgers. Death by football. Just soak that up for a minute. Whatever it actually entails, I presume it involves Roy Keane.

"I always say a squad is like a good meal. I'm not a great cook, but a good meal takes a wee bit of time. But also, to offer a good meal, you need good ingredients."

Can we please get Rodgers on Come Dine With Me? There's always one inexplicably wealthy white dude who reckons he's a modern day Descartes because he own's Stockport's third biggest carpet warehouse. He is always flabbergasted when he doesn't win.

Enjoy the trophy. I hope it makes you very happy. Dear lord, what a sad little life Manuel.

END_OF_DOCUMENT_TOKEN_TO_BE_REPLACED

“It is great for the public here at Sunderland to see us. They must have been wondering what this team everyone is talking about are all about and now they have seen. We were wonderful."

Brendan Rodgers: The original footballing missionary. Let's just remember for a second that this quote came when his Swansealona team had just lost 2-0 to Sunderland, where Rodgers was presumably surprised to find running water.

“I believe a young player will run through a barbed wire fence for you. An older player looks for a hole in the fence.”

This pseudo intellectual mixing of metaphors is classic David Brent. It leaves so many questions. Do barbed wire fences have holes in them? Wouldn't jumping over the barbed wire be more courageous? Why doesn't Rodgers write for JOE? 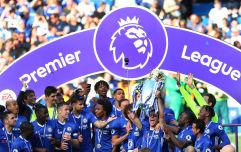 END_OF_DOCUMENT_TOKEN_TO_BE_REPLACED

"I think there’s three players who will let us down this year — the cause, the fight, everything – and I have written them down already in these three envelopes. Make sure you are not in one of the envelopes."

How can a player make sure he's not in the envelopes if its already written down? Will Brendan quickly change the envelopes on a weekly basis? Spoiler alert: the three names inside the envelopes were Glen Johnson, Theresa May, and Gunnersaurus.

"I’ve always said that you can live without water for many days, but you can’t live for a second without hope."

According to a study published in German research journal Archiv Fur Kriminologie, "it seems possible to survive without food and drink within a time span of 8 to 21 days", which I guess kind of proves Rodgers point. Fair play. 1-0 Brendan.

"I use a quote with the players,'Per aspera ad astra', which is Latin for ‘through adversity to the stars’."

Nobody who speaks Latin can be stupid.


popular
Spicy Donegal semi-final the highlight of a rip-roaring weekend of GAA on the tv
Shane Walsh: 'That's not how I was coached to play football. No one was coached to play football that way'
"Ah, come on!" - Richie Sadlier and Didi Hamann couldn't even agree to disagree on Griezmann's red
Seven exciting Ireland prospects pushing for November squad inclusion
Derry club win county final factfile games with extravagant set of jobs
"Where Johnny Sexton is so important to us now is being able to pass the baton"
Luiz Felipe in tears after bizarre red card after full-time whistle
You may also like
4 days ago
Steve Bruce hits back at journalist during press conference after question about his future
1 week ago
Premier League yet to reveal assurances they received over Newcastle United ownership
1 week ago
Newcastle takeover by Saudi sovereign fund could go through today
2 weeks ago
QUIZ: Can you name these 50 Premier League players from the 2010s?
2 weeks ago
Furious Cristiano Ronaldo storms off pitch after Man United held at home
2 weeks ago
The SportsJOE Quiz - Liverpool v Man City special
Next Page