Alex McLeish's players definitely won't be using ice to cool down during their stay in Mexico.

Scotland fell to a 1-0 defeat to Mexico on Saturday night, with Giovani dos Santos scoring the game's only goal in the searing heat of the Estadio Azteca.

Temperatures reached highs of 28° that afternoon but the visitors will have been discouraged from putting ice in their drinks because McLeish knows only too well the dangers that come with unfamiliar tap water.

The last time McLeish was on Scotland duty in Mexico, a decision to chill a glass of Coca-Cola with ice cubes resulted in a five-month rift with then-manager Sir Alex Ferguson.

At the 1986 World Cup, McLeish decided to have treat himself to some Coca-Cola after defeat to Denmark in their group opener but then quickly fell ill.

"I played in the first game against Denmark and then took ill after drinking some ice in my Coca-Cola," McLeish told the Daily Record.

"Alex Ferguson did a fitness test for the Germany game and I had some breathlessness. It was on the morning of the game and I was absolutely gasping and I said, ‘No boss, there’s no way I can play tonight’.

"My legs were heavy," McLeish continued. "I’d been sick the night before and I just couldn’t get from cone to cone in the fitness test in a time that would render me fit to play the game.

"I really was floored. I watched the match in my bed that night. I jumped out of it when Gordon Strachan scored the opener only for the Germans to go on and dismantle us. The Coca-Cola was the culprit. Maybe it was from their tap water to make the ice.

"Their bellies are used to it, ours aren’t. We have obviously told the players here to avoid ice.

"Fergie didn’t select me for the Uruguay game when I was fit again. He said he didn’t think Davie Narey had done anything wrong against the Germans which I wasn’t too chuffed with.

"I fell out with the boss and on the way back home I kinda gave him the cold shoulder – five months later he left for Manchester United anyway." 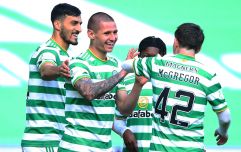 END_OF_DOCUMENT_TOKEN_TO_BE_REPLACED

McLeish says he put his own uneasy experience up as a cautionary tale for the current Scotland squad.

"I actually told the team in meeting the other day, ‘Look, the performance guys have told you what to expect and I can give you actual evidence of what happened to me. Just be careful’."

popular
How The Mountain lost 36kg ahead of boxing fight with The Beast
Sam Bennett's green jersey masterclass got Lance Armstrong talking
Irish cyclist Sam Bennett delivers classic putdown to British cycling magazine
"He's found a way to do it. Whether that's good or bad for the game, I don't know"
The SportsJOE 12 o'clock quiz | Sam Bennett special (Day 184)
Les Ferdinand explains why QPR didn't take the knee
QUIZ: Can you name every player to score four goals in a Premier League game?
You may also like
1 month ago
QUIZ: Name every 2019/20 Premier League goalscorer from Scotland
4 months ago
"I almost feel more comfortable out there" - Finn Russell on playmaking, perceptions and fresh starts
6 months ago
Scotland deliver knock-out blow to French Grand Slam
7 months ago
Bundee Aki set for new midfield partner against Wales
7 months ago
Farrell demands 'true Irish grit', O'Mahony delivers in bloody style
7 months ago
The Scots had plenty to say about CJ Stander’s final turnover
Next Page