One of those goals that never gets old

Five hundred, maybe a thousand? That is a rough guess as to how many times I've seen this goal. And yet it always thrills. Always.

That some still think it was a fluke is one of life's great mysteries, up there with watching the Late Late Show by choice. If it had been scored by virtually any other player you might be able to make that case but when it came to Dennis Bergkamp, you just know he performed the myriad of calculations to conjure up this goal in that magnificent football brain of his. 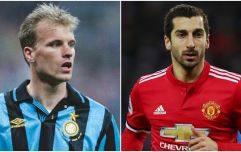 END_OF_DOCUMENT_TOKEN_TO_BE_REPLACED

The pass from Pires is fizzed at the Dutchman's feet and he has fractions of a second to decide what to do. Anyone else would have controlled it with their back to goal and then worked out how to beat Nikos Dabizas or have a quick shot on goal.

But Bergkamp decided that he could control it and beat his man in one, and he executed it perfectly with a simply exquisite left-foot dab that spun the ball one side of the Greek defender while the striker spins the other side at the same time.

In fairness to Dabizas, he cops what is happening pretty quickly and makes a game attempt to poke the ball away. But then Bergkamp demonstrates two more of his skills; strength and coolness under pressure.

He fends off the burly centre half with a very strong left arm and at the same time he sizes up Shay Given and slides the ball perfectly past him with his left foot. From the time he recieves it to the ball hitting the net is just over three seconds but the full smorgasbord of the Dutchman's enormous talents are on show in that tiny amount of time. 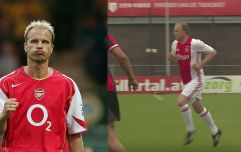 END_OF_DOCUMENT_TOKEN_TO_BE_REPLACED

I rate it ahead of Bergkamp's other infamous goal, the juggling effort against Leicester, simply because of the mental gymnastics required to even think of attempting the move he pulls on Dabizas.

In the Premier League 20th anniversary awards, Wayne Rooney's overhead volley goal against Manchester City won the public vote for the best of the Premier League era up to 2012, with this Bergkamp goal in second but for me nothing has yet surpassed the Arsenal man's effort.

Rooney's was in a bigger game, and others like Tony Yeboah, Matt Le Tissier, Paolo Di Canio, Luis Suarez and Thierry Henry all scored truly stunning goals in their own way but for me nothing is as perfect as Bergkamp's.

Recall the fuss when Lee Tomlin pulled off a less dramatic version of the move on Vincent Kompany in the FA Cup. The Middlesbrough man didn't even score and the internet went bananas. Imagine if Bergkamp scored that goal today?

For vision, for guile and for simple perfection from start to finish, it may never be bettered. Until it does, I'll just keep watching it.