If the world was just, Michael Conlan would have two Olympic medals.

Unfortunately, life isn't fair and Michael Conlan was robbed of a second Olympic medal at the 2016 Games.

Despite beating Vladimir Nikitin in the quarter-finals to the point where he was unable to continue in the competition, the judges gave the Russian the unanimous decision victory and Conlan was understandably furious.

After the decision came in, the Belfast man gave the judges the one-fingered salute before giving that iconic expletive-laden interview with RTE.

END_OF_DOCUMENT_TOKEN_TO_BE_REPLACED

It was a dark day in Irish sport, the lowest point of Conlan's amateur career but still, he has managed to make a positive out of a bleak situation.

That controversy gave him a forceful push into the professional circuit, where he has impressed with his performances that has justified him being one of the most promoted rising stars in the game.

END_OF_DOCUMENT_TOKEN_TO_BE_REPLACED

That scene of him standing in the centre of the ring, arms outstretched, flipping the bird really struck a chord with fans too. It has reached the point now where when people come looking for photographs, Conlan is more than content to oblige and give them the pose they want. 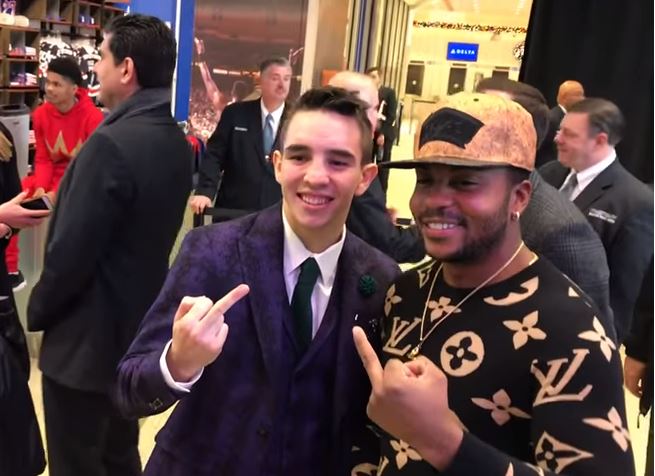 When he's asked about why he's so willing to give camera phones the finger for the sake of a social media post, Conlan admits he doesn't really care about the significance of it or it's literal meaning. He doesn't want to deny his fans what they want, and they really do want it.

When Conor McGregor ensured that TJ Dillashaw would forever be known as the 'snake in the grass,' the UFC bantamweight champion adopted it as his moniker and as his logo. He turned what was originally a nasty situation on its head and started owning it.

Conlan's doing that too, as you can see from the new line of hats that will be available in the new year.

My hats are now available for “PRE ORDER” anyone who pre orders now, will have hats sent out around Jan 7th. I’ve teamed up with @chubbyco_ on this, here is the link https://t.co/E0CPdqBrpX #TeamConlan #TheConlanRevolution pic.twitter.com/VxuzI6gWdc


popular
Shay Given on how far Ireland could've gone at the 2002 World Cup with Roy Keane in the team
The SportsJOE Friday Pub quiz: Week 3
From Ireland to Argentina: Alexis Mac Allister's Irish roots explained
Ivan Rakitic criticised for alleged comments condemning 'gays, black people, dwarves and the obese'
The World Cup 2022 team of the tournament so far
Jack Grealish says he regrets his comments about Miguel Almiron
France demand FIFA change result of World Cup defeat over 'rule break'
You may also like
3 years ago
Military coups, AK47s and gold medals - the remarkable story of how Ben Ryan guided Fiji to Olympic Sevens glory
5 years ago
Ireland loses Olympic sailor Saskia Tidey to Team GB ahead of Tokyo 2020
5 years ago
It seems there was just one problem with O'Donovan brothers' appearance on Graham Norton
5 years ago
WATCH: O'Donovan brothers had a Hollywood actress entranced on The Graham Norton Show
5 years ago
WATCH: Ireland's bittersweet sporting year summed up perfectly by top betting surprises
5 years ago
Michael Conlan makes it clear to AIBA how much he is willing to pay them
Next Page