For what seems like aeons, the notion that Floyd Mayweather would be jealous of any other athlete was ridiculous. Let alone, a boxer.

Mayweather changed the game. He made himself his own boss, claimed multiple world titles, earned over a billion dollars, became the biggest PPV draw in sports history and rode off into the sunset with his perfect record intact by beating one of the most popular combat sports stars on planet Earth.

He solidified his legacy as one of the all-time greats with a uniquely-evasive style and an unrivalled promotional prowess that no rivals could come close to touching. However, people are already having conversations about Vasyl Lomachenko being on course to being the greatest, not just one of the greats.

Mayweather had some harsh criticism for the consensus P4P king's recent win over Guillermo Rigondeaux. As he explained to Fight Hype, he didn't see much penchant for causing damage from either fighter.

"It really was no damage done to neither side. It was a real just robotic, real stiff, robotic fight. Nobody really landed like no killer, solid shots, no real shots. You can look at me and Diego Corrales, or me and Arturo Gatti. I can't take that away from Lomachenko. He went out there and done what he had to do, but one thing he can’t do is knock (out) a guy.”

That's a bit rich coming from a man whose style was considered so 'boring' because of his unwillingness to pursue a finish. Mayweather went a decade without scoring a single knockout, except for that cheap shot against Vitor Ortiz. 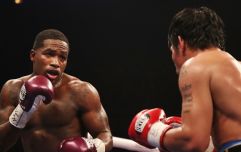 END_OF_DOCUMENT_TOKEN_TO_BE_REPLACED

Lomachenko, on the other hand, is riding four corner retirement victories in a row. Before that, he knocked out three straight opponents on the bounce. He has only gone the distance three times in his 11 professional fights.

Lomachenko was considerably larger than Rigondeaux, who moved up two weight classes to take the fight. Mayweather wasn't thrilled about that either, claiming he has never done that before.

“I never fought a guy that was that small. He was smaller than that. Honestly, they didn't look like they belonged in the ring together."

This is also pure bollocks.

Juan Manuel Marquez moved up two weight classes to fight Mayweather in 2009. Not only that, but Mayweather came in two pounds over the agreed upon weight!