It's not what you lift, it's how you lift it.

When it comes to weight training for building muscle, that is certainly the case. Sports such as powerlifting and strongman are more a test of your maximum strength, where it is about taking the heaviest possible weight from A to B.

But if you're looking to build a little more muscle, the actual load you lift becomes less important. It's more about technique.

Despite this, we may have been getting it wrong on some fronts.

You've probably been told to perform an exercise with full range of motion at all times. This was believed to be the best way of putting the entire muscle under maximum tension.

However, scientists in Japan discovered that one particular weight training trick is even better. The weirdest part?

It actually involved reducing the range of motion.

This particular technique placed under the microscope is called 'partial reps.'

What are partial reps? 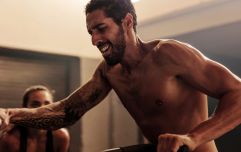 The most underrated gym exercises of all time

END_OF_DOCUMENT_TOKEN_TO_BE_REPLACED

Japanese researchers compared partial reps with full range of motion reps. They chose to focus on the tricep muscle for their study, and one particular exercise - lying barbell tricep extensions.

They split 44 men into two groups. One group performed the tricep extension with partial reps, the other group with full range of motion. The two groups followed each method for eight weeks.

After eight weeks were up, researchers found the cross-sectional area (posh word for 'size') had increased by almost 50% in those who had done partial reps.

And compared to those who did full range of motion, their results were 20% better.

All 44 men had experience of resistance training - so this may not be the best method for complete beginners. However, if you've hit a plateau in the gym, partial reps could be a new weight training trick to bring to the table.

This research shows partial reps could lead to results - and quickly.


popular
Conor McGregor bought out of Proper 12 whiskey company
"No one comes into racing for money – it is a hard way to make a living" - Elliott releases heartfelt statement
QUIZ: How well do you remember the 2010 World Cup?
Longford leaving cert schools Europe's finest with measured masterclass
"There's 30 pints of Guinness on the table! The night before a World Cup quarter final"
Ugo Monye's Lions XV features two Ireland players and Welsh captain
Mike Haley magic and Bundee's blunder sees Munster reach PRO14 Final
You may also like
1 month ago
Conor McGregor's new work-out regime and daily diet ahead of UFC return
4 months ago
Gini Wijnaldum shares his favourite gym workout for the abs
5 months ago
Josh van der Flier shares training routine and drills needed to survive at the top
6 months ago
The most overrated gym exercises of all time
1 year ago
Work-out at home this Christmas with these five easy exercises
2 years ago
Sam Underhill on post-match pasta, pull-ups and side-stepping Beauden Barrett
Next Page