When you ask to see the O'Donovan brothers' silver medals, they don't hang about.

END_OF_DOCUMENT_TOKEN_TO_BE_REPLACED

Straight in; no need to ask twice.

We could be seeing Marion Cotillard in that Annalise Murphy biopic yet.

This New Years' Eve will see the O'Donovan brothers, Gary and Paul, on our TV screens. The pair, who won a silver medal for Ireland at Rio 2016, are guests on Graham Norton's end of year special on the BBC.

A proud Cork native, Norton invited the Skibbereen brothers on to talk about their Olympic success and the media attention that has followed. Once again, they delivered some cracking stories and one-liners that had the studio audience rapt.

Hollywood star Marion Cotillard was also paying close attention to every word the brothers were saying. She initially struggled as Norton replayed clips from their Rio 2016 interviews.

"I understood 'since'," remarked the French actress.

Cotillard beheld the silver medals and told Norton she had actually touched something similar before, but in gold. Gary jumped in:

"Sure t'was the French lads that beat us!" 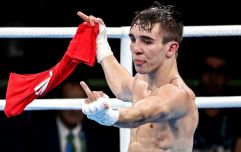 END_OF_DOCUMENT_TOKEN_TO_BE_REPLACED

As the interview progressed, the laid-back nature of the pair won everybody over.

The only time they were caught short for words was when James McEvoy asked if 'a member of your desired sex ever asked you to pull like a dog'.

The lads were stumped. We can only guess the answer.

Don't expect anything to change down in Skibb once this airs. "At home, we're the same two fellas," said Gary, "and they'd have no respect for anything down there. Silver medals or nothing. You still get charged [for drinks] down there."

Class stuff from the lads.