If you want to know how safe very fast cars are, then look this way.

Drivers at Formula Three may not quite be at the level of a Lewis Hamilton or Nico Rosberg yet, but they still fairly zip around the track.

They face the same risks as their more established counterparts and sometimes they are involved in terrible accidents that make you wonder how people get out of them at all.

However, thanks to massive improvements in safety features, two drivers are alive this afternoon despite an incredible crash.

Thanks to the @fia, @DallaraGroup, @CarlinRacing and all those who have pushed forward safety in racing. Because of them we're still here.

Ryan Tveter’s car spun and stalled during the opening race of Round 4  of the F3 European Championship at the Red Bull Ring in Austria.

However, fellow competitor Peter Li Zhi Cong was unaware his car was on the track, and ploughed into the back of him, sending him spiralling into the air. 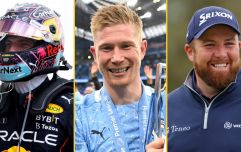 END_OF_DOCUMENT_TOKEN_TO_BE_REPLACED

Li was airlifted to hospital where it has been confirmed by his team that he broke bones in his heel, and suffered four fractured vertebrae.

Tveter was released from hospital with a bruised knee while  Pedro Piquet, who also was impacted in the incident, is also understood not to have suffered serious injury.

There was an unbelievable crash in F3 earlier today at the Red Bull Ring! pic.twitter.com/lqqO4CyXMd


popular
Frank Lampard reveals details about season-changing conversation with Seamus Coleman
'ROG isn't that sort of guy' - Brian O'Driscoll on first Ronan O'Gara encounters
Cutting through the contradictions from one of the worst television segments of the year
Aiden McGeady details the abuse he suffered after playing for Ireland instead of Scotland
Erik ten Hag orders full report on every Man United player ahead of pre-season
Pitch-side microphone picks up Eric Dier joke about Mo Salah
Mohamed Salah confirms he will remain at Liverpool next season
You may also like
5 months ago
Meath teenager Alex Dunne eyes Formula One future after encouraging season
2 years ago
"Bloody woman driver... I just didn't care, I loved racing" - Rosemary Smith
2 years ago
Everything you need to know about The Motorsport Show 2019
5 years ago
Michael Schumacher’s son is following in his footsteps
6 years ago
WATCH: Three terrifying stages of NASCAR's craziest crash of the year
3 months ago
How The Occlusion Cuff can help build strength, endurance and recovery from injuries at a faster rate
Next Page