You wouldn't have blamed Rafael Nadal if he'd wanted to make a swift departure from Wimbledon on Monday evening.

The Spaniard, a two-time champion in 2008 and 2010, had found himself two sets down to Luxembourg's Gilles Müller. Despite this, the fourth seed battled back to take the third and fourth sets. At this point, most watching the game - both on television and in the Court One crowd - would have backed Nadal to get the job done in the final set and book his spot in the quarter finals.

That, however, wasn't to be. 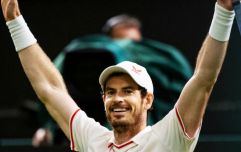 END_OF_DOCUMENT_TOKEN_TO_BE_REPLACED

Not only did he go on to lose the final set (13-15), he did so after a staggering two hours and fifteen minutes.

As he returned to his chair to pack away his racket, many would have expected a bitterly disappointed Nadal to head straight for the changing rooms. Instead, he chose to remain, waiting for Müller so that he could accompany his opponent off the court. Not only that, he even took time to sign a few autographs before eventually making an exit.

As the footage below shows, his reaction to the defeat brought a huge ovation from those that were there to see it.

A perfect example of being gracious in defeat...


popular
Gary Neville reveals Man United ignored advice to sign Joao Cancelo
"I think there are only five Kilkenny players who are guaranteed to start on any given day" - Cody's motivational methods
"County football isn't for everyone" - Down captain Barry O'Hagan hits back at criticism
Rhodri Giggs accuses Gary Neville of hypocrisy over Salford sacking
Billy Sharp breaks silence after attack from Nottingham Forest fan during pitch invasion
Erik ten Hag identifies Ajax defender Lisandro Martinez as Man United transfer target
Boris Johnson slams Jurgen Klopp for defending Liverpool fans booing national anthem
You may also like
2 years ago
You'd have to love Nick Kyrgios giving pompous Wimbledon values the middle finger
3 years ago
Bradley Wiggins has a crack at Wimbledon and 'elitist' sports
3 years ago
Kevin Anderson's comments following record-breaking Wimbledon victory are very revealing
3 years ago
Novak Djokovic has a go at Wimbledon crowd after beating British No.1 Kyle Edmund
4 years ago
What kind of arsehole steals a memento from a kid at Wimbledon?
4 years ago
VIDEO: Bernard Tomic acts like a spoiled child after losing at Wimbledon
Next Page