Late Late host Ryan Tubridy was not alone in being scared witless by the County Armagh youngster who has already been dubbed 'The Karate Kid' on Twitter. Here are some of the best reactions to the impressive display of martial arts from J.J.

Just in from training, turn on the #ToyShow to see what the craic is about, and I immediately become a fan of Jessie Jane! Absolute animal.

Jessie Jane is behind you. Don't turn around. It's too late for you now. #LateLateToyShow

Once the martial arts display was over, Jessie Jane got down to a toy demonstration of what appears to be a ghoulish hairdessers. Kids, eh? 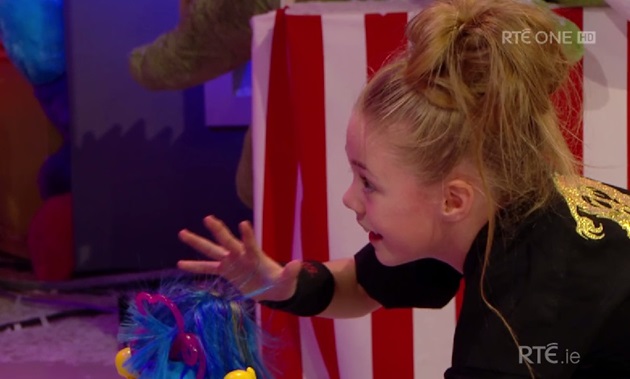 
popular
Sean Dyche set to be named Everton manager after Marcelo Bielsa talks break down
Roy Keane flatly rejects longstanding perception of ex-Man United midfielder Paul Ince
Allianz National Football League Round 1: All the action and talking points
Roy Keane leaves ITV pundits in stitches after Pep Guardiola's pre-match interview
Conor McGregor hit by car ‘at full speed’ while cycling
Study shows rugby positions you are most/least likely to be injured playing
Quiz: Identify these 15 football clubs that are not named after a place
You may also like
4 years ago
David Pocock shares class post-match dressing room picture with Conor Murray
5 years ago
Ian Madigan brilliantly shuts down Twitter user who was complaining about female referees
5 years ago
Sean O'Brien plays very funny prank on shop assistant in Kilkenny
5 years ago
Home and Away's Alf Stewart sends brilliant response to Cork City's league win
5 years ago
Sean O'Brien not impressed with Kearney brothers being referred to as 'famous farm boys'
5 years ago
WATCH: Andy Gray, bless him, got himself a bit muddled while talking about Tony Blair
Next Page