In 2016 (the 2017 tournament), he backed up the hype that was building around him when he burst the whole way through to the World Championship quarter-final.

Only Michael van Gerwen was able to stop him in his tracks but when the Derry man got motoring, you got a visible sense of self-belief. And real talent.

Limerick's Willie O'Connor was at the end of Gurney's rampage on Thursday as he averaged 99 and saw off a comeback to take his place in round three.

Daryl Gurney is putting his mark on this World Championship as he enters a commanding 2-0 lead over Willie O'Connor! 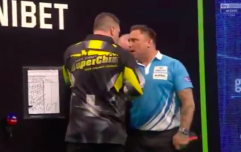 END_OF_DOCUMENT_TOKEN_TO_BE_REPLACED

Putting down O'Connor is no mean feat and Gurney's peerless opening two sets is exactly what was needed to put him within reach of the victory.

So even when O'Connor fought back to 2-2, Gurney knew it would turn.

Now he's set up to play Chris Dobey on the 27th and if he can do that, he's back in the quarters - back to the furthest he's made it in the PDC World Championship. So far.

Hear from Daryl Gurney after he secured his spot in the next round after a brilliant battle with Willie O'Connor! pic.twitter.com/B4w19OOzU0

You may also like
3 years ago
Shoe on the other foot as Cross booed but Gurney can't do it for Belfast crowd
3 years ago
When the four islanders of Ireland are throwing next
3 years ago
Derry's Daryl Gurney blasts his way to third round of World Championship
4 years ago
Daryl Gurney joy but some huge names miss out on 2018 Premier League Darts
4 years ago
Daryl Gurney's odds slashed after show-stopping checkout
3 months ago
"Or is she? Or is she" - Greg Allen's frantic commentary perfectly captures Louise Shanahan's outstanding run
Next Page