The long wait for a homegrown winner is finally over

After generations without a homegrown winner, Ash Barty wins the Australian Open, making her the first Australian to win the tournament in 44 years.

Barty, 25, took on 27th seed Danielle Collin's in the women single's final on Saturday, January 29, beating her with a hard-fought 6-3, 7-6 (2) victory at Melbourne Park. Here's the moment she did it:

The world number one and three-time Grand Slam champion already had 12 singles and 14 doubles titles to her name on the WTA Tour, having won the French and US Open's as well as last year's Wimbledon championship.

END_OF_DOCUMENT_TOKEN_TO_BE_REPLACED

However, the Australian Open has alluded her since her WTA Tour debut in 2012, not to mention every other Australian pro for nearly four and a half decades. Until now.

After a worrying wobble in the second set, Barty pulled it back to round off a highly composed performance in the historic Rod Laver Arena, the deafening noise from the home crowd spurring her on every second.

Barty was presented with the trophy by Evonne Goolagong Cawley, the last Australian woman to win the singles title on her home turf. The 11-time major winner had four Aussie Open triumphs in her stellar career. "It's pretty bloody special... This is just a dream come through for me," Barty declared, "and I'm so proud to be an Aussie!" 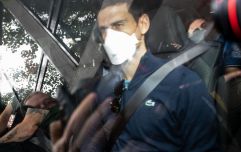 END_OF_DOCUMENT_TOKEN_TO_BE_REPLACED

She almost made it all the way back in 2020 with an impressive showing all the way up until the semi-finals, when she narrowly lost out to American Sofia Kenin.

Britain's own hopefuls may not have made it all the way this year, but we can't pretend we don't have a soft spot for the sheer talent who took our home tournament's trophy home last year, especially when you see raw emotion like this:

A fine win for Ash Barty - it's looking like another big year for the Aussie.