Alysia Montano and her story has struck a chord.

She's a champion middle-distance runner so she's always been someone to look up to. She once competed in an 800m race whilst eight months pregnant and, another time, six months after giving birth, she won a national title.

She's to be admired, respected and she's someone you could take inspiration from if you need it.

But, this week, she took to the New York Times with a powerful piece that said: "Nike told me to dream crazy, until I wanted a baby."

The 33-year-old blasted her old sponsors for not offering maternity leave whilst she was a Nike athlete. The company acknowledged in a statement that some of its sponsored athletes have had their sponsorship payments reduced because of pregnancies before confirming that it has changed its approach in 2018 so that athletes are no longer penalised, but the incident was labelled 'disgraceful' on Monday's PlayXPlay episode.

With all the work that Nike has done in terms of lobbying for social justice, in terms of equality and, indeed, in terms of telling people to chase their dreams, the Alysia Montano article raises serious questions.

"I would see this as something that Nike should've jumped on," Dublin footballer Niamh McEvoy said on PlayXPlay.

"They love to do these marketing campaigns. Why is this something that's any different? It's empowering,

"Having a baby is amazing, it's the biggest gift in the world. I'm just shocked by it." 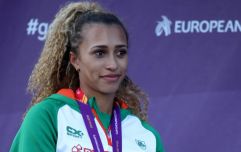 END_OF_DOCUMENT_TOKEN_TO_BE_REPLACED

Trying to think of it from a Nike perspective, host Jenny Murphy asked if it was marketable, continuing to sponsor a pregnant athlete.

The question being if it makes more business sense to hold off on that money and put it towards something else, athletes who are competing.

"Well, she came back like six months later and won. It's unbelievable," McEvoy continued.

"I play with a couple of girls who have kids and they are phenomenal athletes and I would never think like that, that it is something marketable, but it is a lovely story.

"Amy Connolly, she's a phenomenal athlete and she is the same age as me, she has a son Caoimhin and she would've sacrificed so much and so much time away from him. She played with us, with Dublin, for a couple of seasons and I think it's an amazing story.

"I don't understand why it wouldn't be marketable."

Listen to the full show here.

popular
The SportsJOE 12 o'clock quiz | Day 143
SportsJOE 2000s Football Quiz | Round 12
Brooks Koepka puts PGA Championship leaders on notice with final round comments
Rory McIlroy defends Dustin Johnson after Brooks Koepka comments
Only a Champions League fanatic would get full marks in this quiz
Collin Morikawa makes huge world rankings leap as Lowry drops back
Katie Taylor successfully defends world title, but it wasn't all smooth sailing
You may also like
9 months ago
Five key players which helped Dublin secure their historic Five-In-A Row
9 months ago
QUIZ: Can you guess the GAA jersey sponsor?
9 months ago
"You don't want to do it to sit on the bench - it can weigh you down"
9 months ago
QUIZ: How well do you remember Dublin GAA's historic 2018/19 season?
9 months ago
The five key head-to-head battles Ireland need to win against New Zealand
9 months ago
PlayXPlay | Nicole Owens interview on ACL rehab and helping the team when injured
Next Page