The AFLW is a growing phenomenon and Irish women are central to the movement.

Established in 2017, the sport took some time to find its feet against a competitive and at times confrontational backdrop in Australia, but now with interest and status growing, its trajectory is heading up. Most importantly, progress is being made in the standard of play with those who have fingers on the league's pulse suggesting that the level has never been higher than what's been seen so far in the 2021 season.

In the middle of it all are 14 Irish footballers who have hit the ground running. Last weekend you had Mayo woman Niamh Kelly leaving a trail of Aussies in her wake while Ailish Considine, Aisling Sheridan, Sinead Goldrick, Orla O'Dwyer and Aileen Gilroy also made notable contributions to their respective team's wins. 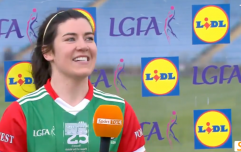 END_OF_DOCUMENT_TOKEN_TO_BE_REPLACED

In Round Two, the Irish exports were just as prominent with Sarah Rowe and Aisling Sheridan leading the charge for Collingwood. Their clash with the Geelong Cats was broadcast live on TG4 on Saturday evening and the Mayo-Cavan axis was to the fore again, Sheridan setting Rowe up for a late goal which sealed a convincing 45-16 win.

Cavan's Aisling Sheridan sets up Mayo's Sarah Rowe for a goal in Collingwood's win over the Geelong Cats 🔥pic.twitter.com/0P2T8whzrK

Elsewhere, Tipperary dual star Orla O'Dwyer put in another influential hour for the Brisbane Lions, the Cashel woman calling two marks and making 18 disposals in her team's comprehensive 65-2 win over the Gold Coast suns. At centre field, O'Dwyer has made a blistering impact for the Lions so far with some onlookers suggesting she has adapted quicker than any other imports this year.

O'Dwyer's Tipperary teammate Aisling McCarthy has also enjoyed a similarly strong start to her career, earning her side's player of the match last weekend and kicking her first goal this time around. It's two losses in a row for her West Coast Eagles' side however, with Mayo sisters Niamh and Grace Kelly eager to get a win on the board.

Aisling McCarthy kicks her first goal as an Eagle and the first of the derby! 🦅#AFLWPride | #AFLFreoEagles pic.twitter.com/D7XMbZXOR3

Sinead Goldrick meanwhile, enjoyed another win with the Melbourne Demons while Mayo's Aileen Gilroy played well in North Melbourne's 36-10 win over St Kilda. There was no such joy for Cora Staunton and the Giants, who were outplayed by Adelaide.


popular
"I trained with a guy that was born in 2004 the other day. We reckoned Earlsie could be his father!" - Peter O'Mahony
Nigel Owens on most annoying players to referee (three of them are Irish)
Six All Blacks but no Ireland players in world's top 20 list headed by Antoine Dupont
What is the story with Tyrone clubs' woeful record in the Ulster championship?
"I asked one question and lads slagged the arse off me!" - Johnny Sexton on Roy Keane chat
Longford GAA movie explores the tale so many young footballers can relate to
"I remember someone saying, 'This guy's the best of the lot of them. Just wait for him'" - Brian O'Driscoll
You may also like
1 month ago
O'Hora and Keegan hammer into each other, both of them only revelling in it
1 month ago
Sub goalie saves last-minute Diarmuid O'Connor penalty as Knockmore march on
1 month ago
James Horan hits out at "bonkers" stories and "incredible" claims after Mayo's All-Ireland loss
2 months ago
"Mayo have been back and back and back all the time. That's some resilience, to do that." - McGeary bats for Mayo
2 months ago
"Jesus, the man deserves an All-Ireland medal, but it doesn't look like he's going to get one now"
2 months ago
"There were murmurs that he didn't have it on the big days" - McCurry's redemption
Next Page