Dublin All-Ireland winner Nicole Owens expects to be back in time for next year’s TG4 Championship campaign after she claimed her third Brendan Martin Cup win.

The 26-year-old former All-Star watched on from the sidelines as Mick Bohan’s side were 2-3 to 0-4 winners in front of a record 56,114 attendance at Croke Park on Sunday.

Owens suffered a ruptured ACL in her right knee and had to have surgery after she departed injured against Cork in the All-Ireland semi-final.

The St Sylvester’s forward did most of the damage prior to Dublin’s round robin victory over Monaghan on 27 July.

“It is a crappy injury and something that is a bit more prevalent these days,” said Owens.

“It needs rehab now. The work will get done in the pre-season and I am hoping to be back on the pitch for championship next season.

“It was tough for me but the same as anyone who didn’t get on the final and would have hoped to. We have had a few bad injuries. 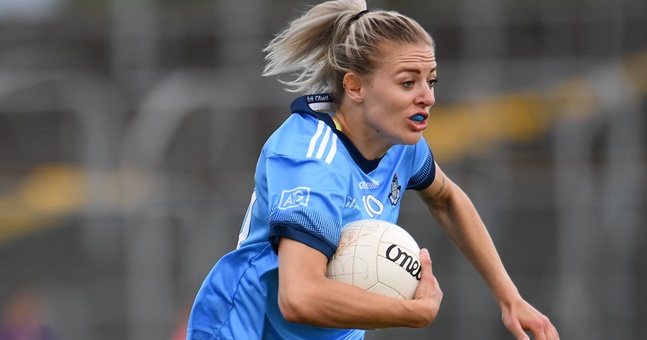 Owens, who made her Dublin debut against Cork in 2012, was thrilled to see her teammates earn their own share of history in a brilliant weekend for Dublin football.

“It is funny because I was around for the three before that we lost. At one point I didn’t think I would even get one,” said Owens.

“It has been great to see the momentum shift, and this team grow and mature. It is something I couldn’t have conceived in 2016 when we had just lost our third in a row.”

“It’s mad when you get involved in a team like this it’s an eye-opener,” said Casey, who has completed two years with the Dubs.

“When you are a player everything is done for you and you take it for granted. But you see, even as part of the management team, how much work Mick does.

“He has everything in place for the team and management team. He is so important to this group. He leaves no stone unturned in terms of his preparation.

“Mick signed up for another two years last year. He will enjoy the next few days because we have worked hard. It’s time to let the hair down, the pressure is off now. It is time to reflect on a job well done.

“You would hope we will stick together. If Mick stays around I can’t see any of us going anywhere.

“Please God we all knuckle down and are ready for next year.”


popular
Get him a tuxedo, give him the All-Star and for crying out loud, someone bring that man out to America
Southampton pay tribute as Shane Long leaves the club after eight years
Tiernan Kelly and three other players hit with ban following tunnel brawl
Fans react to Tottenham Hotspur's 'brilliant tease' for Richarlison signing
Mohamed Salah signs new long-term contract with Liverpool
The four stone-cold certainties for All-Stars even as early as this
Eamon McGee just couldn't help himself with Armagh-melee tweet
You may also like
1 month ago
Outstanding Goldrick gives Dublin the bragging rights against Meath
3 months ago
Donegal went from five down to one up in a minute of pure madness against Dublin
9 months ago
"To us, I think that was a huge insult. How we got there was definitely not through luck"
9 months ago
Emotional Mick Bohan shows grace and class in post-match interview
9 months ago
Emma Duggan lobs the Dublin keeper from 40 yards
10 months ago
Carla Rowe does the business again to finish off another stunning team goal
Next Page