Denise O'Sullivan screams for the ball.

She roars at her Ireland teammates to push forward. 'Our ball' she shouts just to keep the lines woman on her toes. The Cork woman who has found a home in Australia, is right at home here in Tallaght Stadium for the Irish womens' crucial Euro 2021 qualifier against Ukraine.

She drives forward, the lively number 10, and drags the Ireland women up along with her. Spiritually, but literally too. Because if they don't push up with her, they'll be let known about it. This is how we do it.

The enthusiasm is infectious. The kids in the crowd roar. Some of the adults do too. It's amazing what one irrepressible player can do. The Irish women have their dander up now.

All O'Sullivan wants is the ball. She sees plenty of it an inspired first half. Sometimes it comes easy, she was on it 14 times. But she makes sure it comes. Four interceptions and no fewer than five successful tackles in 45 minutes of football. Her relentless appetite for the ball and endless engine makes it all look easy. 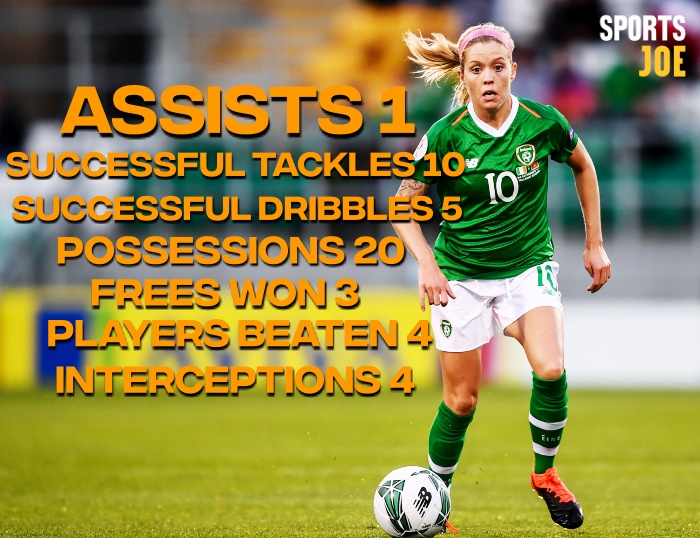 She chases down lost causes for fun. The Ukrainians will most definitely be having O'Sullivan shaped nightmares.

And those heroics from the attack-minded midfielder, were what sent Ireland on their way. 24 minutes said the clock when she demanded and received another pass in midfield.

Head up. Green grass. The Cork woman puts it on a plate for Rianna Jarrett who will run and run. Anticipation fuels the Dublin 24 air.

Denise O'Sullivan with the through ball 👌

Rianna Jarrett with the burst of pace ⚡️

And hometown hero Katie McCabe with an inspired first time finish, what a moment for her in front of her home Tallaght crowdpic.twitter.com/xbFwwHcDhm

Moments later and Katie McCabe is at it again. The hometown hero swings in a delicious corner which Riana Jarrett meets with a bang. Ireland 2-0 Ukraine and the 5328 record attendance for a women's international in Ireland, are going wild.

Maybe a bit too wild. Within two minutes the lead has been relinquished. Vera Pauw is roaring this time as two defensive errors, one from goalkeeper Maria Hourihan and one from Megan Campbell allow Ukraine back into it.

And there was plenty more to come. 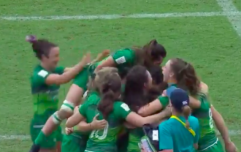 END_OF_DOCUMENT_TOKEN_TO_BE_REPLACED

By now, McCabe was growing into it even more. Her credentials well known, she's one of the best players at Arsenal. She looked a class apart in the second half where her composure in possession and enthusiasm off it had Ireland going in the right direction.

Her first touch is something special and her ability to draw defenders and to create space for her teammates is second to very few.

In front of her home Tallaght crowd, Katie McCabe was UNBELIEVABLE out there.

Her composure in possession second to none, her first touch and passing are top class.

She was a joy to watch tonight 👏🇮🇪

Others to impress included the relentless Rianna Jarrett and the speedy Keeva Keenan. It was that woman O'Sullivan who helped bundle in the own goal that would eventually prove to be the winner.

From then on it was gallant defending and lots of work-rate.

Two out of two for the girls in green. Some night in Tallaght stadium.


popular
Eric Dier calls Dele Alli on his tantrum in All Or Nothing changing room row
The SportsJOE 12 o'clock quiz | Day 181
Sean Kelly sums up emotion of a nation as Sam Bennett all but sews up the green jersey
"I've always said I'll go back and play. I'll 100% play with Portlaoise again, and I really want to play for Laois"
The Tipp minors who beat Dublin's golden generation: the ones that got away
QUIZ: Can you name the 5 Man United players in 15 seconds?
Anthony Stokes has Livingston contract terminated after Astro Turf struggles

You may also like
4 months ago
"Having to find a job was the next thing" - Leah Lyons sorts Tesco switch during pandemic
5 months ago
"It maybe feels like we don’t deserve all of this... It hasn’t hit the surge yet" - Dr Claire McLaughlin
7 months ago
"Nothing we could do was going to bring him back" - Eimear Considine on coping with loss and finding support
7 months ago
IRFU apologise to Wales over shower fiasco
7 months ago
Storm Beibhinn blows Wales away
7 months ago
"We probably don't realise how fast women's rugby is growing here" - Sene Naoupu
Next Page