McSharry's brilliant interview is what the Olympic dream is all about

Mona McSharry is just 20 years old, she's competing in her first Olympic games but that didn't stop her beating some of the best in the world to make it through to the final of the women's 100m breaststroke.

Two brilliant performances, first in her heat and then in her semi-final, have seen the Sligo youngster become the first Irish female swimmer in more than a quarter of a century to reach an Olympic final. That final will take place in the early hours of Tuesday morning, when the whole of Sligo will be watching on as McSharry lines up in lane eight in the biggest race of her life.

The 2017 World Junior champion, who is in college in the University of Tennessee and therefore is swimming on the American circuit, has been competing more than most and as a result, has been disrupted less than most in the lead up to these games and now, as she belts down the door of her own personal best, it's clear that she's reaping the rewards. 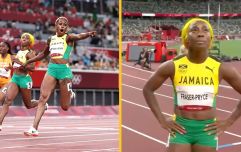 END_OF_DOCUMENT_TOKEN_TO_BE_REPLACED

McSharry is more of a competitor than she is a time trialist though and this much was apparent in her post-race interview with RTÉ's Paul O'Flynn, when the swimmer said that, never-mind the clock, touching the wall first has been her main focus in Tokyo. Having watched Ahmed Hafnaoui, the 18-year-old Tunisian win gold from lane eight in the men's 400-metre freestyle over the weekend, it's clear that this race-based focus is the most advantageous mindset to have.

"I was really just going out there to race. It's all about getting your hands on the wall first," said the Sligo woman.

"It may have been a bit slower, but I feel a bit more confident in how I swam that race than the race previous. No-one is given a medal before they go into a final...we all have an equal chance..."

'I feel a lot more confident in the way I swam that race' - Mona McSharry tells @OFlynnPaul about her delight in reaching the 100m breaststroke final #Tokyo2020 #RTESport #Olympics @swimireland pic.twitter.com/iXR6Xlch12

The pressure may be high but the most refreshing part of all of this is that McSharry, as she talked about stopping to take it all in, seems to be enjoying every second of it.

"Last night after I did my warm down and cool down, it kind of hit me that I was in a semi-final, and that buzz is just unbelievable. You can't get any higher than this. I noticed when I was going down to the start that I was shaking, my arm was shaking a little bit with the excitement of it all.