"We let ourselves down in the League final, but this is championship"

“BRILLIANT” was the word used by both Liberty Insurance Player of the Match Denise Gaule and victorious manager Ann Downey as Kilkenny got their Liberty Insurance All-Ireland Senior Camogie Championship campaign off to the perfect start with a 1-13 to 0-14 victory over Galway.

The Tribeswomen were worthy winners when the sides met in the Division 1 League Final at Croke Park at the end of March but with Anne Dalton and Gaule establishing midfield supremacy in the second half, Michelle Quilty proving elusive up front and Miriam Walsh grabbing a fortunate 35thminute goal, it was the Cats that prevailed on this occasion.

“Coming from the League, we had this on our minds” said Gaule. “We were focusing on this match. It was a tough ‘oul game and we’re just delighted to come out with the right result.

“We wanted to show how we can perform. We let ourselves down in Croke Park in the League Final but… it’s Championship, it’s a different kettle of fish at the end of the day.

“We’ve a lot more hurling done since March. This is a tough place to come and we’re buzzing to get the result.

“You need to have competition for places. You can’t have anyone getting complacent and thinking they’re going to be on the team, that’s when things start to slack, so we’ve had loads of girls coming in, girls coming up from Intermediate as well who are really pushing us all on, driving on the whole atmosphere inside.”

Downey had made no bones about her troops having been second best in the League decider but this was a much improved display.

“Brilliant to come up to Galway and to win, especially in the first game of the round-robin” Downey commented.

“We had to be at our best today. Galway are a super team and they’re not out of this Championship by a long shot and we could be meeting them again but we’re happy with today, happy with our performance. Recover now and look forward to going to Wexford next weekend.

“We were disappointed with our performance in the League Final. We knew in our hearts that we hadn’t done an awful lot but we went back to the field and we’ve trained really hard since that League Final, which is nearly 11 weeks ago and the girls have put in some brilliant effort. It showed today and it paid off. 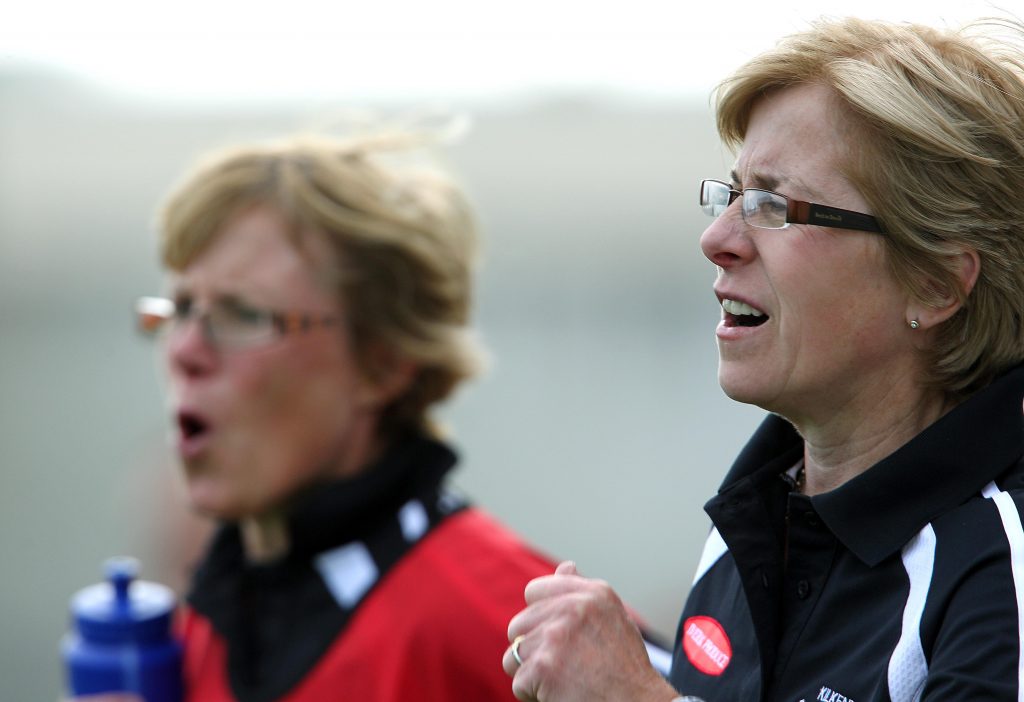 “It’s really disappointing when you have to tell someone that they’re not going to start. It took us four days to decide the team. We started a row last Saturday night and we didn’t end until last Tuesday!

“But isn’t that a great position to be in, to know you have girls that are going to come in and perform for you and people fighting for places? That’s all you can ask for.”

END_OF_DOCUMENT_TOKEN_TO_BE_REPLACED

The sides were deadlocked at the break on 0-6 apiece but Walsh’s shot for a point deceived Galway goalie Sarah Healy early in the second half and though Galway did get back level from the concession of that goal, once Dalton and Gaule thundered into proceedings, Kilkenny were able to get their noses in front with the wind at their backs to record an important victory.

END_OF_DOCUMENT_TOKEN_TO_BE_REPLACED

In the other Group 1 affair, Rebecca Delee scored two goals in the last quarter for Limerick to deny Offaly in a thrilling tie at the Gaelic Grounds by 2-16 to 2-12. The visitors led by 1-7 to 0-8 at half time thanks to Christine Cleary’s goal and when Arlene Watkins responded to Delee’s first major with a green flag at the other end, Mike Wall’s crew still held the upper hand.

They didn’t score again however, while Limerick poured it on with a goal and four points. Niamh Mulcahy providing three points to bring her tally to 11 before Delee made sure.

In Group 2, All-Ireland champions Cork scored 2-3 in injury time and were irresistible in the second half as they registered a 3-19 to 0-9 triumph over Clare in Sixmilebridge. The hosts were in touch at the interval, trailing by just 1-6 to 0-5 after Katrina Mackey’s 19th minute goal.

It was plain sailing for the Rebels after the restart though, Amy O’Connor and Orla Cotter among 10 individual scorers, and Mackey and Linda Collins adding the late goals.

Dubin were pushed all the way to the wire before winning a 1-16 to 0-12 over Meath at Parnells. A Kerrie Finnegan goal gave the Dubs a 1-5 to 0-7 lead at the break and though the excellent Jane Dolan kept the Royals in touch, Sinéad Wylde and Siobhán Kehoe ensured victory for Frank Browne’s side.

The last game between Waterford and Tipperary at The Ragg was abandoned due to a serious injury to a Tipperary player with four minutes of normal time remaining and the Déise girls leading by 1-15 to 0-14.

Beth Carton was in scintillating form for Waterford shooting eight points, while Orla Hickey claimed the goal. Orla O’Dwyer had five points for Tipperary but all thoughts are with the injured player.


popular
Red cards, slips, heroes, villains and last second equalisers - Derrygonnelly's extra time win over Dromore had it all
GAA club transfers that shocked the county: Jason Sherlock
Fermanagh footballer opens up about losing her mum to suicide and urges people to seek counselling
Here's all the GAA games on the tube this weekend as the provincial championship heats up
Ruesha Littlejohn gate-crashes Katie McCabe's interview after another player-of-the-match display
Jordan Larmour enjoys satisfying bit of revenge on Mack Hansen
Frank Lampard admits he 'felt terrible' over comments he made about Paul Pogba
You may also like
3 months ago
Sigerson's striking a sight to behold
3 months ago
Camogie's top four still unquestionable as bumper double-header set for Croke Park
5 months ago
Aoife Doyle scores a goal so good that you'll have to watch it twice
5 months ago
"You’d be blessed to play anywhere on the field" - Teehan taking her chance
5 months ago
After watching a game of hurling, Padraig Walsh finds it hard to sit down and watch anything else
6 months ago
McGrath and O'Connell the stand-outs as Camogie League gets down to it
Next Page