You can break her hurl but that doesn't mean you've stopped Cait Devane.

Clonoulty Rossmore pulled off one of the shocks of the weekend in the Tipperary camogie championship when they knocked Burgess-Duharra out at the semi-final stage, and Cait Devane was in that unstoppable zone.

The 2019 All-Star is widely renowned as the most gifted player in the Premier county with her golden wrists and razor-like ball-striking lighting up not just the club scene, but the county scene in recent years. 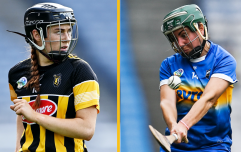 END_OF_DOCUMENT_TOKEN_TO_BE_REPLACED

A scoring extraordinaire, the west Tipperary star regularly racks up tallies in the double figures but in Sunday's county semi-final, it was a point-attempt which dropped agonisingly short that had onlookers taken aback.

With half a hurl, she was able to win a ruck in a sea of bodies but the best was yet to come. The fact that her brother John, a county championship winning manager and former Tipperary hurler, was on hurley-carrying duty certainly paid dividends as the siblings showed tremendous understanding to switch sticks in the smoothest of fashions.

Devane's awareness, to drop her hurl and collect a new one is breath-taking as she powers on down the wing without losing speed. By now, the whole of Clonoulty Rossmore was willing her strike over the bar for what would have been one of the most impressive points you could ever see.

Unfortunately, it dropped short but Devane and Clonoulty Rossmore had done enough as they stretched on to win by two and to set up a county final with Drom and Inch.

This, from Tipperary camogie star Cait Devane, would have been one of the greatest scores ever seen ☄️

PS, the bar has been raised for hurley carriers everywhere.


popular
“Players flourished when Roy Keane left” - Rio Ferdinand on why Keane was a 'detriment' to Man United
Specsavers troll former Liverpool star for Darwin Nunez headbutt claim
Man United considering loan move for Christian Pulisic
"I went up to the Italians and gave them a big auld shoulder" - Paul O'Donovan does it again
The FootballJOE Pub Quiz: Week 50
"To be able to call myself the fastest man in Irish history is just amazing" - Olatunde overjoyed after record-breaking run
The moment Israel Olatunde realised he qualified for the Euro 100m final is what it's all about
You may also like
5 months ago
St Rynaghs do the double on Gailltír as Galway and Tipp cruise home
6 months ago
Tipperary and Kilkenny lay down markers as camogie league gets going
9 months ago
Galway lead the way in camogie All-Star nominations with Cork forward unlucky to miss out
1 year ago
24 hours in the life of the dual player who didn't just play, but lit up two games in two days
1 year ago
Preview: Thrilling weekend of camogie action in store as best four battle it out
1 year ago
Tipp on the cusp of breaking the glass ceiling once again
Next Page