All the way through, this has been the midfield combination for O'Brien.

As soon as Warren Gatland confirmed his 2021 British & Irish Lions squad, Sean O'Brien was all-in on Bundee Aki and Robbie Henshaw starting in midfield for the First Test.

Well aware of Gatland's long-held love of an inside centre banger - along the lines of Jamie Roberts and Hadleigh Parkes - O'Brien felt Aki and Henshaw would be given the 12 and 13 jerseys to face the Springboks.

After starting with Aki against Japan, Henshaw missed the first four games of the South Africa tour with a hamstring strain. He returned against Stormers, last Saturday, and really impressed Alex Goode. The Saracens and England star commented:

"Robbie Henshaw was just so good, defensively, and his work-rate. He's such a key member for the Lions, for me."

In the latest episode of House of Rugby's Lions Series [LISTEN from 21:30 below], Goode, O'Brien and Scotland's Greig Laidlaw all had a go at selecting their Lions XV for Saturday's first dance with the Springboks. 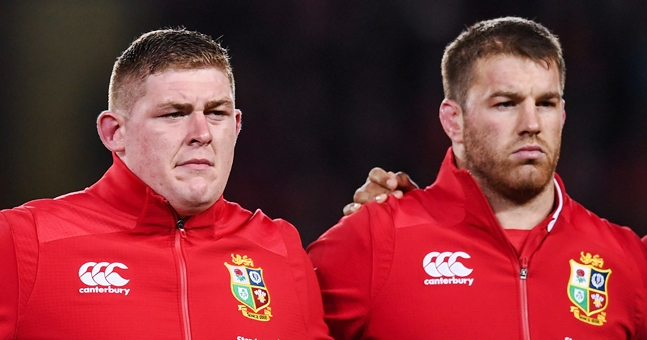 Tadhg Furlong and Sean O'Brien pictured together on the 2017 lions Tour to New Zealand. (Photo by Stephen McCarthy/Sportsfile)
Advertisement

O'Brien has made three deviations from the pack he selected back in April, after the 37-man touring squad was announced. Toby Faletau is out and Tom Curry is in.

"On current form, right now, I'd pick Hamish Watson at 7, Tom Curry at 8 and Tadhg Beirne at 6. I'd pick Jack Conan too, and put him on the bench at least, and then you can move Curry or Hamish around a little bit.

Also coming into O'Brien's selection are Wyn Jones and Jamie George, with Mako Vunipola and Luke Cowan-Dickie dropping down to the bench. One big Lions XV selection that O'Brien is sticking to is his midfield.

"I think it will be Bundee and Robbie," he says. "I think the way the two of them played in the Japan game, in defence and attack, was great. We talk about the physicality and directness of what's coming, if you went with Robbie and Elliot [Daly], you still have that defensive seam sewn up. But, for me, I think Elliot has missed a tackle too many in that 13 slot.

"Elliot is not as comfortable as Robbie or Chris Harris would be, in that slot. But for the First Test, you have to meet fire with fire and you have your most physical defender [there] in Bundee."

O'Brien is also sticking with his back three of Liam Williams at fullback and Anthony Watson and Josh Adams - one of his five selection certainties - on the wings.

Lions assistant coach Neil Jenkins says the wider squad will be told the matchday selection on Tuesday afternoon, with the public finding out the team on Thursday morning.


popular
Ireland make respectful gesture during Parade of Nations at Olympic opening ceremony
The JOE Friday Pub Quiz: Week 253
Cormac Egan's interview after Offaly u20s beat Dublin is everything that is pure about the GAA
After seven years in charge, Armagh have a big decision to make on Kieran McGeeney
Absolutely no doubt who was the top pundit of Euro 2020
"Any team I've been involved in over the last five years, they've been way above their station" - GPS stats gone too far
Pre-match rituals - What it's like in the Croke Park changing rooms before a game