"If you say I can't do something, I'm going to show you I can" - Rory Best

'What would Rory Best think?'

10 months after retiring and those thoughts still swim through Andrew Trimble's head whenever he puts himself out there or steps outside of his comfort zone. What would Rory think of that? Would would he say?

Rory Best has been the towering figure and, in positive terms, influencer over the Ulster team for the best part of 15 years. The current Ulster players jokingly call him 'Pablo Escobar' - due to the special status he is afforded at the club - but Best would tell you he has earned every perk the hard way.

In 2006, two years after his debut and aged 23, Best won the Celtic League with Ulster in a team that featured the likes of Trimble, Tommy Bowe, Stephen Ferris and Simon Best, his brother and captain. What came quickly has not returned, for Ulster, and harder times would soon visit Ravenhill, and the Best family.

Heart issues, detected at the 2007 World Cup, saw Simon Best immediately retire from rugby. It left Ulster, already struggling to capitalise on the league win a year previous, without a captain. Having just turned 24, Rory stepped up and has been stepping up ever since.

The current Ulster and Ireland captain - and Specsavers audiology ambassador - recalls some words of advice from his older brother that have stuck with him ever since.

"That was a fairly tough start. It was very much a baptism of fire, because Mark McCall - shortly after that - left. So I was there as a very young captain, kind of trying to balance between staying together as a squad and making sure we made the right decisions, and I didn't really know what to do.

"I leant on Simon quite a bit during that period. He wasn't in the squad at that stage but I was going, 'What am I meant to do here? There's this happening, there's that happening'. The results weren't going for us; there was pressure coming on.

"He gave me a few words then that I've tried to [use to] captain sides. He said, 'Look, control what you can in terms of your own performance and people will follow that'. And, if they don't, at least you can hold your head up and say, 'I did everything I could'." 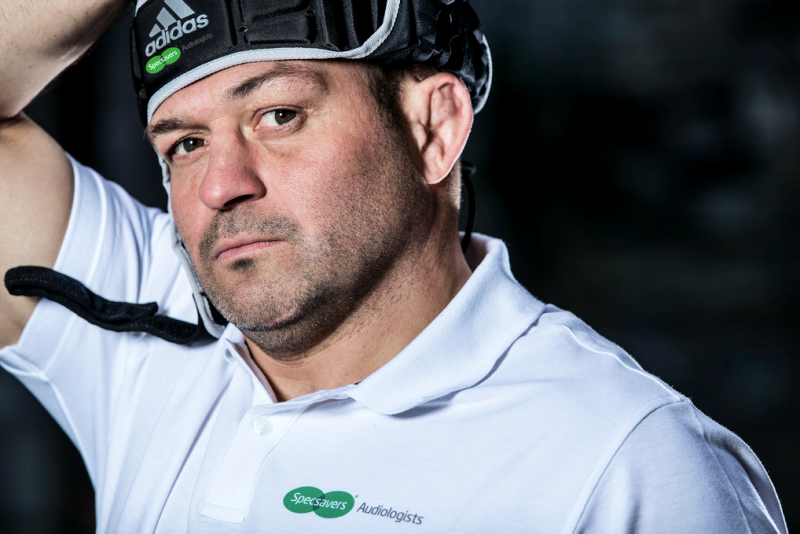 Best has always been someone who has emptied himself for the cause - be that Ulster, Ireland or the Lions - and he picked up early renown as one of the fiercest competitors. Stephen Ferris recalls his first encounter with the hooker, during a match between Dungannon and Belfast Harlequins, ended in him getting an almighty shoeing for dwelling on the wrong side of a ruck for too long.

END_OF_DOCUMENT_TOKEN_TO_BE_REPLACED

Like his older brother, Best starred through the underage set-up in the country. It was an early appearance for Ireland Schools that influenced Best's decision not to sing any of the pre-match anthems, a practice he has stuck to on the highest of stages.

During his in-depth interview for Baz & Andrew's House of Rugby [from 23:00 below], Best explained why you will never see him roaring out a song, or getting too riled up, before big games. 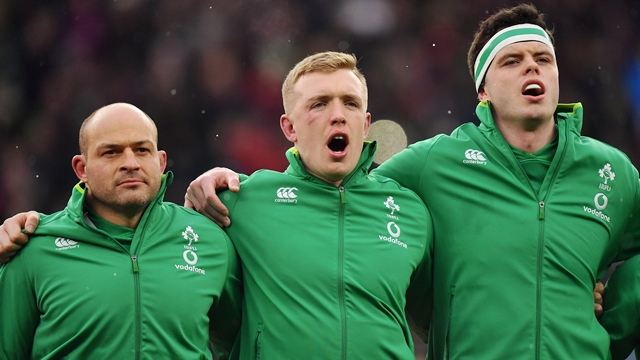 "It was an Ireland Schools game," Best recalls, "and I belted out Ireland's Call.

"I think we kicked off, they caught the ball and kicked it out. We got the lineout and I'd say if our guy was standing on someone's shoulders, he still wouldn't have caught my throw.

"Look, I don't know whether it is down to that or if I didn't practice as much as I should do, but it was very much me going, 'Whenever it comes to the cold-hearted lineout, you've got to take a little emotion out of it. It's just got to be deadly accuracy'. Whether it [not singing] helped or not, it has certainly not done me any harm since the Ireland Schools days... way back in 2000!"

By the end of his first season as captain at Ulster, tough as it was, Best had managed to improve as a player and show the province had asked the right man for the job.

END_OF_DOCUMENT_TOKEN_TO_BE_REPLACED

There was an opportunity to get into Ireland camp, in the summer of 2008, and stake his claim for the Ireland No.2 jersey. He had won 22 caps in his first three years with Ireland but nine were off the bench and he was constantly duelling with Munster's Jerry Flannery for the right to start. 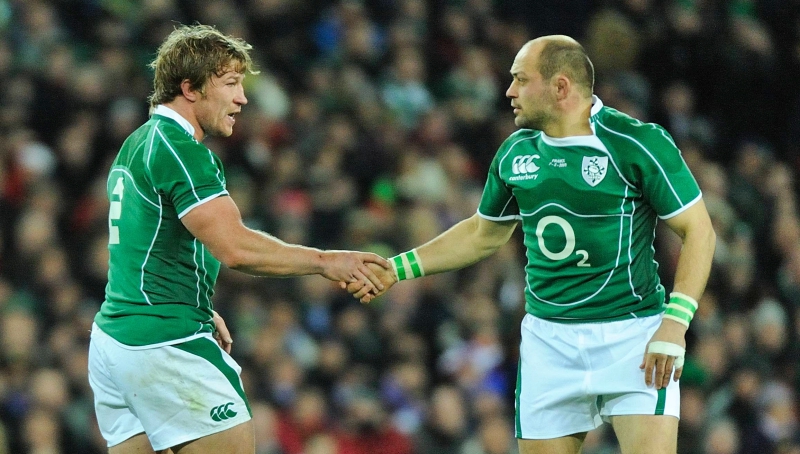 That summer's tour to Australia and New Zealand - with Declan Kidney shadowing caretaker coach Michael Bradley before he permanently took up the role - was a changing point in Best's career. Ferris recalls Best smoking Flannery at a bleep test, but the Ulsterman's take is modest.

"It was a bit of a fitness session... Jerry is a very, very determined guy as well, so I'm not 100% sure that I necessarily [won] but I do remember doing a session over there and we were definitely going hammer and nail at each other.

"I wouldn't be so bold as to say I definitely won out, but the thing about my rivalry with Fla was that he showed me that, to get to the next level, where your fitness needed to be. In fairness to him, he was a machine at that. I came in and was a wee bit more... I wasn't in the shape that I needed to be in.

"I thought I was in okay shape until I saw him. I looked at that and said, 'Right, well he's starting now and if I want to get past him, I've got to be as fit as him'. That made me knuckle down and work really, really hard. People talk about competition for places. That's where it is invaluable, especially when you have a player of his ability... it drove me on to try and be better."

Best and Flannery would go 'hammer and nail' for three more years but the Ulster hooker has been the country's undoubted No.2 since 2011. He captained Ireland for the first time in 2009, did so again in 2012 (when Paul O'Connell was injured) and took up the role full-time from the 2016 Six Nations until the present day.

Leading Ireland to a Grand Slam in 2018 is his proudest memory as captain but those two victories over the All Blacks rank pretty highly too. He has amassed 117 caps and will look to add as many to that number with summer Tests and as long a run as possible at the World Cup.

He will walk away from Ireland after that and may do likewise with Ulster, but it is hard to see him not being tempted back for a swansong up at Kingspan Ravenhill next season. He'll miss those big match-days but he could do without so many gym sessions when he steps back and heads home to the farm.

He will also miss bringing his children, Ben, Penny and Richie, out onto the field with him and into the dressing room to help him enjoy those big wins and special performances. 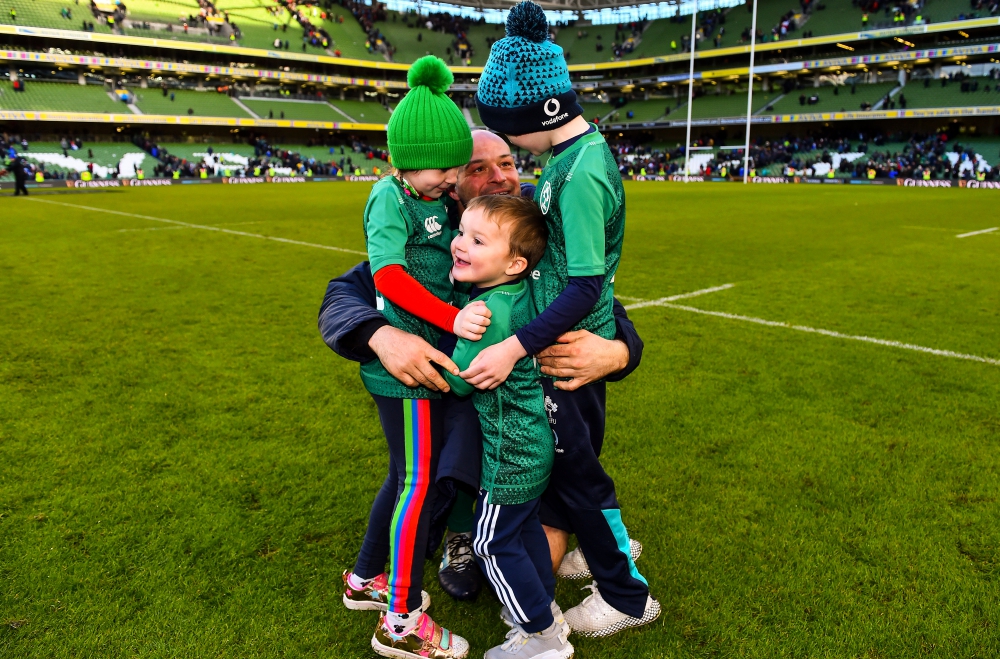 "Jodie is great because she brings them to everything," says Best of his wife and children. It was the wife of Clinton Schifcofske, the Australian who played two seasons with Ulster, that offered some good advice to Rory and Jodie not long after they were engaged.

"She said that Clinton and herself felt it was really important that the kids went to see the games, and see that dad doesn't just play rugby for a bit of fun and get paid for it. That it's actually a tough existence and a tough way to earn your money, at times. And that Clinton's children appreciated everything he went through."

Best has endured some tough times, off and on the field, and he has done damage to his body. Currently out with an ankle ligament injury, he had neck worries in 2009 - when the prospect of retirement was first touched upon - and 2011, and he once played on for a couple of minutes against New Zealand after breaking his arm.

Jodie has been supportive of his rugby journey from the get-go and, while not holding back with her own opinions, has been a sounding board for her husband over the 16 seasons (and counting) of his professional career. One conversation with his wife stands out as a good example of that fighting spirit that should see him represent Ireland in a World Cup at the age of 37.

"We've been going out a very long time," says Best, "and she has seen me coming through the schools system and right on up in through the national set-up, become captain and the Lions Tours as well. She has seen a lot of heartbreak, as well as the ecstasy...

"What happens when you turn 30," he adds, 'is that everyone around you tells you that this is is. This is your last contract. 'Ohh, you're 30'.

"In that regard, Jodie is really good as well. She said, 'Why? Just because you're 30, do you think you are playing any worse?' Given my nature, I'm very much, if you say I can't do something, I'm going to show you I can."

Given his nature, Rory Best has been showing he can do it on a rugby field for over 20 years now.

There are more aches but he is not getting out of the bed sideways just yet, and he is far from finished.

CHECK OUT THE FULL RORY BEST INTERVIEW FROM 23:00

popular
The SportsJOE 12 o'clock quiz | Day 76
SportsJOE 2000s Football Quiz | Round 4
The SportsJOE 12 o'clock quiz | Day 75
The SportsJOE 12 o'clock quiz | Day 73
SportsJOE 2000s Football Quiz | Round 2
Conor McGregor's next fight narrowed down to two options
One of the UFC's most hyped prospects admits to copying Conor McGregor
You may also like
6 days ago
You'll be hard pushed to get full marks in this Serie A quiz
6 days ago
Nigel Owens on how the O'Driscoll and O'Connell captaincy dynamic worked
6 days ago
Tadhg Beirne on the Wayne Pivac request that helped change his career
1 week ago
Baz & Andrew's House of Rugby - Tadhg Beirne and John Cooney
1 week ago
'We knew how much it meant to them' - Conrad Smith on Croke Park history lesson
1 week ago
"I was like, 'Your ribs will be broke, alright, if I get my hands on you again!'"
Next Page