Former Leinster captain Shane Jennings has said that he has no sympathy for Bath fly-half Freddie Burns after he squandered a late chance to score a match winning try for the Premiership side against Toulouse on Saturday.

Bath were trailing Toulouse 22-20 in the final five minutes of their Champions Cup opener at the Rec when Burns sliced through the defence to cross the line for what should have been a routine try.

The England international began to blow kisses and bang his chest as he prepared to ground the ball in the in-goal area before Toulouse winger Maxime Medard raced in behind him to knock the ball loose and ultimately seal the win for the visitors.

Jennings, who won three European Cups with Leinster, said that he had no sympathy for Burns and that he was in complete control of the situation.

Five minutes to go...
Chance to win the game...

"I don't have much sympathy for him at all," said Jennings on Virgin Media Sport.

"He did it, he's made a mistake, he's trying to rectify it. He ran an unbelievable line to get into the position; just put the ball down. You've done yourself justice, get your team back to where they want to be. Don't be giving it this one [bangs chest]. Honestly, people go that's unfortunate, he was in control of that situation. He could have put the ball down, try and they would have won the game. That's terrible."

"For all the youngsters out there, that's not what you do."@RonanOGara10 on Freddie Burns' nightmare moment at the Rec this afternoon.#ChampionsCup pic.twitter.com/6qMDfHQXwy 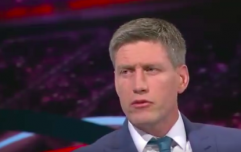 ROG hits the nail on the head assessing Ireland's performance

END_OF_DOCUMENT_TOKEN_TO_BE_REPLACED

O'Gara added that Burns will know that he's made a vital error but that it's important for him to front up and never put himself in that sort of position again.

"It's very unfortunate for a player," said O'Gara.

"He's not a young player. He's got plenty of experience at this stage. Anyone can miss a kick at goal but to have what happened to him trying to place a ball down... for all the youngsters out there that is not what you do and I think that's the key message out of it.

Bath head coach Todd Blackadder said that he thinks that Burns did not mean to make that mistake but that he was pleased with the effort his side made after Burns had missed a routine shot at goal minutes earlier.

"This is probably the time we need to rally around him."

Todd Blackadder offers support for Freddie Burns after his mistake against Toulouse. pic.twitter.com/ZjBGxNTj8C

"You could see that it hurt him and you could see that it's obviously affected him really badly but he'll be hurting just like everyone else. It's probably the time we need to rally around him. He didn't mean to make that mistake, I'm sure it's a mistake he'll never make again, but I was just pleased with the effort. Especially when he missed the kick with just how hard we rallied to put ourselves in a position where we could have won it."


popular
'Were they up for it more than us? That's my responsibility' - Andy Farrell
Baz & Andrew's House Of Rugby - Twickenham carnage
Jacob Stockdale and Johnny Sexton not spared by English press
ROG hits the nail on the head assessing Ireland's performance
The Ireland XV that should definitely start against Italy
Triple Crown wrenched away as England scrape Ireland off their boots
QUIZ: How well can you remember this season's Premier League results so far?
You may also like
2 weeks ago
Can we please, please get the ball to these lads?
2 weeks ago
Baz & Andrew's House of Rugby - Ronan O'Gara and Shane Williams
3 weeks ago
The inside story of Ireland's greatest Six Nations moments
3 weeks ago
O'Gara gave away his Grand Slam jersey, but Jones came to the rescue
4 weeks ago
"It's miles easier playing than it is watching" - O'Driscoll
3 months ago
Devin Toner on thoughtful Ronan O'Gara message after World Cup heartache
Next Page