That's what teammates are for.

On Friday, at the Captain's Run in Lansdowne Road, Conor Murray emerged from the tunnel holding the hand of uncapped Leinster back, Jimmy O'Brien.

The Munster man, who made his 100th cap on Saturday, was having a laugh with his inter-pro rival, and easing his way into the world of Test rugby.

END_OF_DOCUMENT_TOKEN_TO_BE_REPLACED

O'Brien was drafted into the Ireland match-day squad to cover the backline after Robbie Henshaw's injury saw Stuart McCloskey promoted to the starting XV. 26 minutes into a brutal, gripping Test match, McCloskey was off with a hand injury and the Kildare native was on at outside centre for his Test debut.

The 25-year-old can cover all backline positions, bar scrumhalf, and even has some experience playing 10. Still, he would have been expecting to cover the back three, until that unfortunate McCloskey injury.

O'Brien looked a natural at Test level and made a number of big defensive tackles, as well as timing the final pass well for a Mack Hansen try assist, after a sweeping Irish attack. Following the game, Ireland captain Johnny Sexton praised his provincial teammate, before [ever so gently] tossing him under the bus.

"His versatility is pretty unique,” said Sexton, after his side's 19-16 victory. "He’s played 10 for Leinster as well, he’s a fantastic footballer.

"We thought he wasn’t fazed, but he told us he was sh**ting it after the game! He came on and was straight into it. He knew what was going on, he knew everything, he just did his role very well.

"Fair play to him, most people get their first cap in a smaller game. He gets it against the world champions. What an amazing performance from him."

On the 'sh**ting it' line, Ireland coach Andy Farrell raised his eyebrows and remarked, "Jimmy never told me!" 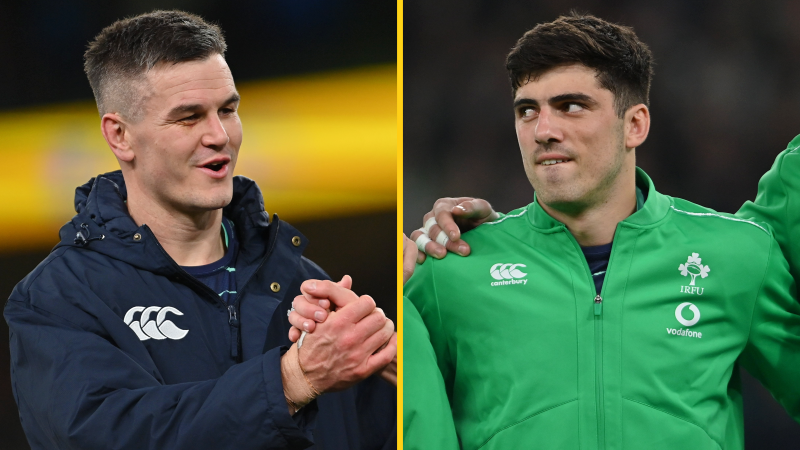 Following the game, decked out in his suit and ready for the post-match function, Jimmy O'Brien reflected on an all-action Test debut. On getting dunked in to the fray, and Johnny Sexton's remark, he said:

END_OF_DOCUMENT_TOKEN_TO_BE_REPLACED

"First half I thought there was no way [I would be sent on], I thought they'd bring Joey Carbery on, and get Johnny to cover 12.

"There was a split second when I was maybe s***ting it but got over that quickly!"

O'Brien said Andy Farrell had told him he might be covering 13, if required, so he had made sure he was across all his detail, there, and what was required if he was called upon.

"I would say the camaraderie of the group is amazing," he told us. "Everyone is so delighted, I was nervous about my first cap but the lads were so happy, they filled me with confidence being so relaxed about me playing 15, wing, 13, it speaks volume for the group we have.

"I chatted to Garry, said, 'Let's do this' and from there it flowed. No-one batted an eyelid, which filled me with a lot of confidence."

O'Brien will be hoping he will get a start in next Saturday's clash with Fiji, at Aviva Stadium. He may revert back to the wing but has already shown he can cope well at centre on the international stage.


popular
Sean Dyche set to be named Everton manager after Marcelo Bielsa talks break down
Roy Keane flatly rejects longstanding perception of ex-Man United midfielder Paul Ince
Allianz National Football League Round 1: All the action and talking points
Conor McGregor hit by car ‘at full speed’ while cycling
Roy Keane leaves ITV pundits in stitches after Pep Guardiola's pre-match interview
Quiz: Identify these 15 football clubs that are not named after a place
"I don't like to fill my time that way" - O'Hora going his own way in an era of obsessives and covering all bases
You may also like
3 days ago
"He didn't give me that jersey back!" - Johnny Sexton on new rival Jack Crowley
5 days ago
Robbie Henshaw on his life-long friendship with Bundee Aki and Netflix documentaries
6 days ago
Munster get brutal Champions Cup draw as Leinster face Ulster in Last 16
1 week ago
“He's gonna be pi**ed when he hears this!” – Anthony Watson's Vegas trip with Tadhg Furlong
1 week ago
Kieran Treadwell the most unfortunate Ireland player to miss Six Nations call
1 week ago
Joey Carbery the biggest selection casualty as Andy Farrell gets ruthless
Next Page