"They are absolutely phenomenal athletes, and good rugby players."

Stephen Ferris knows all about what it is like to face a fully-loaded, world champion South Africa side when Irish fans are expecting the best.

Back in 2009, as Ireland revelled in their Grand Slam win and their healthy contingent (including Ferris) on a close, hard-fought Lions Tour to South Africa, the Springboks came to Dublin to face Declan Kidney's side.

END_OF_DOCUMENT_TOKEN_TO_BE_REPLACED

Ferris started that day, in dense Dublin fog at a sold-out Croke Park, and helped Ireland to a thrilling, tense 15-6 victory over the reigning world champs.

13 years on, and South Africa - after a five-year gap - are back in Ireland. They are world champions again, and are not long off another winning Test Series against the Lions.

The difference, this time, is that Ireland are even more stacked with talent than before. Brian O'Driscoll, Paul O'Connell & Co. have moved on, but they have been replaced with a talented roster and players that have taken big scalps, of late, at home and abroad. It will be far from easy, of course, but Ferris backs Andy Farrell's Ireland to get the job done.

"I don't think South Africa are going to be throwing the ball around, all over the place, on Saturday," Stephen Ferris tells us.

"I don't think that De Allende is going to be making line-breaks with the backline challenging the (Irish) line. It's going to be very much more of the same - kick the ball, live off Ireland's mistakes, try and dominate the set-piece. When it comes to ruck or breakdown, try to destroy everything in front of them.

"That's the challenge for Ireland. That's what we always talk about - can they meet fire with fire when it comes to the big physical sides? Like England, when they are absolutely pumped and fully loaded - as they have been in previous years - and like South Africa. We'll wait and see, but I fancy their chances. With the way they been playing over the last couple of years, I certainly think Ireland are the team that can put South Africa back in their box."

After seeing a clip of Ferris making that claim, over on RugbyJOE's Instagram account, Springbok legend Victor Matfield responded: 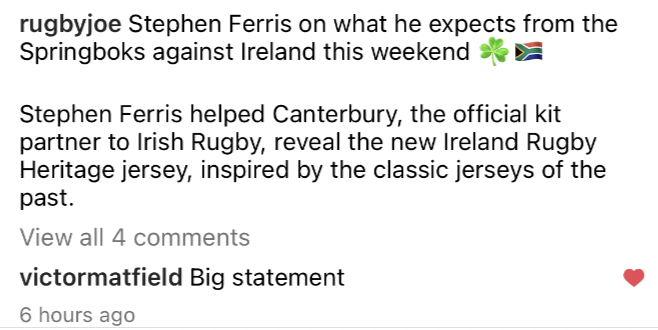 Andy Farrell will name his starting back-row - to take on Kolisi, du Toit and Wiese - on Thursday afternoon.

While Ferris would put Jack Conan in any back row he was selecting, the House of Rugby team [from 32:15 below] of Greg O'Shea, Lindsay Peat and Jason Hennessy were leaning towards an O'Mahony-van der Flier-Doris axis for the big game. 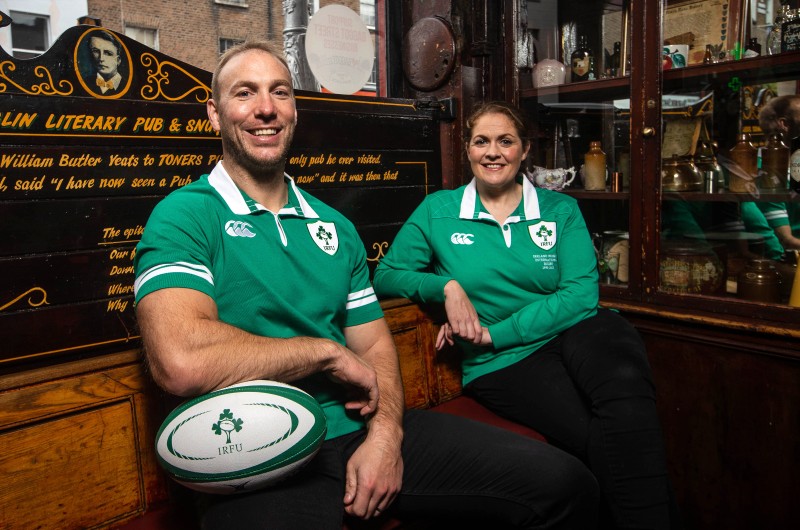 Canterbury, the official kit partner to Irish Rugby, has revealed the new Ireland Rugby Heritage jersey, inspired by the classic jerseys of the past.

South Africa 'one of the biggest physical tests' - Stephen Ferris

In his Test career, Stephen Ferris split two matches against South Africa, as well as facing their franchises and clubs in a couple of 2009 Lions Tour outings.

Added to that experience, he shared the field, for Ulster, with class act South African players like Johann Muller, Ruan Pienaar, Stefan Terblanche, the late Pedrie Wannenburg, and more. Despite his confident Ireland prediction, he has nothing but respect for the Boks.

"It certainly is one of the biggest physical tests," he says.

"Back then, you were allowed to do this slingshot. I remember Pierre Spies was carrying the ball into contact, and Bakkies Botha would just grab him just throw him into contact! It was like somebody just getting a catapult and going 'Booooiinng', with this 115kg piece of muscle, in Pierre Spies, who was just, like, ridiculous. It was sort of like, just put your body in the way and hopefully they'll fall over you.

"It was very difficult to just go up, put line-speed on them and just smash them back. The game, obviously, has changed, the rules have changed - and rightly so - but it's really difficult to... when a South African team gets a bit of go-forward, and momentum, how do you stop it? There needs to be a game-changing moment where somebody comes out, makes a big hit, a counter-ruck, and just stalls that for two or three seconds to stop these two or three men from gathering momentum. And it's so much easier to say it, than to do it."

Saturday will see both sides go with fully-stacked teams at a packed out Aviva Stadium.

Ferris is eight years retired but, at 37, still looks like he could hold his own in a big old breakdown battle. Would he like to be out there, emptying any tank he can pry loose for the cause.

"Thanks, but no thanks," he jokes. "I've done my time, and have the bumps to prove it!" 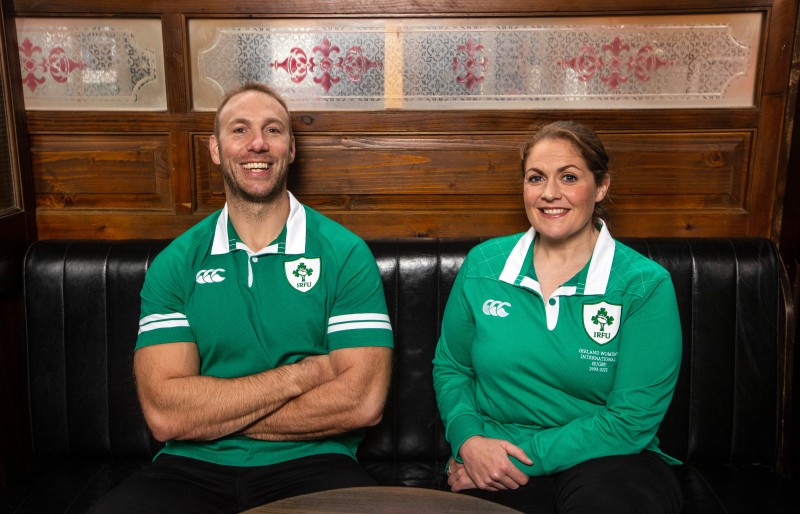 The Heritage jersey is available now via Intersport Elverys in store and via Elverys.ie, and on Canterbury.com. Pictured at the launch of the heritage jersey are former Ireland internationals Fiona Coghlan and Stephen Ferris, in Toner’s Pub, Baggot St, Dublin.


popular
Sean Dyche set to be named Everton manager after Marcelo Bielsa talks break down
Roy Keane flatly rejects longstanding perception of ex-Man United midfielder Paul Ince
Allianz National Football League Round 1: All the action and talking points
Conor McGregor hit by car ‘at full speed’ while cycling
Roy Keane leaves ITV pundits in stitches after Pep Guardiola's pre-match interview
Quiz: Identify these 15 football clubs that are not named after a place
"I don't like to fill my time that way" - O'Hora going his own way in an era of obsessives and covering all bases
You may also like
5 days ago
Liverpool reportedly selling Caoimhin Kelleher for Jude Bellingham funds
5 days ago
Robbie Henshaw on his life-long friendship with Bundee Aki and Netflix documentaries
1 week ago
Evan Ferguson sends Soccer Saturday panel bananas with late equaliser
1 week ago
Eamon Dunphy blames Roy Keane's behaviour for Declan Rice choosing England
1 week ago
Can you name the Republic of Ireland Premier League player from their wikipedia?
1 week ago
Kieran Treadwell the most unfortunate Ireland player to miss Six Nations call
Next Page