Midway through his second full season with Leinster and Ireland, James Ryan has only lost twice (Australia and Toulouse). One would think he has taken big victories as a matter of course but the Leinster lock tells us he always takes time out to toast the triumphs.

2018 has seen Ryan on teams that won the Guinness PRO14, Champions Cup, Six Nations (and Grand Slam) and toppled the All Blacks. He has been included in a slew of World's Best XVs and finished second as SportsJOE's Player of 2018, just behind Tadhg Furlong.

There was more praise for Ryan on the latest episode of Baz & Andrew's House of Rugby ahead of the latest slate of Guinness PRO14 interprovincial action. Ryan also responded to a gym story that did the rounds after Ireland's Six Nations triumph earlier this year. 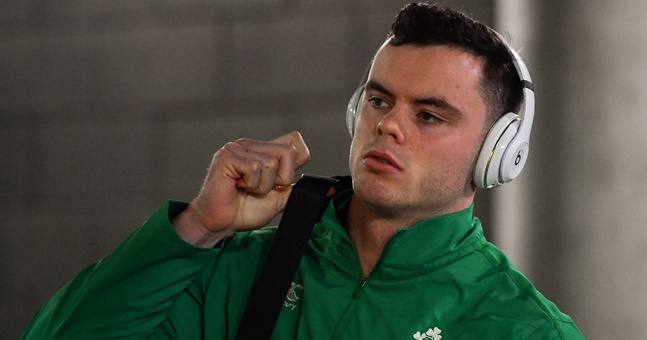 Soon after the Grand Slam arrived back in the Emerald Isle, Leinster and Ireland teammate Johnny Sexton told The Left Wing:

"Look, I was down at David Lloyd's [Gym] this morning, swimming with my kids, and Dan Leavy and James Ryan were coming out of the gym and swimming pool there.

"There are some guys that are professional beyond their years, and [you'd think] they shouldn't be as professional but they are. So that is obviously great to see. These guys are thinking forward already."

Pushing tin just over two days after helping Ireland to a memorable Grand Slam. Some going. It turns out that only one part of Sexton's tale was true. Ryan told us:

"Sexton saw us going into the gym but I'm not going to lie - we were going in for a swim. We weren't going to the gym.

"No, I did enjoy the Grand Slam win. They were class celebrations. And I got down to Galway as well. I had five or six days off so I headed West with two or three mates. I got to soak it all in."

END_OF_DOCUMENT_TOKEN_TO_BE_REPLACED

Just a swim to clear the head after the title-winning revelry. Himself and Leavy are driven young men, but they're not machines, thankfully.

Ryan says most of his close friends don't play rugby so he enjoys spending time with them to get away from the day-to-day grind of the pro game. They are also great, he jokes, at keeping him grounded and not allowing him to get a big head.

With all the praise flying around for the 22-year-old, it is good to know that his mates are keeping his head on his shoulders.


popular
The SportsJOE 12 o'clock quiz | Day 103
James Haskell on text exchange with Peter O'Mahony after Ireland's victory over Scotland
SportsJOE 2000s Football Quiz | Round 8
The SportsJOE 12 o'clock quiz | Day 102
"The academy boys have turned into small monsters over the past few weeks" - Peter O'Mahony
"I have more work done than any player in Ireland" - The Trevor Giles tribute show
Can you name the first clubs these players went to after leaving Celtic?
You may also like
1 day ago
Baz & Andrew's House of Rugby - Keith Earls joins us for Season Two finalé
3 days ago
"Having one of the best in the world to emulate has been really good"
3 days ago
QUIZ: How well do you know Paul McGrath's football career?
4 days ago
"I'm so proud of the opportunities Ireland gave me and of the woman I am today" - Linda Djougang
5 days ago
"As a team, we’re ready to take a trophy home now" - Craig Casey
1 week ago
The brutal training drill every rugby pro has to get through this week
Next Page