Over the course of the season, the one thing that stands out is how consistently good so many Irish players were.

In March, Joe Schmidt's men claimed the Grand Slam by walking into Twickenham and completely outclassing the reigning champs England. Victory was never in doubt on a Baltic day in London.

Our Player of the Six Nations was Jacob Stockdale, who set a tryscoring record for the championship. Conor Murray, Tadhg Furlong, James Ryan and Garry Ringrose and Robbie Henshaw - two of the three men to play 13 - were not far behind.

Ireland then set off for a three-Test series against Australia. Their winning streak was ended in Brisbane but they rallied superbly to win in Melbourne and Sydney and claim a series win Down Under for the first time in 40 years.

CJ Stander had a fine tour, as did Furlong and Murray, but Leinster lock James Ryan was our man of the series. He played every minute of every game and was an immense ball-carrier and physical presence throughout.

On to the autumn internationals, including a return to Chicago's Soldier Field and the Guinness Series against Argentina, the USA and New Zealand. Schmidt and his coaching staff were practically running two squads out of Carton House.

Tadhg Beirne, Jordan Larmour and Andrew Conway impressed against Italy and the USA but the heavy lifting was done against The Rugby Championship sides. Argentina were doughty foes but Ireland hammered them and made them wilt after the break. The following week saw Sexton's kicking and a Jacob Stockdale wonder score do for the All Blacks in the defining game of Peter O'Mahony's career, so far.

Our top-rated Irish players from the Argentina and New Zealand games were Bundee Aki and O'Mahony but, again, Furlong and Ryan were right up there.

Looking back on the calendar year, then, and we have narrowed the 'Best Player' selection to five, with apologies to Conor Murray. He is the best scrum-half in the world but misses out after injury saw him sit out the November Tests. Counting down from 5 to 1, we have.

END_OF_DOCUMENT_TOKEN_TO_BE_REPLACED

Three tries in 10 Test outings this year and three different midfield partners too. Scored against Italy and Wales in the Six Nations and had a fine tour to Australia. Finished the year with big outings against Argentina and New Zealand.

Some may look at this list and ask how the World Player of the Year finished only fourth in our Irish selection. This is taking nothing away from the incredible 12 months Sexton had but three other Irish players shaded him for impact, consistency and huge moments.

There would have been no Grand Slam without that Sexton drop goal against France but it is worth remembering that all 15 players had big parts to play in the 41 phases that led up to that moment. Sexton was brave enough to find Earls with a cross-kick that won crucial yards and 'Le Drop' was exquisite.

Recovered from kicking yips against Wales to nail crucial scores against Scotland and England. Recalled to the Ireland XV for the wins over Australia in Melbourne and Australia. Not at his best against Argentina but magnificent against the All Blacks.

END_OF_DOCUMENT_TOKEN_TO_BE_REPLACED

Eight tries in 10 Test matches and an attacking threat that only Australia managed to find a way of containing. Seven tries in the Six Nations after a tough start in Paris. His scores against Wales, Scotland and England were all momentum-swingers and game-changers. 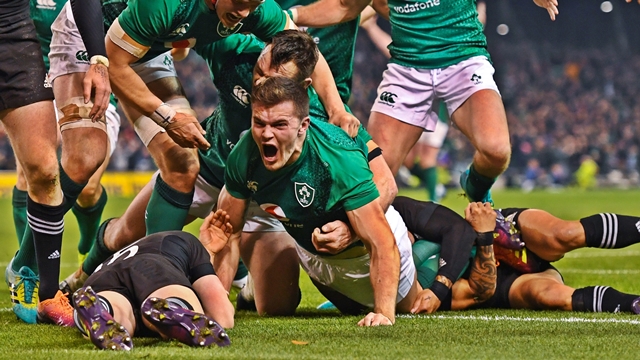 Was sent to Chicago to play Italy and responded to the challenge with line breaks for fun in the first half. Solid against Argentina and a matchwinner again when New Zealand came to Dublin. His chip, chase and score in the second half will long be remembered and cherished.

The model of class and consistency all year. Pushed our winner extremely close and pushed opponents even harder.

Always seems to get over the gainline on carries and is a work-horse all over the park. During the Six Nations, Ryan got two 9/10 and two 8/10 ratings from us. He kept that intensity and purpose to his game Down Under and was Ireland's best player. Followed that by ramming Argentina out of it and outgunning Whitelock, Retallick & Co. on November 17th. 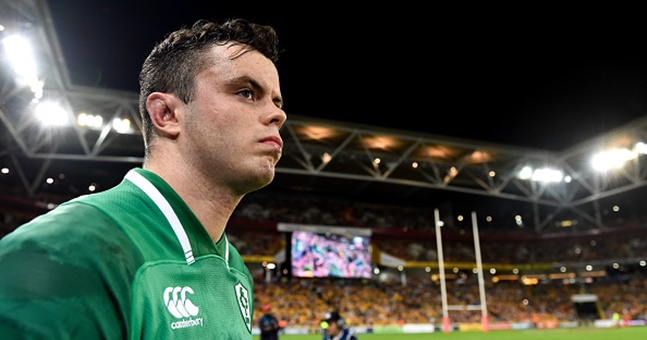 How he did not make some world's best XV selections we'll never know. Has still only lost two games of rugby in a season and a half of rugby at the highest level and is making quite a collection of man-of-the-match awards. 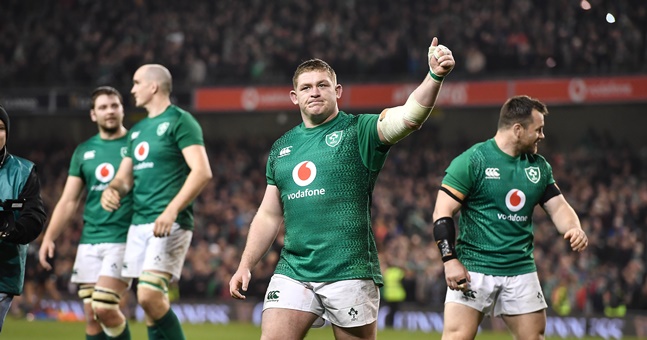 Sexton was a good shout for the World Rugby Player of the Year award but the whole awards ceremony was demerited by Furlong not even being on the final shortlist. I'm sure we care more than he does - he finishes 2018 with a stack of medals and great memories.

Showing up as first receiver and a passing option in set-plays for province and country, most notably to set up the CJ Stander try against England. Made crunching carries, scored a crucial try in the Melbourne win over the Wallabies and both scrummed and played Argentina and New Zealand off the park to wrap up his year.


popular
Justin Gaethje tells Conor McGregor to wait his turn
QUIZ: Correctly identify these World Cup 2014 players from their stickers
The SportsJOE 12 o'clock quiz | Day 73
QUIZ: Can you name the Football Italia cult heroes? | Part 2
SportsJOE 2000s Football Quiz | Round 3
QUIZ: The toughest football legends quiz you'll take today
Carl Froch debuts 'nose job' on Sky Sports News, and the reaction is inevitable
You may also like
3 days ago
You'll be hard pushed to get full marks in this Serie A quiz
3 days ago
Nigel Owens on how the O'Driscoll and O'Connell captaincy dynamic worked
3 days ago
Tadhg Beirne on the Wayne Pivac request that helped change his career
6 days ago
Baz & Andrew's House of Rugby - Tadhg Beirne and John Cooney
1 week ago
'We knew how much it meant to them' - Conrad Smith on Croke Park history lesson
1 week ago
"I was like, 'Your ribs will be broke, alright, if I get my hands on you again!'"
Next Page