"We knew the storm was coming. It was about how we responded" - James Lowe

James Lowe returned to New Zealand with a clear agenda - beat the side that he once dreamed of playing for.

The Leinster winger pulls no punches about his long-held desire to represent the All Blacks at Test rugby. He clung to that hope until his mid 20s when it looked to have been dashed. Despite his form with the Chiefs, lining out for the Maori All Blacks, as he did against Munster in 2016, appeared to be the best he could hope for.

Lowe can still recall the time he sat with his father, Geoff, and, in tears, tell him, "It's not happening. It's not going to happen." In 2019, Lowe told us:

"I just thought, 'Man, I've been playing good footy for the last few years and I haven't made it. I'm not there.'

"I sat in the car and was talking to my old man on the phone. He said, 'I thought you were going to be an All Black by now'."

END_OF_DOCUMENT_TOKEN_TO_BE_REPLACED

A decision was made, not long after. Lowe would leave family, friends and his old life behind. He and his partner would travel to Ireland to make a new life for themselves. That he did, and he has been a key figure to Leinster, on and off the pitch, and has embraced life in his new home.

He enjoyed a special Ireland debut, then struggled when trying to play through injuries. Andy Farrell showed faith with him, in 2021, and neither the winger nor the Ireland coach have looked back. 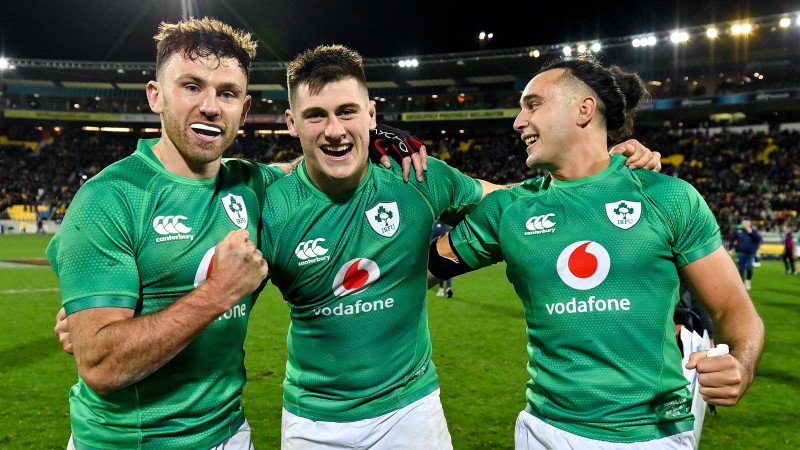 Ireland players, from left, Hugo Keenan, Dan Sheehan and James Lowe after their side's victory in the Steinlager Series. (Photo by Brendan Moran/Sportsfile)

Standing on the pitch at Sky Stadium, after a 32-22 victory that secured Ireland's historic Test Series win over the All Blacks, James Lowe try to put it all into words.

"We knew after the First Test that that wasn't our best performance. We were ill disciplined and we weren't good on our transition defence. We fixed those two bits, tightened things up and tried to stop New Zealand getting those easy tries.

"We let a couple in today, especially after half-time, but two wins on the bounce in New Zealand, mate, it's something that... who would've thought?"

"They're the best team in the world, still," Lowe added. "You can't take that for granted. We were able to put in a performance and, especially at the start at that second half, we knew that storm was coming. We knew they were going to get purples patches, and it was about how we responded. We got one chance and we scored and it was like, 'Yeah, we're here. That's us!'"

END_OF_DOCUMENT_TOKEN_TO_BE_REPLACED

Told by Sky Sports NZ pundit, and former Connacht star, Mils Muliaina that Wellington 'felt like Dublin' with the noise from the Irish crowd, Lowe joked, "It's beautiful, isn't it?!"

Grant Nisbett, the match commentator, referred to Lowe as, 'born in New Zealand but an Irishman, at the moment'. While some may be irked by that line, and all the references to Guinness and whiskey being consumed by Irish players and fans, Nesbitt is right.

Lowe is born in New Zealand and is a proud Kiwi. He is also a passionate, dedicated Ireland international and a guy that has taken this country, and its' fans, to his heart.

"The travelling support of the Irish isn't matched, anywhere around the world," said Lowe. "Who'd have thought. The Irish were coming from Australia, all over New Zealand, all our family and friends, they all came, for all five matches.

"We were able to get the job done and I can't even put it all into words."


popular
“Players flourished when Roy Keane left” - Rio Ferdinand on why Keane was a 'detriment' to Man United
"To be able to call myself the fastest man in Irish history is just amazing" - Olatunde overjoyed after record-breaking run
Specsavers troll former Liverpool star for Darwin Nunez headbutt claim
Jamie Carragher on the three Man United players Erik ten Hag can't trust
"I went up to the Italians and gave them a big auld shoulder" - Paul O'Donovan does it again
"There's a hole in the ceiling, about three-foot round" - Andy Townsend on life as Gazza's housemate
"It was unfair on the Galway backs” - Tomás Ó Sé admits that Kerry benefitted from unfair rule
You may also like
2 weeks ago
“My confidence was on the deck" - Aaron Connolly explains why he has made the move to Italy
2 weeks ago
Every Irish transfer in football, this summer, as several big deals get done
3 weeks ago
Six Irish players make damn impressive 'World XV' that would take some beating
3 weeks ago
The frontrunners for Ireland's 33-man squad for the 2023 World Cup
4 weeks ago
All Blacks media manager explains why Ian Foster appearance was cancelled after Ireland defeat
4 weeks ago
Warren Gatland selects nine Irish players in his strongest Lions XV, right now
Next Page