Wellington was the setting Andy Farrell's Irish side created history against the All Blacks. Here are our full Ireland player ratings after another night to remember.

Ireland started superbly in the opening stages, for the third Test running, and were rewarded with a rolling maul try for Josh van der Flier.

Jordie Barrett made it 5-3 with a penalty, but Andy Farrell's side answered back with a Hugo Keenan try that Sexton converted.

Sexton landed an impressive 49-metre penalty after some Beauden Barrett indiscipline and the first half ended with a third Irish try, with Caelan Doris and Bundee Aki doing well and Robbie Henshaw put clear for the score.

At half-time, it was NEW ZEALAND 3-22 IRELAND and a historic, first ever series win on Kiwi soil was in reach. 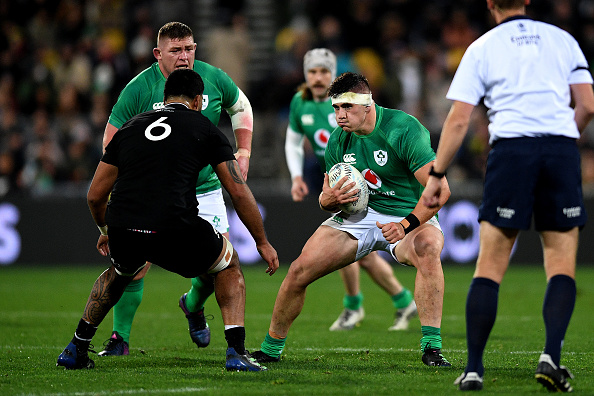 All Blacks fire back

The second half started off exactly as New Zealand would have hoped, as Ardie Savea bulled over for an early try that Jordie Barrett converted.

END_OF_DOCUMENT_TOKEN_TO_BE_REPLACED

The home fans were baying for an Andrew Porter red card, and with good reason, when the prop went high on Brodie Retallick. It was only a yellow, but the All Blacks made the numbers count, almost immediately, as Akira Ioane beat three men to score.

The lead was down to five points but more Sam Cane indiscipline gave Ireland a penalty that Sexton converted to settle the ship. When another Sexton kick, from halfway, struck the crossbar, New Zealand countered and Will Jordan scored in the corner to make it 22-25.

Just as Ireland may have looked to be wobbling, they won a penalty, bravely kicked for an attacking lineout and Rob Herring did the rest with a powerful score. There was still big defence needed, with Tadhg Beirne coming up with three big turnovers, but Ireland ended up on the attack as the hooter went and history was made.

Cleaned up well after Jordie Barrett's clever kick in behind. Still had work to do when he took a pass from Lowe, but beat to ABs to the left-hand corner for his try. Was brave under some high balls. 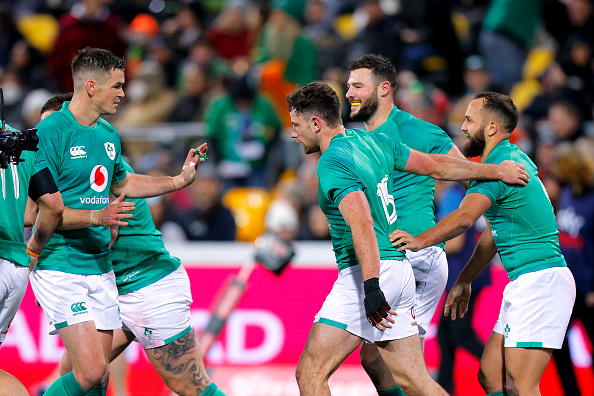 Early knock-on, but did not affect him as he claimed the next steepler. Had a kick up the line blocked down by Sevu Reece. Stepped by Akira Ioane for his try. Made seven tackles as Ireland needed to scramble, after the break.

Made two big tackles in the space of 20 seconds, on 33 minutes. Timed his run well to go over unopposed for his try. Rushed up for a big tackle on Beauden Barrett that forced New Zealand to kick the ball away. 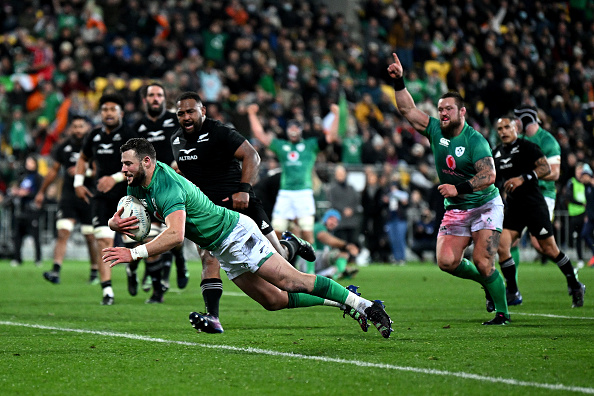 Unfortunate to give away a breakdown penalty when he lost his footing. Lovely, selfless pass to put Henshaw over for his try. Won a breakdown turnover before half-time. Footwork was making gains on each carry. Went for 14 tackles as Ireland pressed up, but missed six.

So, so close to a sublime 50:22 kick up the touchline. Sublime pass, when he knew Barrett was going to nail him, for that Keenan pass. Was used almost as an inside centre on a few carries off scrums and lineouts. Made a bad call, on 68 minutes, by not finding touch from a kick inside his 22.

Missed an early conversion, from out wide, and was short with a kick to the corner. Stepped Will Jordan on one carry. Unhappy with himself when he gained only 15 metres, under no pressure, with a clearing kick. Nailed a 49-metre penalty and a touchline conversion, as he found his range. Under-cooked an up-and-under from inside his 22.

Grubber-kicked the ball straight to Aaron Smith, ending a promising attack. Knocked on a couple of high balls, but tackled well a second time to limit the damage.

Big hit on Laulala forced a forward pass turnover inside the Kiwi 22. Fortunate not to be red-carded for going in too high on Retallick.

Lineout throwing was on the mark, but the Kiwis were not exactly flinging bodies in the air to contest. Some good carries but got isolated and turned over, just as the half-time hooter sounded. Fell off Akira Ioane tackle before the flanker's try.

Not as many carries as we are used to from the big man, but tackled like a demon and scrummed well. Landed 14 tackles.

Got a big lineout steal, on eight minutes. Brave intercept gave Ireland stalled some early Kiwi momentum in the second half. Won Ireland a penalty on the halfway line with a breakdown poach. Won a huge penalty inside his 22, at the breakdown... again. Made a THIRD turnover, and second inside his 22, on 73 minutes. Then made a FOURTH, on 75.

Safe as houses on the early lineouts. Sank in some huge hits in defence. Superb lineout steal, on 36 minutes. Solid in the air on restarts. Some doubted him after the First Test, but responded superbly.

Showed up on the left wing in an early Irish attack. Couldn't control a bouncing ball from a restart and his knock-on gave the ABs a scrum on the right wing. Won his side a turnover when he locked onto Codie Taylor at a Kiwi maul. Sank 10 tackles.

Got over for a fourth minute try [his sixth of the season for Ireland]. Massive turnover won, inside his 22, when he latched onto Rieko Ioane. Teamed up with Porter to force a turnover. 20+ tackles again.

Great early line break. Gave away a penalty for tackling Savea too high. Tackled anything in black that moved. Shut down Savea on a scrum carry, near the posts. Stuck in 18 tackles.

Powered past THREE men for his crucial try. Not straight on a 71st minute lineout.

Had an earlier stint, during the Porter sin-bin.

Big scrum when he entered the fray.

Some big tackles, including one on Mo'unga.