They will be breathing down New Zealand's neck if they keep up their form on the summer tour to Australia.

Ireland confirmed themselves as the best team in the northern hemisphere, this weekend, by defeating former Six Nations champions England and claiming a momentous Grand Slam.

Joe Schmidt's men had climbed to second in the rugby world rankings, last weekend, after seeing off Scotland to claim their third Six Nations title in five years. They could have been overtaken by England, again, had Eddie Jones' men defeated them at Twickenham.

The moment Garry Ringrose pounced to take advantage of a high Johnny Sexton bomb, early in the first half, there was never any fear of that happening.

As it stands, though, Ireland's victory in London has secured a further rankings boost. They remain second but, having picked up 1.27 points for beating England away, they climb to a best ever tally of 89.11 points. 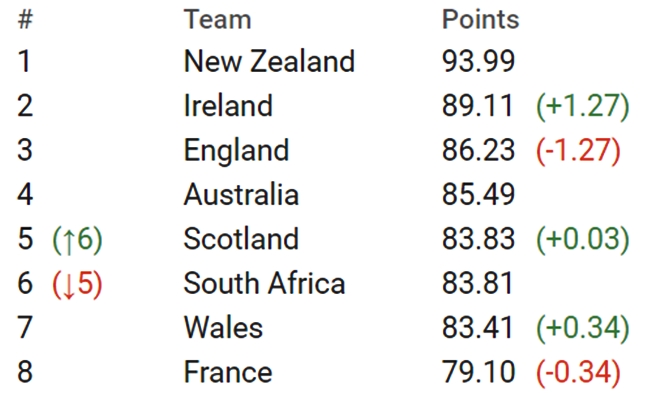 This rankings gee-up will be officially confirmed by World Rugby on Monday afternoon. It draws Ireland closer still to world champions New Zealand.

END_OF_DOCUMENT_TOKEN_TO_BE_REPLACED

Ireland are set to face the All Blacks in Dublin in November of this year and the tie could well be for rugby's No.1 spot if the men in green have a prosperous summer tour Down Under.

Australia will entertain the Irish in three Test matches, this June. Winning the Test Series 3-0 would see Ireland amass at least 3 more world ranking points and put them within touching distance of New Zealand.

Some may caution that rankings stand for little, what with World Cup 2019 seeding already settled, but this must surely be the next goal for an Ireland team on a best ever 12-match winning streak.

The age profile of this Ireland squad, with breakthrough stars such as James Ryan, Jordan Larmour and Jacob Stockdale excelling of late, means Ireland should still be in great stead when that World Cup rolls around.


popular
"There's times I do think I probably have let people down but in fairness, I have got good support from back home"
Goal disallowed in Dublin SFC because player wasn't wearing his gumshield
The SportsJOE 12 o'clock quiz | Day 138
The SportsJOE 12 o'clock quiz | Day 137
"That's a risk I'd be willing to take" - Byrne ready and raring for a championship
"I was asked to be the team doctor. I thought well I'll never play senior camogie for Galway"
All hail Alexis Sanchez, the man who played Manchester United like a piano
You may also like
2 weeks ago
Ireland set for Six Nations decider in Paris on October 31
2 weeks ago
We challenge any rugby player to top Jack McGrath's lockdown hobby
3 weeks ago
James McClean opens up on sickening, Covid-related hate mail
3 weeks ago
When the President interrupted a Euro 88 pint between Charlton and Dunphy
3 weeks ago
How an uncultured Englishman conquered Ireland's sporting heart
3 weeks ago
The SportsJOE 12 o'clock quiz | Jack Charlton special (Day 112)
Next Page