Ireland are the Six Nations Grand Slam champions for only the third time in their history after beating England at Twickenham in a thriller.

Joe Schmidt's side won all five matches and Olé, Olé, Olé rang out as they did enough to get over the line in style. There was a consolation try from England at the death but the Slam was Ireland's, and on St Patrick's Day too.

Ireland were warned that England would tear out of the traps in the opening stages but they flipped the script on its head to plunder a good lead. Johnny Sexton pumped a hih ball into the London air, TRob Kearney pressured Anthony Watson into making a mistake and Garry Ringrose was there to pounce.

7-0 could have been 10-0 but Sexton missed a penalty but Ireland were not done yet. Bundee Aki made a fantastic break and teed up CJ Stander for a charge. He looked to have been brought down just shy of the line but he was smart enough to touch the ball off the base of the posts.

Ireland were 14-0 ahead and looking good but the hosts fought back. Peter O'Mahony was sin-binned amid fierce England pressure and Owen Farrell made them pay with a sweet grubber kick to set up Jonny May for a try.

Ireland were looking good for a 14-5 half-time lead but attacked again, in the final minutes of a fraught half, and were left celebrating another favourable video review after Jacob Stockdale's excellent chip and chase. Joey Carbery (on for Sexton) nailed a touchline conversion to make it 21-5 at the break. 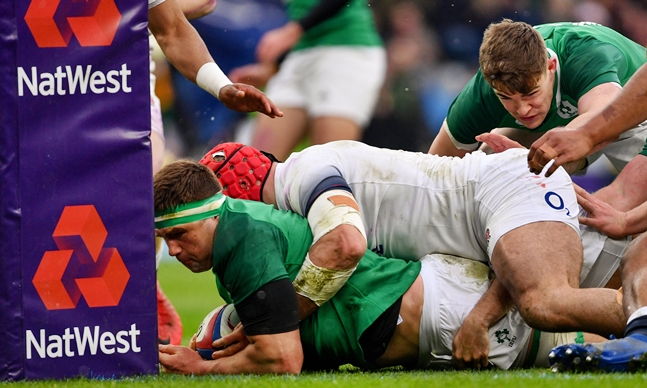 END_OF_DOCUMENT_TOKEN_TO_BE_REPLACED

The second half was all about weathering the English storm and then jabbing back. Ireland did that perfectly.

There was some stout, heroic defence but it waas Ireland who moved the scoreboard first, scrumhalf Conor Murray kicking over a penalty to make it 24-5.

England hit back with another Daly try but men like Dan Leavy, Stander, Peter O'Mahony, Tadhg Furlong and more stood up time and again. There was a late Jonny May try but it was not enough to prevent the Slam going to Ireland.

popular
The SportsJOE 12 o'clock quiz | Day 140
Only a Champions League fanatic would get full marks in this quiz
Rory McIlroy speaks superbly on conscience call that cost him at US PGA
Jonny Hayes and Aberdeen teammates apologise after Covid cluster shutdown
Frustration boils over for Shane Lowry at PGA Championship
Robin McBryde on training session that sent message to Leinster's international stars
"There's times I do think I probably have let people down but in fairness, I have got good support from back home"
You may also like
2 weeks ago
Ireland set for Six Nations decider in Paris on October 31
3 weeks ago
We challenge any rugby player to top Jack McGrath's lockdown hobby
3 weeks ago
James McClean opens up on sickening, Covid-related hate mail
4 weeks ago
When the President interrupted a Euro 88 pint between Charlton and Dunphy
4 weeks ago
How an uncultured Englishman conquered Ireland's sporting heart
4 weeks ago
The SportsJOE 12 o'clock quiz | Jack Charlton special (Day 112)
Next Page