It was a tale of two high tackles in Ireland's World Rugby U20 Championship encounter with Australia in Santa Fe.

Ireland were looking to follow-up their opening match victory over England against the Junior Wallabies, but an early red card put them in a big hole.

The Aussies took a 3-0 lead after only five minutes when outhalf Will Harrison dinked over a penalty. It was a riveting, fast-paced start but there was a long pause when Munster back-row John Hodnett was tackled around the head by Semisi Tupou.

The Australian centre was given the benefit of the doubt as Hodnett was deemed to have dipped into the tackle and the force of the hit was only 'medium'.

Just over five minutes later and another card was flashed. This time it was in Ireland's direction and, unfortunately for them, it was red.

Lock Ryan Baird darted out of the defensive line with his sights set on Harrison. When the Aussie 10 juggled the ball, he planted his feet and was left open to a hit.

Baird should have dipped lower in his tackle and the fact that he connected with Harrison's head meant he left himself open to slow-motion replays. Match officials decided there was 'a high level of force and danger'.

"I've no choice but to give a red card," stated the match referee and Baird was sent marching.

These new high tackle laws are being trialled and enforced by World Rugby at these championships and could soon take hold in the senior game.

Ireland fell 10-0 behind before Munster scrum-half Craig Casey sniped brilliantly off the back of a seven-man Irish scrum to score. Jake Flannery's conversion made it 10-7.

Flannery was then so, so fortunate not to see red when he cleared out Angus Bell with a dangerous tip tackle. 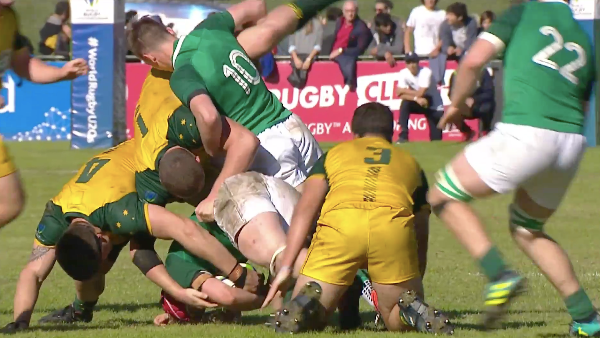 The ref, perhaps cognisant of his earlier red card call, just gave a penalty and Ireland were spared again when Harrison's attempt missed.


popular
Paul O'Donovan busts the cliches and leaves the mystery behind him in one more emphatic interview
Ireland's rowing heroes on what everyone was shouting as they beat Team GB to bronze
Next time someone doesn't cut you slack for commuting to training, show them Joe Canning's words
Aidan O'Shea on gym work, training over lockdown and the importance of younger players bulking up
Warren Gatland with great response after being asked if he'll set up Twitter account
People are shocked after finding out how much an Olympic gold medal is actually worth
BREAKING: Grainne Murphy issues heartfelt statement as she retires from international swimming

You may also like
2 days ago
Ireland's rowing heroes on what everyone was shouting as they beat Team GB to bronze
2 days ago
"Hopefully it gives young girls real hope that anything is possible. If we can do it, anyone can!"
1 week ago
Football is coming to its 'real' home as Dublin set to host major tournament final
2 weeks ago
Full Ireland ratings as Ronan Kelleher inspires USA thrashing
3 weeks ago
Pre-match comments about Josh van der Flier put performance into perspective
3 weeks ago
Full Ireland ratings as Andy Farrell's men survive one hell of a scare
Next Page